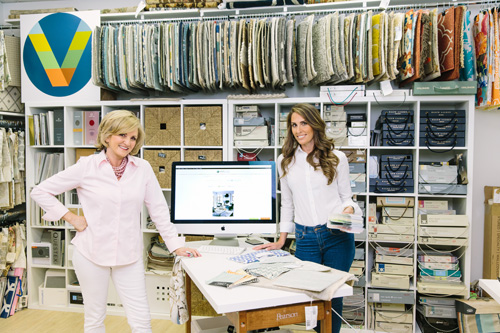 Cathy Maready & Megan Smith, co-founders | Year Founded: 2016 | No. of Employees: 7 (Photo by Lindsey A. Miller)
An online company born from a Wilmington interior design firm allows clients to use the internet to turn their houses into homes.

Vavaroom was founded by Cathy Maready, owner of Elephant Ears, a high-end interior design firm that opened in Wilmington in 1996, and Elephant Ears designer Megan Smith.

The website allows homeowners to design rooms with the help of qualified designers at Elephant Ears, but at a fraction of the typical cost.

“We saw a niche between Megan’s friends and my friends and some people that are just a little intimidated about calling a designer, or they immediately think it will be way too expensive to hire a designer,” Maready said. “So we dreamed up something that could be affordable and online.”

With the goal of helping to produce at least 50 designed rooms a month, Vavaroom officially launched in April after a year and a half of development.

“We wanted the process of Vavaroom to be fun and to be enjoyable. There’s a big crowd now watching HGTV, and a lot of them have an interest in interior design and want to do these DIY projects. With our website, they get to work with us and they get to measure their room and their windows and be part of the design process,” Smith said.

Vavaroom’s target market are clients who are between 35 and 48 years old and part of two-income families. The homes they’ll typically own will be in the $450,000 to $1 million price range, Maready said.

The site’s packages cost $199, $399 and $799. The lowest price gets you a color palette and some suggestions while the $399 package, the most popular, includes 3-D renderings, a shopping list and floor plan, Maready said.

After clients take measurements (Vavaroom tells them how to do it), fill out a questionnaire and download pictures, “they get online with us via Skype or Facetime or email, whatever avenue they want to communicate with us on,” Maready said. “We prefer something where we can see their room and listen to who they are, what their passions are, what their desires are.”

For client Alex King, a former banker and a real estate investor, the process was fun, he said.

“The style was great, and they stayed in the budget,” he said. “As usual, some of the items they picked I would never have picked out without their help. That was what was fun about it.”

He ended up selling the house he was working on through Vavaroom, but still was able to use the renderings produced to show friends and potential buyers.

“We’ve designed the website to be on a national platform; however, we are starting out regionally because we feel like we’ve got a following with Elephant Ears,” Maready said.