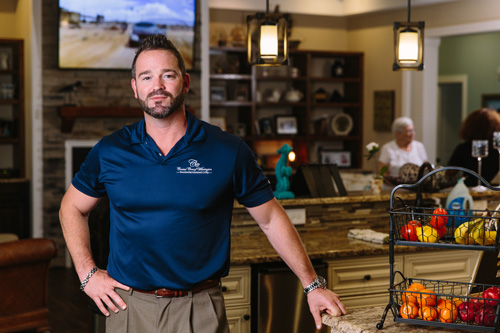 Justin Luquire, president/founder | Year Founded: 2016 | No. of Employees: 18 (Photo by Lindsey A. Miller)
Less than a year after opening Coastal Cove of Wilmington, president and founder Justin LuQuire is working on plans to expand.

The 4,300-square-foot house that LuQuire developed in Wilmington is nestled in a woodsy residential area near Masonboro Loop Road, and from the outside, doesn’t look like something you’d call a “facility.”

But Coastal Cove is actually a residential care home with six private bedrooms for people in stages of Alzheimer’s or dementia where they need more help than some traditional assisted living can provide but less help than a locked skilled-nursing facility.

Coastal Cove has a waiting list, and LuQuire hopes to build additional facilities like it in Leland and Southport.

The idea to start the for-profit Coastal Cove stemmed in part from LuQuire’s family history of working in health care. LuQuire, who also has a background in banking and a master’s degree in investment management from Campbell University, heard about the need for housing like Coastal Cove from clients at A Peace of Home, his family’s geriatric care management company.

“One of the biggest things we’d hear from families, ‘Is there anything smaller out there, more like a home? Everything feels like I’m bringing them to a hospital or bringing them somewhere that’s a lot more institutional,’” LuQuire said. “So I took what they said and researched this idea and started it.”

Coastal Cove of Wilmington opened in September. Residents pay all-inclusive fees of $6,950 to $7,500, depending on room size.

Each room has a private bathroom.

On a recent weekday, a Coastal Cove resident and Sharon LuQuire, Justin’s mother and a licensed nursing home administrator, worked together in the facility’s marble-countertop kitchen to make egg salad.

If they want, the residents can help prepare the home-cooked meals served at Coastal Cove, which has an induction stove for safety and a lower marble countertop for those in wheelchairs to use in cutting vegetables or other tasks, Justin LuQuire said.

Cooking, eating and going on recreational outings together are part of the care Coastal Cove provides that also has medical benefits, said Thellia Meadows, resident care specialist at Coastal Cove.

“I think this facility is a role model for other facilities. Social engagement is what slows the dementia process. If you can keep them engaged and involved in activities, the quality of life just increases significantly,” Meadows said.

Among other types, music therapy is another key component.

“If they don’t remember anything, music is something they can go back in their mind and remember the words and it makes them happy,” Meadows said.

The main point of Coastal Cove is to make residents feel at home while still offering the safety and care benefits of a facility, Justin LuQuire said.

“I think this model is the missing link in long-term care facilities,” he said.