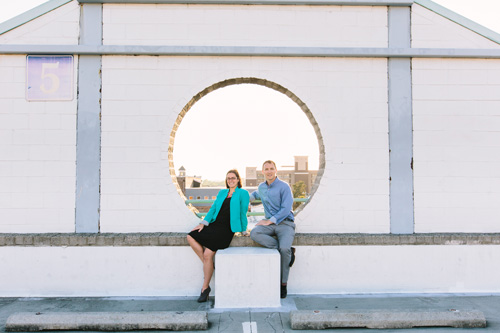 Laura Brogdon, organizer, and Sean Ahlum, founding member | Year Founded: 2015 (Photo by Lindsey A. Miller)
For the past 23 years, Cucalorus has developed strong brand recognition in the film festival industry. But additions to the event lineup showcasing innovation and entrepreneurship in the region, has taken that brand a step further.

Cucalorus Connect, a five-day business conference that runs in conjunction with the Cucalorus Film Festival in November, is in its third year. The idea behind it came from a few business-minded individuals in the community, said Sean Ahlum, director of tekMountain and founding member of Cucalorus Connect.

“What we really were thinking is … filmmakers in general are entrepreneurial. Every film that is made is an entrepreneurial startup effort,” Ahlum said. “And the fact that the festival was going on and had a brand name … what we thought was that it wouldn’t be necessary to create yet another thing in the city of Wilmington. And that’s why we paired with Cucalorus.”

In 2014, Laura Brogdon, Connect organizer and manager of programs and operations at University of North Carolina Wilmington’s Center for Innovation and Entrepreneurship, worked to merge the school’s Coastal Connect Entrepreneur and Capital Conference with Cucalorus by partnering entrepreneurs with filmmakers for their first 10x10 Challenge. That contest, still part of the Cucalorus Connect schedule, brings together startups and filmmakers to make a video during the week.

Dan Brawley, executive director of the Cucalorus Film Foundation, said the film and business industries aligned well with the idea behind the annual festival.

The Cucalorus Connect conference had a total attendance of 3,182 people in its first two years and has grown from 40 events in its first year to 50 events in 2016, Brawley said. The conference includes a variety of panels, keynotes, workshops and other events geared to entrepreneurs.

This year the conference will be held at Windell Daniels Hall, a 5,722-square-foot event space in Cape Fear Community College’s Union Station building. This is the first year Cucalorus Connect will take place under one roof.

Connect is also working more with UNCW this year, connecting with the Cameron School of Business’ Entrepreneurship Week, Brogdon said.

As organizers pace for the upcoming festival, they are working to establish an advisory board and name a director to shape the future of Connect.

“If you look at what South by Southwest has done for Austin, just think of what this can do for Wilmington,” Ahlum said.

Ahlum envisions the conference much like a startup that has the potential to grow Cucalorus into the region’s “premiere festival.”

“We knew it was going to take about three years to bake the idea and figure out where the business opportunities are in the area. We’re figuring out ways to distinguish ourselves in that market to bring more and more people in from out of town,” Brawley said. “We’ve really just gotten started.”