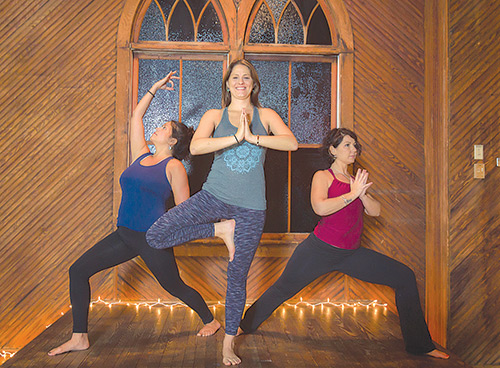 According to an article published by Forbes, the number of women-owned businesses has increased by 59 percent since 1997.

In addition, research from the National Women’s Business Council shows that an increasing number of women are starting businesses today, although there are still opportunities for significant growth. The council reports that women have been entering the ranks of business ownership in the U.S. at rates far exceeding the national average. In the council’s annual report, chair Carla Harris wrote “the entrepreneurial spirit is alive and well, and women’s appetite for entrepreneurship is at an all-time high.”

As part of the Business Journal’s Women in Business special section, we looked at two very different businesses owned by young female entrepreneurs who embody such spirit.

In school she was the kid with the maps, and Danielle Boisse had a lot of maps.

“I used to take maps to school, when I was a kid, maps of anywhere in the South,” Boisse said. “I always knew I wanted to move. I did not want to stay in Massachusetts.”

She didn’t stay, and Massachusetts’ loss has become North Carolina’s gain. Today Boisse is the owner of the Port City Design Group, an interior design firm focused on both residential and commercial interiors.

“When I was in college and looking for places to live and did research, I was looking for a place with some substance to it. Wilmington had history, and I felt there was opportunity with the retirement community here,” she said as she sat in her firm’s office just northeast of the airport.

“So the day I graduated college I packed my car with everything I owned, got rid of all my winter clothes and drove down to Wilmington – 16 hours. I had never been to the Carolinas at all,” she said.

The Endicott College graduate scored work with a local design firm in the area, until one day she had a most fortuitous meeting.

“I was 25 years old, and I was at lunch one day with one of my subcontractors,” Boisse recalled, “and they asked me a question that would change my life. They said ‘When are you going to open your own business?’

“I said ‘Well I would love to, but I have student loan debt, and I don’t see how that would be possible.’”

“And they said, ‘We will loan you the money tomorrow. We feel you are ready.’”

Boisse launched her Port City Design Group two years ago and now has a staff of two in Wilmington and a satellite office in Southport. Early next year she breaks ground on her own building, which will include office and warehouse space of 5,000 square feet.

Her commercial clients in the area include Magnolia Greens, Compass Pointe Pavilion, RipXFit Fitness Studio, Tarantelli’s Ristorante and Waterman’s Brewing, which Boisse said will open next year in the former Fibber McGees location at 1610 Pavilion Place.

That’s not to say there isn’t pressure, as with any startup, and a host of challenges.

“The most challenging part – is the fear of failure. I think as entrepreneurs we all have really high standards for ourselves,” Boisse said. “When something great happens we get really excited, and the next day something could fall through, and we feel like we’re a failure.”

Boisse said her business is up 25 percent over 2015. Her advice for a young woman looking to be an entrepreneur is simple and direct.

“The first is it has to be your passion ... You are not going to work 20 hour days and not sleep and not have time to shower every day unless it’s your passion,” she said.

“The second thing is buckle up and get ready for three years of working 16-20 hour days ... Because you have to put everything in it in the first few years in order for there to be a future. You don’t just open a business, and your employees take it to the next level. You have to do that, you have to set the example.”

About seven miles southwest of Port City Design there is a business with a much different story to share. It’s in an old church and has a more spiritual angle.

Terra Sol Sanctuary at 507 Castle St. is a yoga studio opened by three women in August.

“It wasn’t something that was preplanned,” DeConti said while sipping a drink up the street at Luna Caffe.

“The three of us – Becca, Alexis and myself – we have been teaching yoga throughout the town, and we came across this space on Castle Street via Craigslist,” DeConti said. “Becca found it and contacted us, and we looked at it. There was a lot of momentum, towards, ‘Yeah, let’s do this.’”

Just one month later the former antiques shop in an old church was Terra Sol Sanctuary, a yoga studio.

Since then the studio has built a roster of 20 yoga instructors.

“I was practicing yoga a lot, and I just loved it,” Abbate said. “I didn’t think about teaching. But it just kind of happened.”

Terra Sol, in the same vein as Port City Design, has chosen to turn to the internet to help build the young business’s following.

But most of their business has been built through word of mouth. The yoga community in the region is tight-knit and collaborative.

“Before we opened we met with all the instructors and made sure that they felt like we weren’t necessarily the owners, but that everybody was part owner in all of this,” DeConti said, “seeing ourselves more as founders than owners.
“It’s less competition and more collaboration,” she added.

“It’s more about the vibe of Terra Sol that we’re trying to let people feel when they come in and say ‘Wow this is a place where I felt I was a part of it, a community.’”