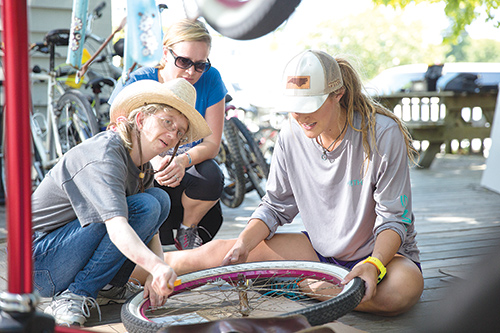 Just a few years ago Stephanie Glatt found herself middle aged and underemployed when her hours at a cleaning and food service company were chipped away until she could only work about nine hours per week for up to 24 weeks each year.

She set out to find new work, but the job hunt was particularly challenging for Glatt, who has moderate intellectual disabilities. Nearly four years of searching yielded only two interviews for jobs, neither of which matched her skill set.

But 2016 is shaping up much differently for 40-year-old Glatt who now divides most of her time between working as a bike mechanic at Special Pedals Inc. and making her specialty coffees as a barista at Bitty & Beau’s Coffee.

“It keeps me busy, no doubt,” Glatt said of her two jobs.

Glatt is just one of the dozens of local residents finding new job opportunities from a growing number of organizations focused on helping marginalized employees find work while raising awareness about employment needs in the Wilmington area.

“It was just that before, no one had really pointed the problem out,” said Leah Sherrill, who was inspired to start Special Pedals after watching Glatt’s discouraging job search. “Now it kind of is on the forefront, but it just took a couple people to say, ‘No, we’re going to quit talking  about a solution. Let’s just do it.’”

Like Bitty & Beau’s Coffee, Special Pedals is tailored to employ and empower adults with disabilities. Instead of peddling coffee, the nonprofit’s employees repair and sell bicycles for an hourly rate while receiving enough individualized attention to learn something new during each shift.

“I look at it like the classroom,” said Sherrill, who graduated from University of North Carolina Wilmington in May with a degree in special education.

“They’ve received this one-on-one instruction their whole entire lives,” she said, “and then once they graduate the problem really isn’t that there aren’t jobs, but that one-on-one training kind of ceases to exist for jobs more specific to their skill level.”

Since starting the nonprofit last summer with $1,000 raised from a GoFundMe account, Sherrill and her three employees have learned a lot about bikes and business.

The nonprofit uses donated inventory and will soon bring in bikes that have been seized and abandoned on UNCW’s campus.

By spring, Sherrill hopes to have a location on UNCW’s campus for a bike shop and a box truck so the nonprofit can bring its work on the road. The five-year goal is to employ at least five adults with disabilities at the bike shop and have similar businesses running at three other college campuses.

While her focus now is on bikes, Sherrill sees opportunities to train adults with disabilities at various jobs commonly found on college campuses, such as those at gyms, post offices and snack shops, with the option of later moving to a similar position in the broader community.

Part of creating a fulfilling work experience is taking into account an employee’s wants, needs and preferences, and that might not include bike mechanics, Sherrill said.

“The whole business plan could work for not just bikes but for whatever is open,” she said.

Across town, a new restaurant has its sights set on giving another group of marginalized workers a chance for employment while bringing in dollars for the business.

At The Foxes Boxes, a farm-to-table restaurant set to open this fall at 622 N. Fourth St., the Fox family plans to hire people who face employment obstacles ranging from low literacy skills to criminal backgrounds.

“We don’t want to be so narrow that we’re only taking, say, former gang members or formerly incarcerated people. We want the whole gamut,” Rachel Bodkin-Fox said. “Whatever has kept them from getting employment – gainful employment that allows them to support their family comfortably – we want to help get them prepared.”

During a three-month paid externship at the restaurant, the Foxes will teach soft skills like customer service, teamwork and time management, as well as practical knowledge such as sanitation rules and point-of-sale transactions.

Randy Fox, who spent more than 25 years in the corporate restaurant industry, will help set the curriculum and mentor participants with the hopes that graduates will gain enough service industry skills to tap into a growing downtown restaurant, hotel and retail scene, Bodkin-Fox said.

“This is an externship,” she said. “We’re going to work you out into your own career, your own place.”

Jana Jones Halls, the executive director at BRC on the Prevention of Youth Violence, said she sees the restaurant as one potential bridge between new economic development coming into the Brooklyn Arts District and the families who have lived in the area for generations.

“I think their goal and mission is to involve the community that’s already here and to provide opportunities for the community,” she said.

Jones Halls said it’s rare to find local for-profit businesses take such a specific interest in the community’s employment needs, but it’s something she’d like to see more often.

“I think the more we can have the better, and hopefully they’ll be building a model that can be replicated with not just restaurants,” she said.

Local businesses already seem to have taken an interest in the business model of Bitty & Beau’s Coffee, a coffee shop run by people with intellectual and developmental disabilities.

Since the coffee shop opened in January, founder Amy Wright said PPD, New Hanover Regional Medical Center and other local companies have asked about how to bring people with intellectual and developmental disabilities onto their teams.

She directs them to Able to Work USA, the nonprofit that owns Bitty & Beau’s Coffee, and helps corrects some misconceptions about workers’ abilities and resources.

For example, employers might expect hiring someone with intellectual or developmental disabilities to require too much time and money to train, but these employees often have job coaches who help them master tasks needed for the job.

“You basically don’t have to make a lot of accommodations to integrate them into the workforce,” Wright said. “And there is a level of customer service that our employees bring that would benefit any company.”

But more often, people with disabilities are just not on businesses’ radars at all, Wright said.

“It’s really just kind of about thinking outside the box and going ‘OK, I’m going to give this person a chance,’” she said.

While Bitty & Beau’s Coffee is concerned with increasing social profit, the shop has also had financial success with about $500,000 expected in sales this year.

Wright anticipates that projection will rise with a recent expansion into a larger building at 4949 New Centre Drive. The move will also allow the nonprofit to hire 21 more employees, up from 19 at its original location on Wrightsville Avenue.

As the nonprofit continues to grow and show the community the value of workers with intellectual and developmental disabilities, Wright said she’s excited about seeing more inclusive workplaces pop up in Wilmington.

“To have other businesses that are forming and adopting these kind of mission statements too, I think it’s fantastic,” she said.