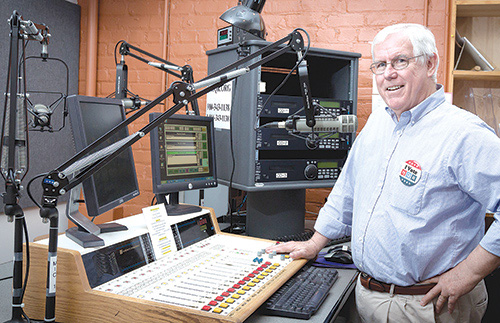 Walking into WHQR’s offices on North Front Street, visitors are immediately put at ease by pine flooring, blasted brick and a vibrant display of community art as station personnel walk briskly from one task to the next.

But Jeff Hunter, who pursues business underwriting and major gifts for the station, still recalls the dark days.

“The staff was asked to roll up their sleeves and put away job titles,” Hunter said, thinking back to 2008. “We were just always on call.”

WHQR-FM (91.3) was in financial turmoil, largely due to managerial mismanagement, Hunter explained, leading the board of directors to dismiss the station manager and cut payroll by 55 percent. But, despite the board’s 18-month turnaround effort, the NPR affiliate had amassed $400,000 in debt by early 2010, and there was talk of University of North Carolina at Chapel Hill’s station acquiring the Wilmington operation.

News in the broadcast business travels fast, and Cleve Callison soon got wind of the turmoil.

A veteran manager of public radio stations at Wake Forest University and Ohio’s Miami University, Callison dashed off a letter to WHQR’s temporary leadership. A Skype interview followed, and Callison soon found himself picking through the station’s financial rubble.

“I was really interested in that challenge,” he said recently.

Callison and the board formulated a strategic plan, buttressed by a $1.5 million capital campaign carefully launched through meetings with dozens of community leaders. By June 2014, the station had shed its debt and was building a cash reserve.

Early gifts to the campaign allowed the station to purchase a second frequency (96.7) for a classical music service.

Other changes – a repeater signal that extended 91.3’s programming into Myrtle Beach, the purchase of WHQR’s third-floor space in the Warwick Building to forego monthly mortgage payments and the expansion of locally produced programs – engendered greater community confidence in the nonprofit’s future.

By April 2016, the station had achieved more than $1.15 million of its fundraising goal as a result of the generosity of 120 individual donors as well as foundations and local businesses, the latter having more than doubled their total underwriting commitment over three years, Callison said.

And while WHQR complements its capital campaign with on-air solicitations, pledge drives like this year’s for a bit more than $300,000 now span only 15 days annually as opposed to the 26 when Callison first took over.

Reflecting on the station’s dark days, there’s a sense of satisfaction among the nonprofit’s employees about how far public radio in southeastern North Carolina has come.

“We’re in a much more solid position now than we were in a long time,” Callison said.

MADE: Catching a wave of demand