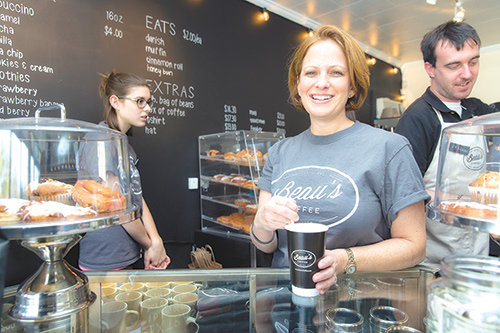 Long past rush hour on a recent Wednesday morning, customers filled a local coffee shop with laughter and conversation.

Amy Wright and her husband, Ben, opened Beau’s Coffee in January at 4414 Wrightsville Ave. in Wilmington as a means of employing people with intellectual and developmental disabilities (IDD).

The two youngest of the Wrights’ four children – the shop’s namesake Beau, 11, and Bitty, 6, – have Down syndrome, and the Wrights have been advocates for people with disabilities for several years. Now Beau’s Coffee employs 19 workers who have intellectual or developmental disabilities.

That number is expected to multiply in Wilmington and beyond.

“The idea [for the coffee shop] came to me in November, and it was a lightning bolt. It hit me that this was the next step our family needed to take,” Amy Wright said.

That lightning bolt also sparked a flood of public interest, including The Rachael Ray Show featuring Beau’s Coffee in a segment in March.

“I want to see a Beau’s Coffee on every corner from coast to coast,” Ray exclaimed during the segment.

That wish might come true. The Wrights have created a subsidiary of the nonprofit organization that owns Beau’s, Able to Work USA, to franchise Beau’s Coffee.

“We’ve been contacted by a hundred different people around the country who want to open a Beau’s Coffee,” Amy Wright said.

Franchisees will be able to decide for themselves whether they want to run their Beau’s Coffee locations as for-profit or nonprofit, she said.

The Wrights started Able to Work USA “to help people with intellectual disabilities find meaningful employment and also help employers find candidates that were capable and qualified that happened to have IDD,” Amy Wright said. “It was really an uphill battle to try to get employers to think outside the box and hire people with disabilities. We felt like Beau’s Coffee was the perfect way to actually demonstrate to our community and our country how capable they actually are.”

More shops following the Beau’s model will boost that goal, she said.

“This experience, we have found, 100 percent works, and we want to replicate that and support other people in doing that,” Amy Wright said.

She said in addition to the Beau’s concept growing in other parts of the country, Beau’s Coffee will also be growing in Wilmington soon. The Wrights are going to open a second location that will serve as the organization’s headquarters and a franchisee training facility.

For the Wrights, Beau’s Coffee has become a family and community endeavor. Beau’s and Bitty’s sisters Lillie, 17, and Emma Grace, 15, often head there after school to help out. The coffee brewed at Beau’s comes from local business Kaldi Gourmet Coffee Roasters, and the baked goods are from Wilmington-based Farmin’.

“We just are so grateful that our community has supported this like they have,” Amy Wright said. “Our whole motivation is to help people see that every life has value.”