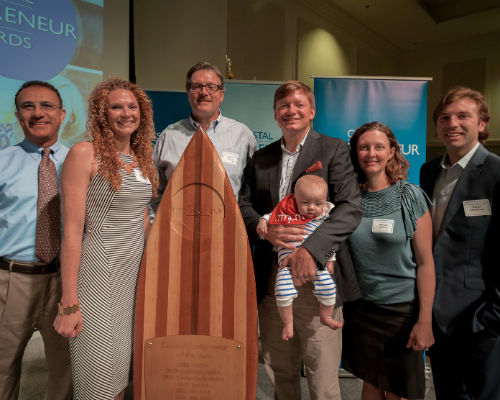 The fledgling company, a CEA winner in the health care category this year, impressed the judges with how the current leadership team has streamlined the company’s operations and increased both capacity and revenues since bringing Mimijumi headquarters to Wilmington from Nashville 18 months ago.

The awards are a joint program by the Greater Wilmington Business Journal and University of North Carolina Wilmington's Center for Innovation and Entrepreneurship. Thursday's event took place at UNCW's Burney Center.

“This [award] was a vote of faith, of confidence in the direction where they see us headed,” Mimijumi CEO Brendan Collins said following the event. “There is no question this will raise our profile. Past winners are telling us what a transformational effect this [award] has. We want to capitalize on it while we have momentum.”

Mimijumi manufactures and sells an ergonomic baby bottle with a nipple designed to replicate the breastfeeding experience. The company was founded by two Nashville-area physicians who were overseeing a far-flung operation in their spare time, with manufacture and assembly in different European countries.

When Seahawk Innovations LLC, a venture capital company based at UNCW's Center for Innovation and Entrepreneurship, invested in the startup, the investors brought Mimijumi to Wilmington and began a reorganization that would make it possible to ramp up sales and revenues, company officials said.

While manufacture of the bottle parts is still done in Europe, assembly and distribution operations are now based locally and the company is expanding its marketing and sales both domestically and abroad. Production capabilities have expanded to 1 million bottles per year, according to Collins, who said in an earlier interview that in 2014, Mimijumi sold 50,000 bottles. He believes the company can triple or quadruple that figure in 2015 through educational outreach to new mothers and an enhanced sales and distribution effort .

In addition to its category award, Mimijumi officials took away the new CEA winner’s trophy: a wood inlay surfboard replica created by participants at the Kids Making It nonprofit. Each year, the trophy will pass from the previous year’s overall winner to the next, and the name of each winning company will be inscribed on the surfboard.