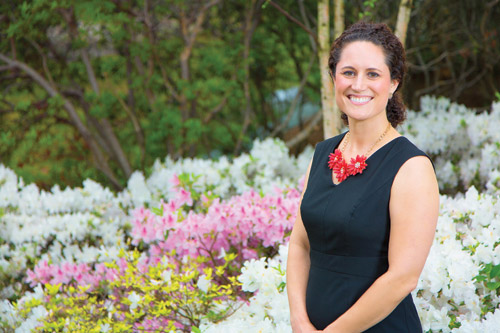 Melissa Phillippi, president | Year Founded: 2015 | No. of Employees: 3 (Photo by Chris Brehmer)
In less than three months, a Wilmington-based company that offers businesses help with improving employee performance has grown to serve more than 20 clients.

Launched in February by Cornerstone Business Advisors, Performance Culture Inc. and its web-based platform have responded to a need in the business community for a new, simple tool to produce effective conversations between managers and employees, said Melissa Phillippi, company president.

The platform stresses continuous coaching, timely feedback and meaningful recognition as key to
seeing improvements, according to Performance Culture’s description.

“So many companies either have nothing in place for performance reviews or a very time-consuming, burdensome process that everybody goes through the motions on, and at the end of the day come to disdain. And it’s therefore ineffective,” said Phillippi, who helped design Performance Culture’s product with Cornerstone Business Advisors founder and CEO Dallas Romanowski.

Such reviews, she said, should be more than just a way to determine rewards and bonuses because many people are motivated by money only in the short-term.

“They should be seen as a platform to coach and develop your employees,” Phillippi said. “Studies show that employees are more motivated and have higher workplace satisfaction when they work within an environment where performance management is a component of everyday life.”

Performance Culture Inc. believes in a merit-based system, she explained, but another factor
should be part of the whole picture.

Performance Culture’s system weights behaviors in the same way as performance, with the help of a two-by-two grid, for an overall employee score.

Phillippi said the company’s growth goal is to have 2,500 clients with 100,000 employees using the
system.

“We see us doing what we do today plus leveraging all of these strategic partners around the world and launching things like leadership conferences, partner conferences, business owner conferences, which will, at the end of the day, help employees reach their full potential.” Phillippi said.

Performance Culture recently participated as an invited vendor in a convention for a large company’s franchise owners in Omaha, Nebraska. The local firm’s booth attracted a lot of attention, Phillippi said.

“We were blown away by all the excitement,” she said. “Even after they shut down the vendor showcase, we still had people in line to talk to us … they know this is a missing component in their organization, as it is in many organizations.”