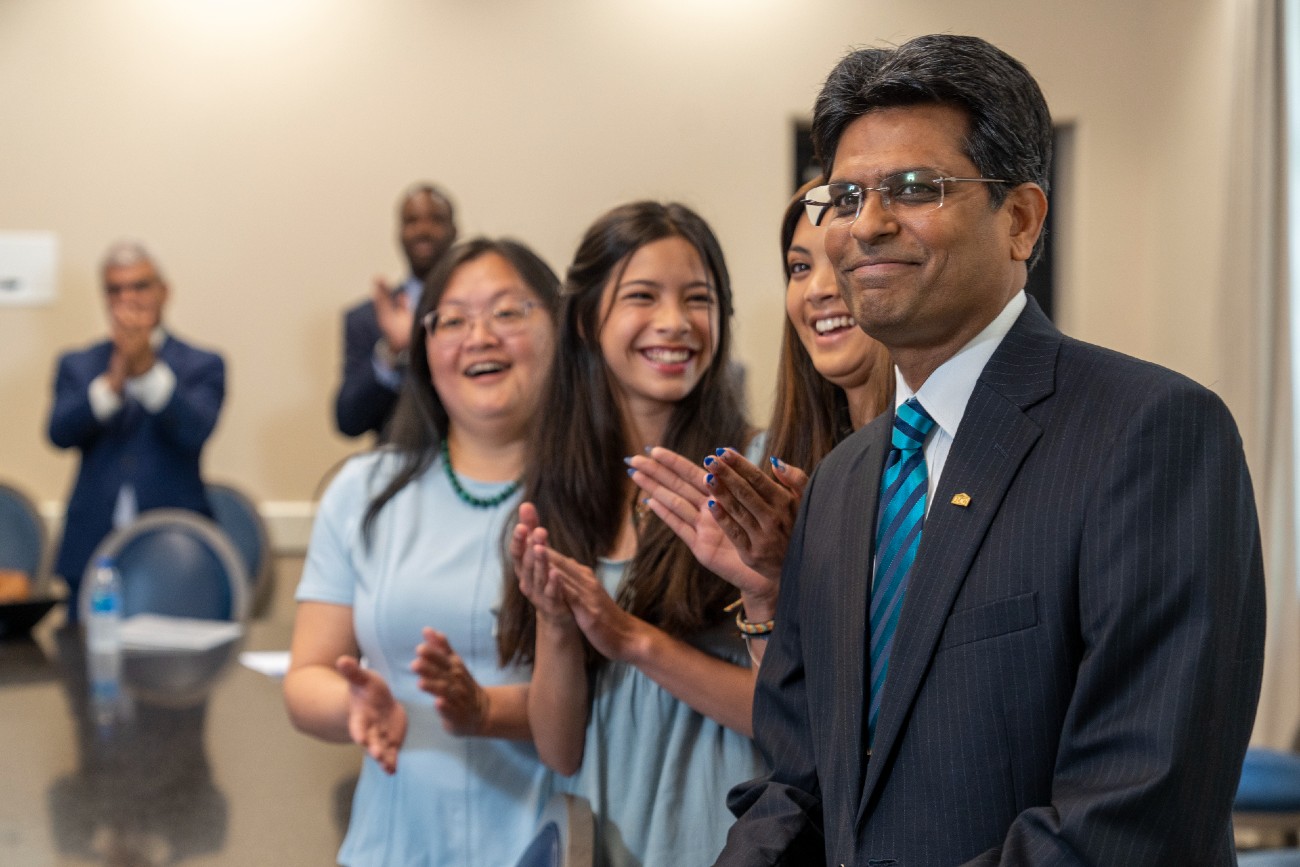 Aswani Volety's selection as UNCW's seventh chancellor came after a rigorous national search, officials said. (Photo courtesy of UNCW)
Community leaders agree that the choice of a new chancellor for University of North Carolina Wilmington affects far more than the health and success of an educational institution. The choice makes ripples far out into the community and region.

That’s one reason the news of Aswani Volety's selection as UNCW’s seventh chancellor was of such interest to community members of all stripes. Volety, provost and vice president for academic affairs at Elon University was, from 2015 to 2019, dean of UNCW’s College of Arts and Sciences and is familiar with southeastern North Carolina and the role that UNCW plays here.

“University towns benefit from the economic impact that comes from welcoming thousands of students each year,” Wilmington Chamber of Commerce President and CEO Natalie English wrote in an email Tuesday. “Future business success is inextricably tied to future talent and the university is one of the critical partners in that work.”

English, who was a member of the 18-person chancellor search committee, said Wilmington is fortunate to have a major public university anchoring the region. “A university presence contributes to a community’s attractiveness for business growth and relocation. UNC Wilmington serves our region in those and many other ways,” she said.

Yousry Sayed, founder, president and CEO of Quality Chemical Labs in Wilmington, knows Volety from his years as arts and sciences dean at UNCW. Sayed, a former chemistry professor at UNCW, worked closely with Volety in creating the graduate program in pharmaceutical chemistry and an endowment for that program.

“He knows UNCW very well; he knows the faculty, staff and administration,” Sayed said of the chancellor-elect. “He made some good connections while he was here. He’s very focused on students and their success. He’s also a good consensus builder: a strong leader who can make difficult decisions.”

Sayed, a member of UNCW’s Board of Trustees who also served on the search committee, emphasized that the process was rigorous.

“It’s public information that UNCW, with the support of the UNC System in Chapel Hill, conducted a thorough national search,” he said. “We got close to 100 applicants, some from much larger institutions and from many different states. Dr. Volety clearly came out on top, which speaks highly of his qualifications and experience. The [search] committee got feedback from so many constituents at the university and in the community.”

Both Sayed and English said that outgoing Chancellor Jose Sartarelli is leaving the university in solid shape and in growth mode.

“As I reflect during this time of transition, I am encouraged that UNC Wilmington will remain a strong contributor to growing our economy,” English said. “Chancellor Jose Sartarelli oversaw significant growth in research, student population and facilities construction that position us well for the future. He accomplished those things while leading our university staff, faculty, and students to develop better resiliency in response to two major hurricanes and a pandemic. Looking forward, I am confident that Chancellor Aswani Volety will build on those successes and will lead the staff and faculty toward continued innovation in developing a future workforce, and in research, that supports growth of our target industry sectors.”

Universities can also have an impact on the social service network and cultural life of the communities where they are located. UNCW has been a good partner, Tommy Taylor, CEO of United Way of the Cape Fear Area, said Tuesday.

“Both the College of Health and Human Services and the Master of Public Administration program have helped us get data and analyze that data to assess needs in the community,” he said. “They have also done research to determine why giving per capita here is lower than in many other communities in the country.”

The university helps area nonprofits develop capacity and capabilities through its Quality Enhancement for Nonprofit Organizations (QENO) initiative, which offers classes and coaching.

“That’s something we partnered together on early on,” Taylor said. “We hope to see a lot more partnership to come.”

Taylor hopes that the new chancellor will continue to support existing efforts as well as champion the State Employees Combined Campaign, an annual workplace giving campaign that allows active and retired employees of North Carolina to donate to charitable organizations in a convenient way.

“We hope he’ll get behind that campaign,” Taylor said.

Interviewed last week by the Business Journal, Volety said his goal is to ensure that faculty, staff and administrators have the resources they need to make things happen.

“They don’t need me to tell them what to do. It’s my job, really, to work with them to create a collective vision, resource them and get out of the way,” he said. “The goal is to align the expertise and the needs together but also learn from the community. We are the ones that are dealing with real-world problems . . . to help the students translate the concepts and principles they’re learning in the classroom to solve the real-world problems.”

Volety acknowledged the university has “fantastic momentum” to build on in determining and serving community needs and equipping students with the skills needed in the region’s changing economy.

Sayed has a strong sense of institutional continuity and is upbeat about the future.

“I’ve been connected with the university since 1976; I’ve been around for five different chancellors, starting with Bill Wagoner,” he said. “Each has had their priorities and each has contributed greatly to where the university is today. In my opinion, Aswani is the right choice for this time. Dr. Sartarelli is leaving the university in a good position to do great things. I am confident that Aswani can do them; I’m very optimistic about the future of UNCW. I think Dr. Volety will build on what the other chancellors have done, especially Dr. Sartarelli.”