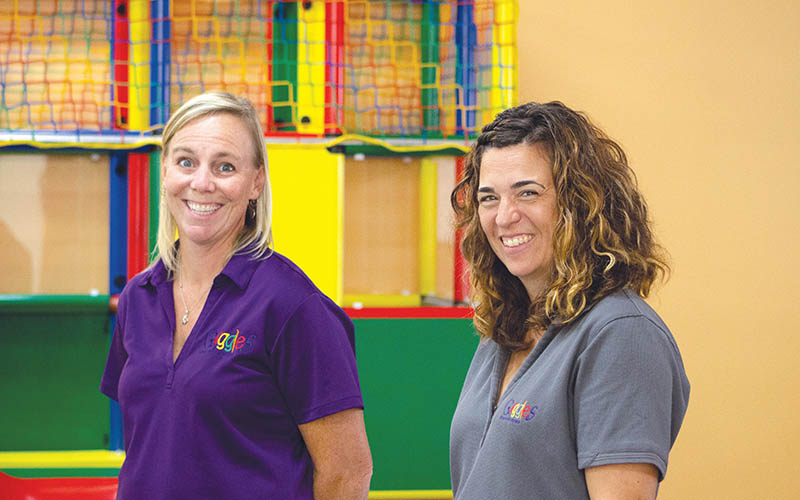 The Richards have taken the concept they developed in 2008 with their first Wilmington location and opened franchises in both North and South Carolina. Currently, they have seven locations and are always cautious when deciding to open a new location.

“These are children, not hamburgers,” Michelle Richards said. “What accounts for our success is we have always held ourselves and our staff to a higher standard.”

That higher standard is expected by each franchise, which begins with the rigorous application process and continues with the center’s design and expectations of the customer experience.

“Our franchises, from an operation standpoint, our centers run very well. We use consistent designs and each location has a custom treehouse. We upfit every single location, demo to the studs and build it back up,” Zach Richards said. “From the front to the back door, each Giggles offers continuity, so customers are able to walk into every Giggles and be treated the same way.”

Because of those higher standards, becoming a Giggles franchisee is more of an exhaustive process than with other businesses, they said. The Richards expect their franchisees to have the dedication and devotion to the children and families that they do.

“It’s hard to be a franchisee. There are certain tests and boxes that need to be checked all the way down to background checks, just to be invited to be a franchisee,” Zach Richards said. “We go through hundreds of applications before we offer a franchise, and I think that is another reason for our success.”

The Richards opened their first Giggles drop-in child-care center in 2008 when they were new parents and were not able to find a center that met their expectations for their child.

“We became aware of the concept of drop-in child care and didn’t find one that we found suitable in our area, or not up to the standards we expected,” Michelle Richards said. “We decided we could do it better. It was a great concept, but we wanted to do it with a higher standard than done before.”

Michelle Richards, who had been a high school science teacher, became the director of their Wilmington location and ran it for four years before the idea struck to begin franchising the business.

“The Wilmington center was my baby. I ran that center as director for a long time, and we were four years in when Zach, who is very entrepreneurial, decided that we could franchise out concept,” Michelle Richards said.

After buying and reading “every book on franchising,” a longtime customer approached them inquiring about owning their own Giggles, and their first franchise was born.

Currently, there are seven Giggles locations in two states: five centers in North Carolina and two in South Carolina. One center did not make it through the pandemic shutdown.

The Richards attribute their ability to keep their Wilmington location open to the economic stimulus and the loyalty of their customers.

“With COVID, it’s been hard. We had to shut down like everyone else; fortunately, we were allowed to reopen in Phase 1,” Michelle Richards said. “It’s been a rough year, scraping through, but we have relied on our niche in the market and the loyalty of our families.”

Part of their “core concept” is that the families they serve are more than just customers, and that connection is what helped to keep Giggles alive during the pandemic, they said.

“Our families are a part of our extended family and they’ve carried us through the pandemic. We have a lot of loyal families who love us. Part of our mission is to care for kids like they are our own,” Michelle Richards said.

Zach Richards emphasized the role the government had in keeping their company afloat, especially using the Paycheck Protection Program (PPP).

“We’ve had a lot of negative talk about the stimulus package, but those PPP loans, with those programs, we were able to save our company. Those programs are working and have been a lifeline financially. We probably would not have been able to stay open without them,” Zach Richards said.

While the pandemic has taught many companies about the necessary sanitation steps to keep customers safe, it reminded the Richards how important the steps they were already taking are.

“The funny thing is, we already had the policies and procedures in place, over and above what any other child care center had done,” Zach Richards said. “Except for masks, all the sanitation, washing, handwashing and sanitizing were already in place.”

One lesson that the Richards have taken away from the pandemic is something they already knew: “Our staff is worth their weight in gold. They are just so amazing, and we are so grateful for them that they stuck through this with us,” Michelle Richards said.