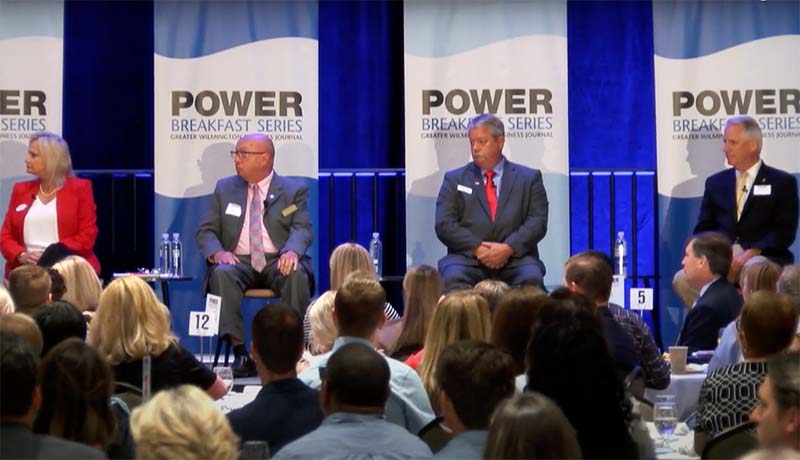 New Hanover County Board of Commissioner candidates participate in a forum at the Greater Wilmington Business Journal's Power Breakfast Thursday morning. (Screenshot from the GWBJ's YouTube recording)
Candidates for the New Hanover County Board of Commissioners participated in a forum hosted by the Greater Wilmington Business Journal at its Power Breakfast Thursday morning.

North Carolina House of Representatives and Senate candidates also spoke in a separate discussion during the event.

Two seats are open for the county board. Commissioner Rob Zapple is running for re-election, and Chairwoman Julia Olson-Boseman, who lost her bid for re-election in the spring primary, will see her term end in December.

During a time-moderated forum, candidates briefly introduced themselves before diving into the issues.

First discussed was what many consider residents’ No. 1 concern: growth and development. Toby, a longtime firefighter and EMT who owns a towing company in Wilmington, said it was important to preserve the remaining commercial and industrial zoning. “If we do away with our commercial and industrial – which we have precious little of left in New Hanover County – that doesn’t leave us a whole lot of room for business and development growth.”

Zapple spoke to the need to increase density in appropriate areas while being mindful to not shoehorn these projects into existing neighborhoods. Pierce, small-business owner and former Carolina Beach councilwoman and mayor, said officials must focus on infrastructure to address the region’s housing shortage. “If you don’t grow, you die,” she said.

On the topic of affordable housing, Zapple highlighted actions the county has taken over the past year. Recent county investments include attributing funding to the issue for the first time with $15 million for a five-year period and pitching in to assist the private affordable housing development Starway Village. “We’re on the path,” Zapple said. “We’ve got a lot more work to [do].”

Pierce said the region needs to bring in higher-paying jobs to help residents afford to live in the area.

As for economic development, Zapple touted the county’s recent partnership with Cape Fear Public Utility Authority; in that agreement, the county will fund an estimated $23.5 million utility project to bring water and sewer to areas of northern New Hanover County.

“That’s the way to do it,” he said. “That’s the path to our future with those kinds of partnerships.”

Robinson, who spent nearly 30 years working for the New Hanover County Sheriff’s Office, said there should be a greater emphasis on vocational programs and apprenticeships that enhance trades.

Incentives should be considered on a case-by-case basis, Toby said, and analyzed based on their cost-benefit to residents. Toby referenced the fallout from the state’s sunsetted film tax credit program in 2014 and the wide-ranging impact just one production can have on local small businesses. “It was devastating to this area,” he said.

Besides creating a $1.2-billion endowment, the 2021 sale of the county-owned New Hanover Regional Medical Center to Novant Health also provided the county with a $300 million revenue stabilization fund and $50 million fund for mental and behavioral health. Unlike the endowment funds, which are overseen by a separate entity, commissioners have latitude with how the $350 million gets spent.

Zapple said he wants to see that money “back on the street” as soon as possible, while still being careful to ensure the chosen investments make a generational impact.

Given the area's transportation funding issues, Robinson said he could see the funds being attributed to area traffic issues, including a replacement for the Cape Fear Memorial Bridge, a currently unfunded project.

Pierce said she could see the funds being spent to expand Cape Fear Community College’s nursing program to address the nursing shortage adversely affecting the health care system. “I don’t like to spend money unless we have to,” she said. “It’s very important that we are conservative with that money and not just spend it because it’s there.”

Asked for one thing the candidates would like to accomplish if elected, Toby said he’d like to see accountability codified for sitting commissioners. “It’s kind of crazy that we can impeach a sitting president but we cannot remove a local official that is not performing or is behaving badly,” he said.