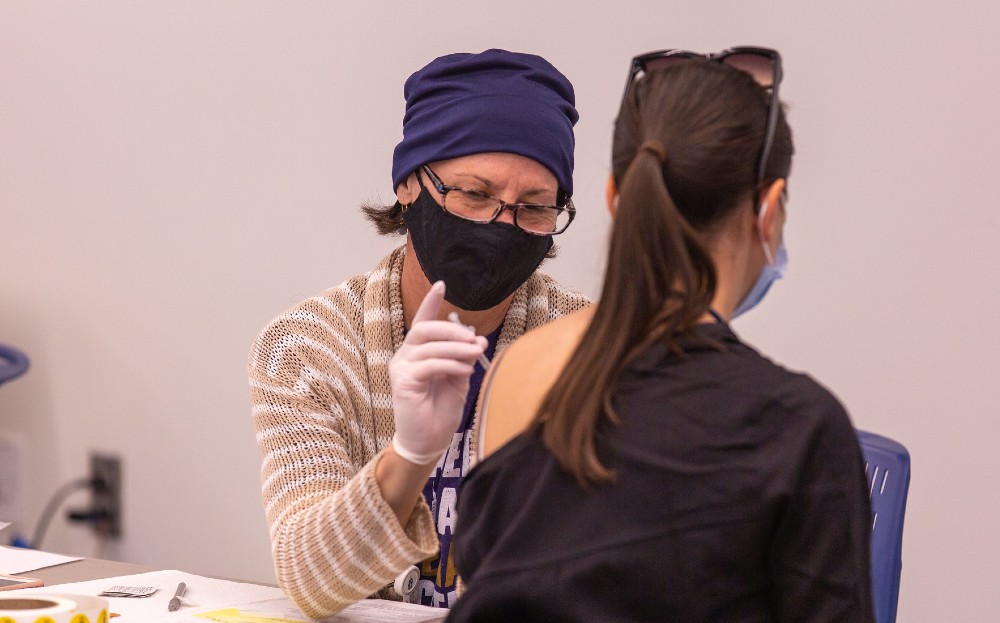 A New Hanover County employee receives a COVID-19 vaccine last month. The health department said it would not be immediately affected by a nationwide pause in the use of the Johnson & Johnson vaccine. (Photo courtesy of New Hanover County)

The nation’s massive vaccination effort hit a snag Tuesday when, citing safety concerns, two federal health agencies called for a pause in the use of the Johnson & Johnson COVID-19 vaccine.

Officials at the CDC and FDA are reviewing six cases in which a rare and severe type of blood clot developed after the person received the J&J vaccine, which, unlike the Pfizer and Moderna vaccines, requires only one dose.

In North Carolina, the state’s top health agency said it was heeding the federal recommendations.

“Out of an abundance of caution, we are following the recommendations of the FDA and CDC and have paused the administration of the Johnson & Johnson COVID-19 vaccine until we learn more,” according to a statement released late Tuesday morning by the N.C. Department of Health and Human Services.

Officials with New Hanover County Public Health, Brunswick County Health Services and UNCW said they were following the guidance from the NCDHHS and had suspended administering the J&J vaccine, which was deployed March 1, three months after the Pfizer and Moderna vaccines.

The vaccination clinics currently planned by New Hanover Public Health are using the Pfizer and Moderna vaccines, so no clinics will be affected, a spokesperson said. UNCW began offering vaccines March 25, and has administered about 2,500 doses, all Johnson & Johnson. Neither the Pfizer or Moderna vaccines are currently available at the university.

“Anyone scheduled to receive J&J will be offered Pfizer or Moderna or rescheduled, depending on availability and patient preference,” a Novant spokesperson said Tuesday.

CVS and Walgreens, the nation’s largest retail pharmacies, immediately stopped giving the J&J vaccination and were contacting customers if appointments needed to be canceled.

As of April 12, more than 6.8 million doses of the Johnson & Johnson (Janssen) vaccine have been administered in the U.S. The CDC and FDA said they are reviewing data involving six cases of a rare and severe type of blood clot in individuals that developed after they received the one-dose vaccine.

In a joint statement, the two federal agencies said the six cases occurred among women between the ages of 18 and 48, and symptoms occurred six to 13 days after vaccination.

People who received the J&J vaccine and develop a severe headache, abdominal pain, leg pain or shortness of breath within three weeks should contact their health care provider, officials said.

As of Monday, there have been 936,425 positive cases of COVID-19 in North Carolina and 12,305 people have died statewide from the respiratory disease that is caused by a type of coronavirus. Locally, 161 residents of New Hanover County have died from the disease; 147 in Brunswick; and 69 in Pender.