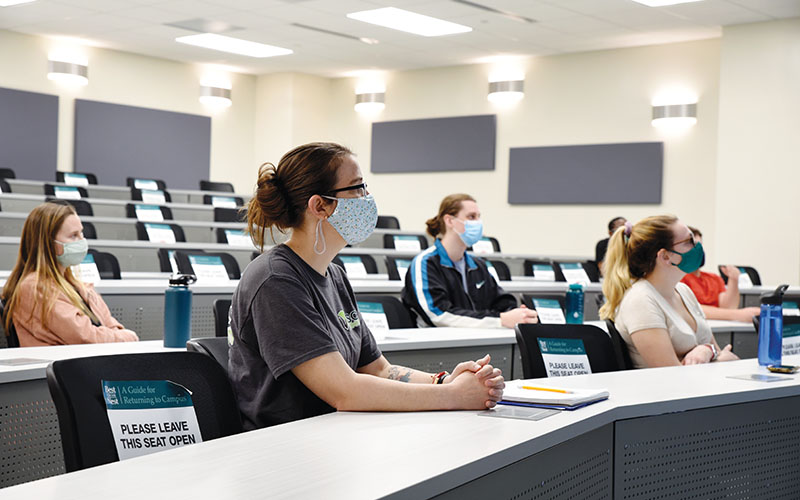 Wearing a mask, Jacquelin Meade listens to presentations from fellow students in her organic chemistry senior seminar class taught by Wendy Strangman, assistant professor of chemistry and biochemistry at UNCW. (Photo by Michael Cline Spencer)
In addition to anything else that it has wrought, a year of COVID-19 has forced officials, business owners and just about everyone else to use their greatest creative powers and to remain flexible.

In some cases, pandemic restrictions have spurred innovation. In other cases, entities are simply hoping that, as the virus becomes less of a threat, they can return to pre-COVID operations. But no one knows when that will be.

For example, the city of Wilmington’s community services director said Greenfield Lake Amphitheater, shut down since last March, should be up and running again in a few months. In October, City Council awarded entertainment purveyor Live Nation a contract to manage the venue.

“As of now, Live Nation is planning concerts at normal capacity at both the Hugh Morton Amphitheater at Greenfield and North Waterfront Park beginning this summer,” Amy Beatty said. “Of course that is subject to change depending upon COVID conditions.”

Live Nation representative DJ Lindfors was a bit more cautious in his assessment.

“We’re certainly looking forward to the return of live music to the Greenfield Lake Amphitheater” and North Waterfront Park, he said. “Obviously, our plans are fluid as they relate to evolving COVID developments. We are closely monitoring local regulations and when they allow for it, we’ll return to normal capacity.”

Like the amphitheater, performance venues elsewhere stood vacant, with months of booked programming scuttled, while the area’s smaller special events spaces faced cancellations of weddings and other gatherings. The larger venues’ ability to open with limited capacity – even with recent easing on the numbers – doesn’t cover costs, say operators.

It’s not just entertainment venues that are second-guessing. Public educational institutions have had to make a series of adjustments over the past 12 months. Both higher education campuses and K-12 classrooms have shifted their learning models, including developing several hybrid arrangements. Last month, the New Hanover County School board voted to let youngsters in kindergarten through fifth grade return to fulltime, in-person learning March 8, with students in grades 6 through 12 continuing a combination on-site and remote model. Families can continue to opt for an all-virtual experience if they prefer.

UNCW, which has seen success with its current hybrid model supported by vigorous testing, tracing, mask-wearing and distance-keeping on campus, decided to forego in-person commencement exercises in May in favor of a safer virtual ceremony. Nevertheless, Chancellor Jose Sartarelli is optimistic about the nearterm future.

“I know many of you want to know what the summer sessions and fall semester will be like,” he stated in a message to the campus community last month. “We are planning for a ‘normal’ summer at this time, recognizing that UNCW typically offers quite a bit of online academic programming in the summer. We also are planning for a more ‘normal’ fall to include more sections of in-person and hybrid classes; more students living on campus; more in-person sports, events and activities; more online and hybrid camps, as well as a possible return to in-person youth programs; and, well, just more Seahawk fun.”

Big events were nonstarters. Organizers canceled the N.C. Azalea Festival and a similar fate befell Riverfest 2020 and the Orange Street ArtsFest. Instead, several organizations, including the Wilson Center and Cucalorus, looked to the past for inspiration and launched a drivein movie series. Curbside Cinema, the partnership between Cucalorus, UNCW and WHQR Public Media, took a break for the winter months and will return to the outdoor screen at UNCW’s Kenan Auditorium parking lot this month.

Speaking of film, COVID may be partly responsible for the surge in film activity that has EUE/Screen Gems Studios filled to capacity and other projects taking a serious look at the Wilmington area, said Wilmington Mayor Bill Saffo. With people at home, and theaters closed or severely restricted in capacity, the demand for streamed content has exploded, he noted.

“A lot of production companies are producing a tremendous volume of content, and we have [a well-established] industry here,” Saffo said.

While the streaming segment was already growing month by month and studios realize this platform is tremendously important, COVID has sped up the demand for at-home viewing, said Wilmington Film Commission Director Johnny Griffin. Once the film industry established COVID protocols that would allow shooting to resume, the phone started ringing in Griffin’s office and at EUE/Screen Gems.

“Every studio has its own streaming service now, not to replace movie theaters but as an additional way to distribute and view content. All of them are rushing to make content,” Griffin said. “Wilmington is on a roll, which produces good news. When high-level [film] people are here [as part of a project], they’re already working on future projects, so they are getting a test-drive of Wilmington. Work breeds work.”

Several industries objected to what they viewed as inconsistent restrictions from N.C. Gov. Roy Cooper; one business association took him to court. The Bowling Proprietors of the Carolinas and Georgia sued Cooper in June, claiming that his pandemic-related restrictions unfairly kept bowling alleys closed while allowing some businesses with similar levels of risk – restaurants, barber shops, salons, tattoo parlors – to operate under strict social distancing and cleaning guidelines.

“We were closed from March 28 until July 7,” said D.C. Knight, general manager of Carolina Lanes Beach Bowl, noting his facility reopened on the latter date when Special Superior Court Judge James Gale ruled in favor of the Bowling Proprietors Association.

Bowling lanes stayed open a week: Cooper appealed the decision to the N.C. Supreme Court, which blocked Gale’s ruling and forced bowling alleys to close down again. Knight said his facility chose to ignore the ruling and to remain open, employing strict sanitizing and distancing measures and requiring customers and staff to wear masks. Those measures continue to be enforced, he added, and bowlers have started to come back, especially during the winter weather.

While restaurants may have chafed under the COVID restrictions, some successfully adapted to offering takeout and delivery services prior to a May easing that allowed them to operate indoors at 50% capacity. Some found ways to serve outdoors. Some thrived: Takeout-only Topsail Steamers reported increased sales because its carryout food is well suited for casual outdoor gatherings. Food trucks were in high demand.

Other restaurants succumbed to the economics of COVID and closed, some permanently. The past year’s casualties include Wilmington’s Tama Café and South College Sandwich & Deli.

Bars, meanwhile, have been under more severe restrictions. Forbidden to provide indoor service and required to stop serving alcohol at 9 p.m., some bars closed for the duration, while some served outdoors or took their spirits on tour via mobile units. Effective Feb. 26, Cooper’s office allowed bars to resume indoor service with limited capacity (30%), and to extend serving hours until 11 p.m.

“They’re up dramatically, which creates additional revenues to the city and county, helping to offset the costs of providing [public] services,” he said.

And it’s not just locals who are drinking. The area’s beaches saw a healthy tourist season once the state allowed hotels to reopen and vacation home rentals to resume.

“Tourism has been disjointed, but not at our beaches,” Saffo said. “[The beaches] had a phenomenal year. Looking at our [room occupancy tax receipts], it was a remarkable year. But we lost business at the convention center, which supports hotels downtown. I think it will come back.”

“The county assisted 130 small businesses (82 of which are minority and women-owned businesses) with $10,000 grants, for a total of $1.3 million in local business support,” County Manager Chris Coudriet said in a December report. “An additional $1.3 million was provided for housing assistance and childcare assistance for local families – all through CARES Act funding.”