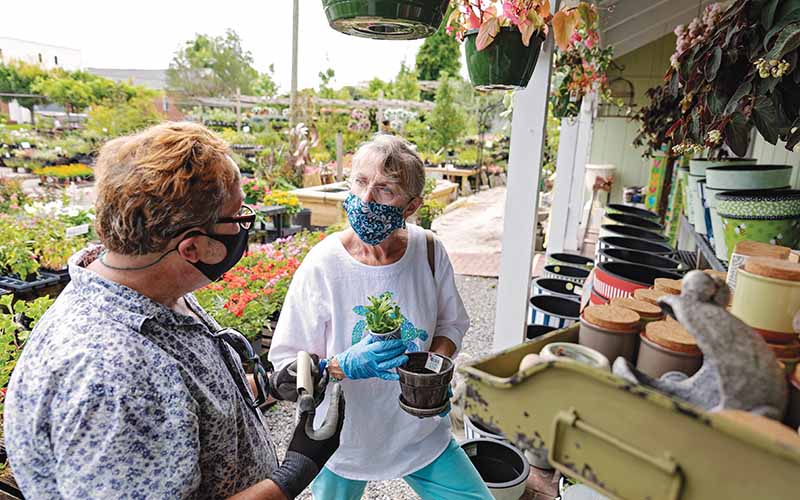 The Transplanted Garden in downtown Wilmington, for example, had been requiring customers to wear both masks and gloves ever since the nursery reopened in mid- April.

“We shut down for two weeks at the end of March because I wanted to know how bad and how fast this thing was going to get,” co-owner Tom Ericson said of the novel coronavirus. “Then things seemed to level out, and I emailed my doctor, asking, ‘If we say staff and customers have to wear masks and gloves, would that be okay?’ He said, ‘You should be fine.’”

Ericson’s desire for a gloves rule resulted from his concern about how long the virus reportedly can live on plastic surfaces. So when the Transplanted Garden reopened, it required customers to wear both masks and gloves, and to make shopping appointments. But that proved unwieldy.

“April’s numbers were dismal, and I was spending too much time setting appointments and emailing customers,” he said. “So we gave up on that and just started limiting the number of people on the property at any one time to between 15 and 20.”

The “no mask, no gloves, no service” policy continued until recently and was largely well received, according to Ericson. His sales in May were nearly normal for that month. In June, he compiled the many positive and thankful messages he had received from customers and shared the feedback with his staff of seven.

Not that there haven’t been complaints. There was a woman who didn’t bring gloves and was asked to leave. She kicked over some plastic plant trays on her way out.

“Most of our customers are thanking us for what we’re doing,” Ericson said.

Earlier this month, however, Ericson decided to rescind the gloves requirement at the request of his staff.

“They are really getting harassed by customers,” Ericson said in an email July 9. “So, as of tomorrow, we will no longer be requiring gloves.”

When the governor’s mask mandate went into effect June 26, Peggy Mahan didn’t know quite what to expect. Mahan, owner of paper goods store Occasions … Just Write in downtown Wilmington, posted a notice on the door of her Cotton Exchange establishment and stocked up on disposable paper masks.

“I have not had any issues,” she reported. “One woman came in without mask. I offered her a mask, but she was not inclined to wear one, so she left.”

There is a sign on the door of Soif de Vin, a wine merchant in Monkey Junction, that says masks are required.

“Most people have been pretty reasonable,” said Shawn Underwood, husband of owner Amy Siler. “The majority of people have come in with their own mask. If they don’t, we have a stack by the front door and give them one. I think a lot of people are already used to the concept. A lot were already wearing one before the governor mandated masks. We wish he had mandated them earlier but are glad he finally did. We have not had any fights.”

Siler corrected him: “I did have one fight, when a woman called and said, ‘Such-and-such wine bar is open, why aren’t you?’”

Although Soif de Vin is a wine bar, it is not pouring wine for consumption on the premises, Siler said, explaining that her business is selling sealed bottles only, and its wine tastings are done via Zoom. The store provides walk-in, curbside and delivery services only, “until the [COVID] numbers change,” Siler added.

When the New Hanover County Health Department offered a COVID-19 online informational course, Siler took it and then passed a test that certified her as knowledgeable about the pandemic-related regulations and committed to following them. Her certificate is affixed to the front door at Soif de Vin.

When phase two of North Carolina’s reopening process allowed Capelli Salon in Leland to serve clients again, it – like salons everywhere in the state – had very specific requirements to follow in addition to a mask requirement for all employees and customers.

“The regulations allow you to have 12 people for every 1,000 square feet of space,” said co-owner Denise Brugnone. “We are allowed to have as many as 24, but we keep it to about 20, which is one client per stylist and two people up front.”

Before entering the shop, clients have their temperature taken and logged. Brugnone said that precaution is not required by the state, but she believes it improves safety. Her staff schedule appointments to allow time for sanitizing surfaces between clients. And there’s a large hand sanitizer station as people come in the door.

“You wouldn’t believe how many people just walk around it,” she said with a laugh. “We have to ask them to go back and sanitize.”

Mask-wearing has posed one challenge for Capelli Salon stylists.

“We’re visual people; we want to look at the client’s face, the shape, the eye color, because we take all of that into consideration when we style, especially if it’s a new look for them,” Brugnone said. “The mask hides part of that. But now it’s like second nature for us.”

In general, clients have been “very compliant and happy,” according to Brugnone. “Only one gentleman refused to wear a mask and I refused to let him in.”