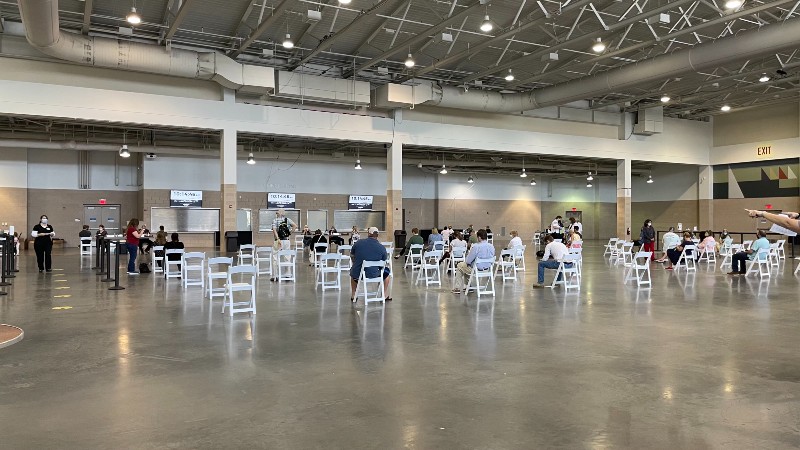 With large gatherings on hold because of the pandemic, it’s been a quieter-than-usual year at the Wilmington Convention Center.

That wasn’t the case Friday, however, as Wilmington Health administered the first doses of the Pfizer vaccine to nearly 1,200 people at the city-owned center, which sits along the northern downtown riverfront.

Anyone 16 and older is now eligible to get a vaccine in North Carolina.

Wilmington Health has been offering the vaccine since it first became available, but space at its main campus limited how many people could be vaccinated in a day.

Wilmington Health teamed with the city and the Convention Center manager ASM Global for the mass-vaccination event. The center will be a vaccine site again April 30 for those who were vaccinated Friday to receive the second dose. (The Pfizer and Moderna vaccines currently require two doses; the newer Johnson & Johnson vaccine requires only one.)

With more space available, Wilmington Health was able to administer its most-recent vaccine allocation in one day, compared with the three days it’s been taking at its facility at 1202 Medical Center Drive, according to Wilmington Health spokeswoman Alexis Hunter.

“At 1202, we have anywhere from four to six injectors – the people that are literally giving the shots – but here today we have 10 injectors,” Hunter said. “So we're really able to push through more volume here just because of the wonderful space.”

Hunter said Wilmington Health will continue to work with the Convention Center and other large venues to secure vaccinations sites as space is available.

The Convention Center isn’t the only large, nonmedical site to be used for vaccinations. New Hanover Regional Medical Center has been offering vaccines at Stone Theatres' The Pointe 14 movie theater at South 17th Street and Independence Boulevard.

But in another sign that life is getting a little more back to normal, the theater complex is gearing up for an April 23 reopening, meaning this will be the last weekend for vaccinations at the site.

“NHRMC remains committed to providing COVID-19 vaccines to our community,” spokesman Julian March said Friday. “We will continue to offer vaccination appointments at our 17th Street campus. As part of our targeted outreach efforts, we are also partnering with third-party organizations to offer multiple vaccine outreach clinic sites each week at locations throughout the community.”

March said appointment information is available on the hospital's website.

As with all providers offering vaccinations in the area, websites are the best place to start. Vaccines are currently being offered by the following. Locations and times vary, as does the particular vaccine being offered:

One Year Later, Is The Worst Over?