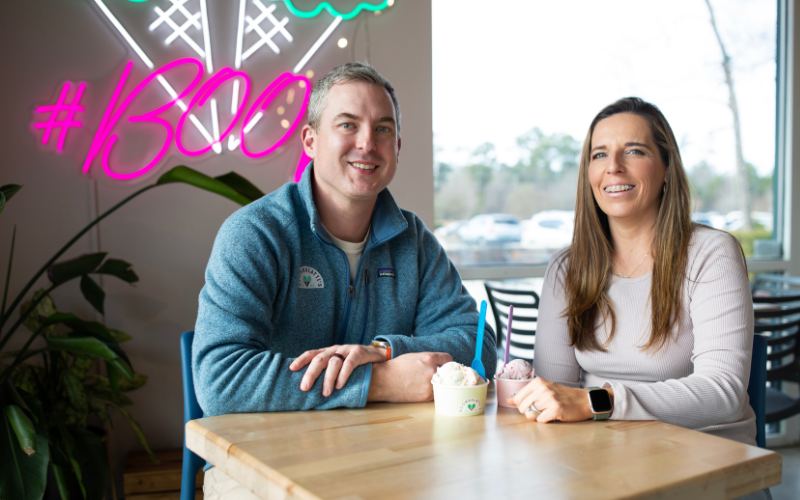 Wes and Kristen Bechtel, owners of Boombalatti’s Homemade Ice Cream, are shown at their shop in The Forum in Wilmington. (Photo by Madeline Gray)

Boombalatti’s Homemade Ice Cream became a local favorite when it first opened in The Forum on Military Cutoff Road in 1999. When Wes and Kristen Bechtel decided to take the reins in 2015, they kept the name but decided to make it more of an experience.

“We saw immediate growth right off the bat,” Wes Bechtel said. “We honed in on our customer service and hired the nicest people we could get.”

Their focus on customer service centered around the experience of the customer. From the colors on the walls to the music playing in the background, they wanted customers to feel welcome and happy as they peruse the 20-plus flavors made in-house.

“We wanted people to walk in and say, ‘What happened?’ and know something was different,” Kristen Bechtel said.

The Bechtels revamped the logo, repainted the store and changed its overall vibe.

“I am a bit of a perfectionist. Not only do I want to provide the best ice cream you can eat, but the best staff, and I want everything from the colors of the shops, the interior design, the merchandise, the music, all of that, so that when you open the doors, you know it is going to be a fantastic experience,” Wes Bechtel said.

That vision led to their immediate success and the opportunity to open their second location just two years later in the Brooklyn Arts District in downtown Wilmington.

“It was still the beginnings of the Brooklyn Arts District. We knew it would be a slow burn, but we wanted to be a part of making the neighborhood more family-friendly,” Wes Bechtel said. “We had different expectations for the downtown shop, but it has grown faster than we expected.”

The Bechtels credit their growth to the success of other local businesses in the revitalized area including Palate Bottle Shop and Garden, Angus Grill, three10, Edward Teach Brewery, as well as the development of the Live Oak Bank Pavilion.

“What we hoped would happen down there has,” Wes Bechtel said. “There’s a lot of really good energy.”

They also credit their success to the team of women who run their shops, including the newest shop in Hampstead, which they discovered was a viable option during the COVID-19 pandemic.

“2020 was nuts, so we turned into a delivery company at first, and there was so much Hampstead traffic all the way up to Sneads Ferry,” Wes Bechtel said. “During the COVID days, we realized that if we opened a shop up that way, Hampstead would support us,” Kristen Bechtel added.

On Black Friday in 2021, “still amid COVID,” as Wes Bechtel said, Boombalatti’s expanded to Hampstead, the Bechtels’ third location.

“It caught on pretty quickly, more quickly than anticipated,” he said.

The adventure that brought the couple success started in Erie, Pennsylvania, where their relationship began, but Kristen Bechtel said she knew she didn’t want to live there forever. They picked Wilmington off a map, moved to the Port City and started their new lives together.

Both Wes and Kristen Bechtel had desk jobs they did not like, but Wes’ love of ice cream nudged him to make a go of it.

“Ice cream has always been my favorite food,” he said.  “I used to make it for friends in college.”

He also developed an ice cream business plan as part of his MBA studies, so the venture seemed a natural fit.

“The initial plan was to sell at farmers markets, but when we found out Boombalatti’s was for sale, we went all in,” he said.

“It was just Wes and I when we started at Boombalatti’s, and we ended up hiring our babysitter because we needed the extra help,” Kristen Bechtel said.

Five of their full-time employees started as hourly scoopers. Today, the couple has nearly 40 employees among their three shops.

Recently, Boombalatti’s enlarged its footprint in its flagship store in The Forum by expanding into the former Tama Tea space next door. The expanded space allowed the couple to open a roomier shop with production and merchandising taking over the previous storefront space.

The couple has two daughters, 13-year-old Airlie and 11-year-old Stella, who often provide their parents with business advice as well as ice cream flavor development feedback.

“We were at the farmers market, and Airlie wanted to buy a bunch of watermelons. I didn’t understand why we needed a bunch of them, but she said she wanted to try to make watermelon sorbet, so we did, and it was a hit,” Kristen Bechtel said.

To take their knowledge of ice cream to the next level, in January 2022, the couple completed Penn State’s Ice Cream Short Course, “the oldest, best-known, and largest educational program dealing with the science and technology of ice cream,” according to the university’s website.  “We are always looking to perfect the process and come up with new, wild ideas,” Wes Bechtel said.

Boombalatti’s ships nationwide, so visitors who fall in love with their favorite flavors do not have to wait until another trip to Wilmington to get their ice cream fix.

As far as a fourth shop is concerned, the Bechtels are not counting it out, but they want to make sure they are ready to give it their all before they dive into another business.

“We don’t want to spread ourselves too thin, but ice cream is not a trend,” Kristen Bechtel said. “Homemade ice cream with real ingredients is nostalgic, it’s been around forever, and it’s not going anywhere."