Banks Aim To Cash In With New Names 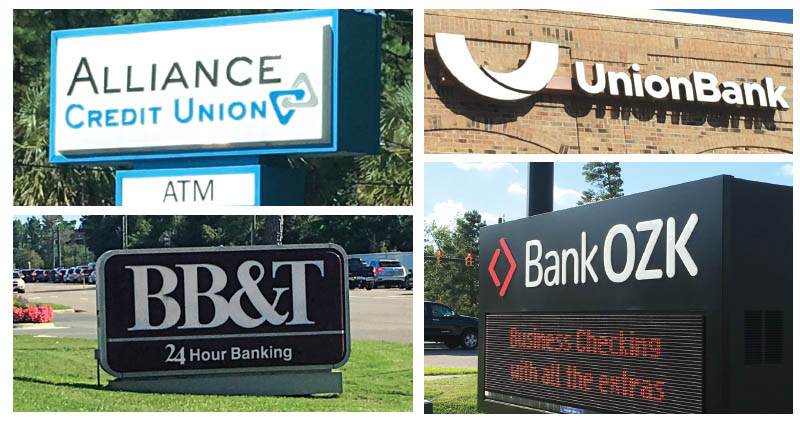 Name changes have happened or are in the works at four banks in the Wilmington market. (Photos by Jenny Callison)
Companies often invest heavily in establishing a brand and building it. Why, then, do some change the name and the look that has distinguished them? In the local market, at least four financial institutions with a presence here have done just that in the past couple of years.

“Alliance Credit Union has been around for more than 65 years,” said Richard DeCrescente, the credit union’s regional vice president for sales in the Wilmington market. “The last couple of years we’ve pursued a growth strategy in both our markets – Wilmington and San Jose [California]. One thing we ran up against is that more than 10 credit unions nationally were sharing the same name. It created confusion, especially when people were entering the credit union online or through an app.”

That confusion could be costly: DeCrescente said that Alliance would get loan applications and even wire money transfers that should have gone to another similarly named credit union.

The new name, rolled out in April this year, has met with a positive response, DeCrescente said, adding that he’s had just a handful of people ask the reason for Alliance’s name change.

As to the name choice itself, De- Crescente said, “It has energy behind it, the energy of what it means to be part of a credit union. We’re also rebranding the credit union. Our new tagline is ‘Step up to better,’ which means better rates, a better experience, better opportunities or a better financial situation for your family. We’ll be rolling out the new brand in the next couple of months.”

The rebranding, according to DeCrescente, is more than just putting up new signage. “It’s the look and feel of our branches, our online channels, telephone channels,” he said, adding that ultimately, however, the success of rebranding lies with employees.

“Our employees are out brand,” he said. “We are beginning employee orientation about how we communicate what our mission is, what our purpose is.”

The little bank, with one loan production office in Wilmington, took the Union Bank name when it was merged with the latter a couple of years ago. Market Executive Jon Joyner echoed DeCrescente’s belief about the essence of a bank’s brand.

“Our ‘brand’ is built by employees developing personal relationships with clients as opposed to general marketing and promotion,” he wrote in an email. “We focus our efforts on business owners and entrepreneurs. Our clients appreciate that we understand business, finance and accounting. Our ability to deliver service and solutions for clients has built our ‘brand’ over the years.”

It's been about a year since Bank of the Ozarks changed its name to Bank OZK. Reception to the streamlined name has been good, said Cathy Williams, manager of the bank’s Wilmington branch. The new name, taken from the bank’s ticker symbol, was designed to help the bank spread geographically.

“It doesn’t come across as regional,” Williams said of the new moniker. “The question we have been asked most frequently is: ‘How do you pronounce that?’ If nothing else, it gets the conversation started.

Another high-profile name change is in the offing, as BB&T (Branch Bank & Trust) and SunTrust banks prepare for what they term their “merger of equals.” To carry out that concept, a new name was required. In June, officials from both banks announced that the new name would be Truist.