Despite Other Options, Bank Chooses To Branch Out In Wilmington 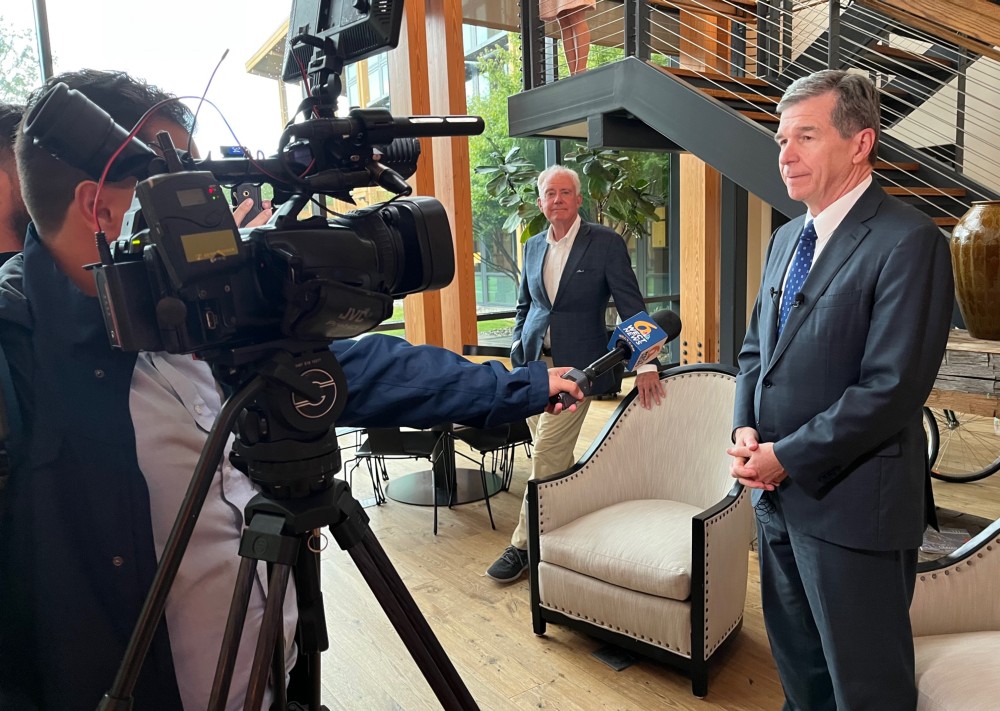 Gov. Roy Cooper answers questions at Live Oak Bank in Wilmington after announcing the bank will receive a state grant for creating jobs and expanding. (Photo by Cece Nunn)

Wilmington-headquartered Live Oak Bank could have grown somewhere else, even somewhere outside North Carolina.

And bank officials anticipate that Live Oak's reach will do just that.

“We have 30 lenders in other towns throughout the United States. And we have an office in Dallas; we have an office in Santa Rosa. We have a presence in Atlanta and Charlotte, and then we're on the N.C. State campus in Raleigh,” said Live Oak Chairman and CEO James “Chip” Mahan III.

The bank has more than 900 employees, nearly 700 in Wilmington, and "we will continue to expand. We will have lending officers in 100 top cities in the United States.”

But even with opportunities in other markets, the route Live Oak officials chose for its immediate future includes expanding its workforce and physical presence in Wilmington, on a 100-acre campus long-envisioned to include multiple structures and amenities.

Gov. Roy Cooper announced Wednesday that Live Oak Bank is receiving an N.C. Job Development Investment Grant (JDIG) because the bank plans to add 204 jobs over the next five years and invest $25 million in expanding its midtown Wilmington campus. Construction on the fourth building at Live Oak Bank headquarters on Tiburon Drive is expected to start this year.

The state money follows incentives already granted of up to $300,000 from New Hanover County and $200,000 from the city of Wilmington (under the code name “Project Buckeye”) to support the expansion and hiring.

“Every little bit helps. We'll break ground on that building in December, and there will be about 320 folks in that building in January of 2024. We'll spend at least $30 million on that building … because we think collaboration means something. So you're here on our campus and you see our young kids – the average age here is about 32,” Mahan said Wednesday. “They want to come to work. They want to know what's best for the 28 million small businesses in this country that create 66% of the new jobs.”

That outlook has helped Live Oak grow, he said, "because frankly, the biggest banks in the land don't take care of small businesses very well or we would not be as successful as we've been.”

Asked whether incentives are used to keep companies from leaving the state, Cooper, who spoke to the media briefly after Wednesday’s announcement at Live Oak Bank’s main building, said, “I think it's important to note that when we attract new businesses here, it doesn't end with the ribbon. We look at North Carolina as being a partner with our businesses because we know that the better-paying jobs that we can create here, the better off all of us will be.”

He said Live Oak Bank officials know “North Carolina has been a partner; they're already here. But still, this is the kind of company that can go anywhere it wants, it can pull up roots, it can expand in other areas of the country if it wants to, particularly with the way technology can be connected. So the fact that they've had such a good experience in North Carolina and particularly in Wilmington, makes them believe that they're better off just expanding right here.”