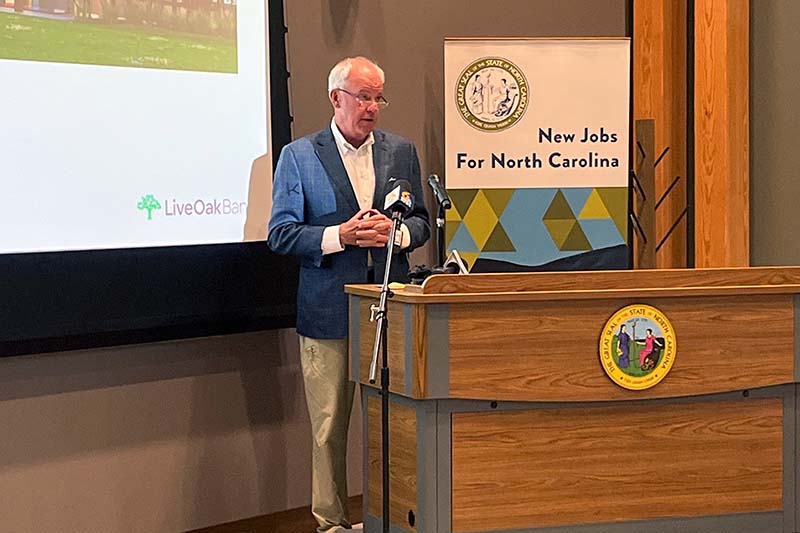 Live Oak Bank Chairman and CEO James “Chip” Mahan III addresses the audience at the announcement of the bank's expansion in Wilmington. (Photo by Cece Nunn)
In one of the biggest economic development announcements for the Wilmington area in recent years, Live Oak Bank officials said Wednesday they plan to add 204 jobs over the next five years and invest $25 million in expanding their midtown Wilmington campus, an effort acknowledged by local and state incentives.

"Over the next 12 years, that will mean a boost to North Carolina's economy of $1.1 billion," Cooper said of Live Oak's hiring and expansion plans.

He said the bank is receiving an N.C. Job Development Investment Grant (JDIG) of more than $1.5 million. That’s in addition to incentives already granted of $300,000 from New Hanover County and $200,000 from the city of Wilmington (under the code name “Project Buckeye”) to support the expansion and hiring.

All of the grants are expected to be received over five to 12 years.

“Live Oak intends to hire employees with an average salary of more than $101,000,” a news release stated. “Newly created positions will include analysts, underwriters, lending staff, technology managers, information security professionals and other personnel. This creates more than $20 million in annual payroll impact for the region.”

The online-only bank, which built its foundation on SBA loans to niche industries, currently has more than 900 employees, 694 of those in Wilmington.

“Live Oak Bank is proud to call Wilmington home. With more than 900 employees working toward our mission to be America’s small business bank, we are grateful for the support of local, county and state officials for powerful capital investments that will help grow fintech jobs in our community and bring hundreds of dedicated Live Oakers to our campus,” said Live Oak Chairman and CEO James “Chip” Mahan III in the release.

Crews are expected to break ground later this year on the fourth building at Live Oak’s campus.

Live Oak selected LS3P architects to design the building, along with builders Monteith Construction Corp. and Swinerton as the commercial construction companies, according to the release.

In another expansion of its footprint, Live Oak Bank bought the former Verizon call center office building, a 160,000-square-foot structure, next to its campus for $18.3 million in February, according to property tax records.

On Tuesday, the investment arm of Live Oak Bancshares, Live Oak Ventures, announced it has exited its investment in Payrailz, a digital payments platform, recently acquired by Jack Henry & Associates Inc. (Jack Henry). According to a news release, Live Oak officials anticipate an estimated pre-tax gain of about $28 million, subject to final adjustments.

“This is the third investment by Live Oak that has had a greater than 9x return. We are proud of the success we are seeing in our investment strategy – partnering with industry veterans to address challenges in banking, and particularly in small business banking,” said Stephanie Mann, Live Oak’s chief strategy officer, in the release. “Fran Duggan and Paul Franko, Payrailz founders, have modernized payment solutions for banking and we look forward to continuing on our product roadmap as they join Jack Henry.”

According to the release, Live Oak Bank was an early adopter of Payrailz’s bill pay products and other payments technologies within its small business checking product.

Reporting its second-quarter numbers in July, Live Oak Bancshares had a total revenue for the quarter ending June 30 of nearly $208.5 million, compared with about $110.5 million for Q1 of 2022 and $141.5 million from the second quarter of 2021.

In that period, Live Oak originated nearly $960 million in loans and leases, up nearly $100 million from the previous quarter, but down about $200 million from Q2 2021.

“We continue to be optimistic about the future,” Mahan said in a July release, “as the second quarter’s performance indicates there are ample opportunities to serve America’s small businesses on our next-generation platform.”

The Live Oak announcement Wednesday follows news of other incentive awards this year. In August, Cooper announced that Port City Logistics will create 75 new jobs in New Hanover and build a 150,000-square-foot facility. The company could be eligible for up to $337,000 in state and local incentives, provided it meets specific job-creation goals.

County and city incentives were part of a package earlier for MegaCorp Logistics, which announced in March that it plans to hire 300 workers in the coming years.