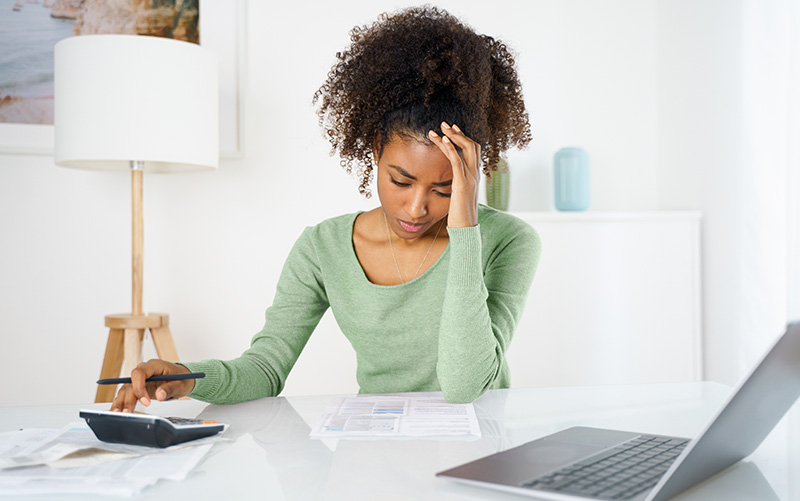 Student loans can be complicated to navigate, even with recent forgiveness changes, experts say. (Stock photo)
Student loans – more precisely, student loan forgiveness – is all over the news these days. After months of rumors, hints and hypotheticals, on Aug. 24 President Joe Biden announced his plan to forgive $10,000 of federal student debt to individuals earning less than $125,000 annually, or to couples earning less than $250,000 annually if they file their tax returns jointly.

That amount of forgiveness doubles to $20,000 for Pell Grant recipients, aiming at people who entered college with significant financial need.

The new $10,000 forgiveness plan is not to be confused with existing forgiveness for borrowers on income-driven repayment plans, such as the Revised Pay As You Earn or REPAYE plan. This program caps a borrower’s monthly payment at 10% of his or her income. Assuming the borrower makes regular payments, any remaining balance is forgiven after 20 or 25 years. Biden’s new plan shaves $10,000 off the top of the current balance for income-qualified borrowers.

Biden’s plan, which does not need Congressional approval, also extends the forbearance of monthly student loan payments. Borrowers don’t need to resume payments until January 2023. And there’s a new proposal to reduce from 10% to 5% of a borrower’s income the expected monthly payment.

So, simple and good, right?

As is often the case when dealing with complex government programs, the solution is not simple. For one thing, not everyone with student loan debt will qualify for forgiveness.“The action includes rules that will maintain the balances of debtors who currently have high incomes,” stated an Aug. 24 New York Times summary of the plan. And for those whose income does qualify them for a balance reduction, “[they] will need to navigate the balky federal loan servicing system and keep a close eye on their accounts and credit reports for any mistakes.”

In short: It’s complicated, even for financial advisers, said Ross Riskin, chief learning officer at the Denver, Colorado-based Investments & Wealth Institute. Many such advisers just aren’t that familiar with the fine print of college loans, he said. Riskin, however, is considered among the nation’s experts in this field. In his former role as a professor at The American College of Financial Services, he designed and taught courses in financial planning for educational expenses and is the author of “The Adviser’s Guide to Education Planning.”

For one thing, Riskin said, “You don’t approach [student loan debt] like you would other types of debt: paying down the highest rate of debt first, etc. These rules don’t necessarily apply when you’re dealing with student loans and are on an income-based repayment plan.”

The pandemic, he continued “has created some benefits for federal student loan borrowers, but also some missed opportunities. So we have to avoid general, broad, sweeping advice. You almost need to group people into what kind of student debt they have,and what type of borrower they are.”

The majority of borrowers choose federal student loans, for which the U.S. Department of Education is the lender.

All federal student loans require the completion of the Free Application for Federal Student Aid (FAFSA). That form asks families to report their income for the previous two years. Scott Winslow, managing partner with Wilmington firm Nabell Winslow Investments & Wealth Management, counsels families who want to start a 529 college savings plan to arrange for the grandparents, rather than the parents, to establish the account, because that way it will not be calculated as an asset on the FAFSA form.

There’s another wrinkle in federal student loan forgiveness process: Borrowers who work for 10 years in certain qualifying nonprofits or public agencies and who make regular payments on their income-driven repayment plans can see the balance they owe forgiven after 10 years. But this, too, has been tricky. The management of this program has been “abysmal,” according to Riskin, with poor information about what kinds of public service employment qualify, leading some borrowers to believe they were on the fast track to forgiveness when they were not. The government is trying to clarify and expand this program.

Between now and Oct. 31, says Riskin, the Department of Education is offering a waiver to those who have been misled.

“They’re saying if you were on the wrong [repayment] plan, they are going to give you credit [for your payments as a public service employee] as long as you consolidate your loans under a qualifying plan. They are not going to restart the clock, so you get credit for the repayment of your older loans. repayment. This accelerates the time toward forgiveness, regardless of the amount of debt you have.”

Riskin has another, perhaps surprising, recommendation for borrowers who are on income-driven repayment plans, working toward forgiveness after 20 or 25 years. If they are employed at least 30 hours per week and have not been affected financially by the pandemic or furloughed during that period, he said, “they should not be making payments on their student loans during this forbearance period.

“If you are going to receive forgiveness, you should allocate those [monthly payment] funds to other goals,” he continued. “What a lot of borrowers don’t realize, they can request all those payments back that they have made during the forbearance period. But those years still count toward their 20 or 25 years – or their 10 years if they are a qualifying public service employee.

Because there are so many curves and potholes in the road to repayment, Riskin advises borrowers to consult a financial adviser, preferably one with a Certified College Financial Consultant (CCFC) designation.

Borrowers who took out a private loans, made through banks or other financial institutions, don’t have these forgiveness options. But they might want to take a fresh look at their repayment plan.

Riskin said, “If you have private [student] debt, you might consider refinancing it because interest rates may be lower now.”

Why has student borrowing – and the resulting debt – ballooned so dramatically in recent years? One reason is that college costs have increased at a greater rate than have family incomes. Another factor, said Winslow, who earned his Certified College Financial Consultant credential from The American Institute, is that people are having babies later in life.

“That has closed the gap between sending kids to college and retiring,” he said. “Most middle-class and lower-income families don’t have enough income to save for both retirement and education, so they are better off to plan for financial aid, and encourage their kids to look at careers that pay well.”