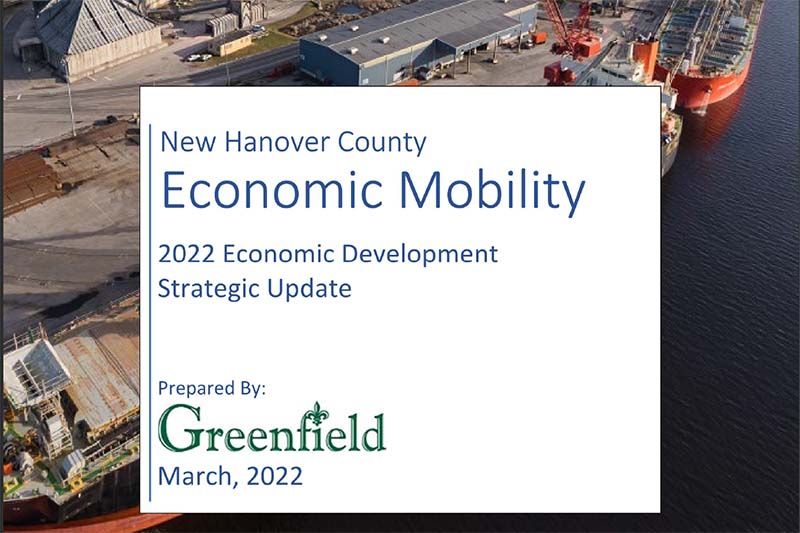 The backdrop of the Greenfield Development Company's report on New Hanover County is the Port of Wilmington, which authors listed first in their list of the area's primary assets. (Photo courtesy New Hanover County)

A refresh of the Garner report is in, and it provides an in-depth look at the region’s “unbalanced” economy, which has experienced major growth and turmoil in the eight years since the last comprehensive review was conducted. The middle-income worker and market have been left behind, the report observes, as overall growth has trended upward.

Greenfield’s review marks the first formal review of the county’s economic development scene since Garner Economics’ Pathways to Prosperity report was first released in 2014. That report prompted the county to adopt some key strategies, including infrastructure investments along U.S. 421 to spur private development and recently sorting out its economic development arms to avoid duplication and confusion.

The new Greenfield report captures elements of the region many locals sense but perhaps haven’t quite nailed down – at least all in one place. It also includes new recommendations for target sectors, like wind energy, that weren’t on the radar in 2014, but could be hugely impactful to the region.

“Local economic growth, although positive, has left some sectors behind,” the report states in its introduction. “The manufacturing workforce has contracted significantly. Income levels have evolved to the extremes of low and high, with middle income jobs shrinking, along with its resident workforce. Consequently, not everyone has benefited from the changes. The county’s economy is no longer in balance, and provides no mobility pathway for the lower income workers to advance.”

First, the region has an unbalanced economy. Employees and earnings are stratified, concentrated at the higher and lower ends while the manufacturing middle has waned (down to 4% of the total workforce, compared to the N.C. average of 10%). Second, the population is growing, but aging (at a slightly faster rate than the state), highlighting a need to retain and attract a young workforce. Third, the pandemic disrupted the local economic equation, attracting a remote workforce, prompting new business creations à la the Great Resignation, and kickstarted a reshoring trend. Lastly, an observation that won’t surprise stakeholders: The report highlights a need to identify and protect the region’s limited properties eligible for long-term industrial and commercial development.

Drawbacks highlighted are: the lack of available sites and buildings, the need to replace the Cape Fear Memorial bridge and expand utilities to available sites, difficulty keeping and attracting young workers and engineers, an aging population, weather risks and the region’s geographic positioning on a peninsula.

At the time, support for film was included as a recommendation but the industry didn’t make Garner’s top list; offshore wind wasn’t even a factor, as the push for this sector was only made possible last summer; the local tech boom was just budding; and the upheaval of e-commerce capsizing transportation logistics hadn’t yet arrived (just this year, the area has begun seeing major ripple effects, with the introduction of distribution centers by big-name companies).

Authors Robin Spinks and Mary Lilley, partners in Greenfield Development, arrived at their conclusions with the support of the county's office of strategy, which assisted with data input and helped save money on the $60,000 report. They also conducted interviews with representatives from 12 companies in the area and dozens more stakeholders.

In the report, the duo warned of the consequences of an economic imbalance left unchecked, which the region's housing affordability crisis can fester. They point to California, with an over-reliance on high-paying tech jobs and low-paying service gigs, citing an article that reported the state has experienced more inequality than Mexico. "The consequences of an unbalanced economy are expensive," the report states. "If middle wage employment in manufacturing is not regrown, there is no pathway from an entry level job to higher wage sectors."

Read the report, which begins on page 153 of the county agenda for April 18. Commissioners will hear a presentation of the report at 9 a.m.