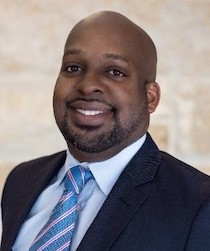 Zedrick Applin
nCino has expanded its efforts to enhance the communities within which it operates, and has chosen one of its existing employees to head up the initiative, the Wilmington-based company announced Thursday.

Zedrick Applin has been tapped as nCino’s first program manager of diversity, equity, inclusion and community, according to a news release from the company.

“Applin, who joined nCino in February 2019 as a Principal Product Manager, has played an essential role in helping develop nCino’s global compliance function as well as serving as a founding member on the CEO’s Diversity & Inclusion Council,” the release stated. “Prior to joining nCino, Applin spent more than a decade working for some of the largest financial services companies in the United States, including Capital One, Santander and USAA.”

nCino, which continues to grow as it expands the capabilities of its Bank Operating System sold to financial institutions worldwide, “has always prioritized giving back to the communities where its employees live and work,” according to the release.

“Applin’s appointment will continue to strengthen these commitments and other strategic initiatives in Wilmington, N.C. and beyond,” the release stated.

In his former position with nCino, Applin was involved in the company’s efforts to diversify its workforce.

“Having worked closely over the last two years on the development of nCino’s DE&I programming, I’m eager to continue that work through the formalization of this new position and I look forward to supporting nCino leaders in both educating and expanding the skill sets of all employees while increasing our time and resource commitments in our local communities,” he said in the release.

In addition to its headquarters in Wilmington, nCino operates branch locations in Salt Lake City, Toronto, Tokyo, Sydney and London. The company has won several awards over the past few years for its workplace culture.

“With a global workforce of more than 1,100 talented and passionate professionals from a variety of backgrounds, we are proud of the recognition we have received for our strong and diverse culture,” CEO Pierre Naudé said in the release. “However, we know that DE&I is a journey, not a destination, and we are dedicated to continuously advancing and improving our company and culture to ensure we build teams that represent different experiences, cultures, skills, and opinions.

"We further believe that building trust and listening to the needs of our communities is foundational to our success,” he continued. “Zedrick’s new position will be instrumental in continuing to advance and strengthen our dedication to build diverse teams and invest in a community-first culture.”