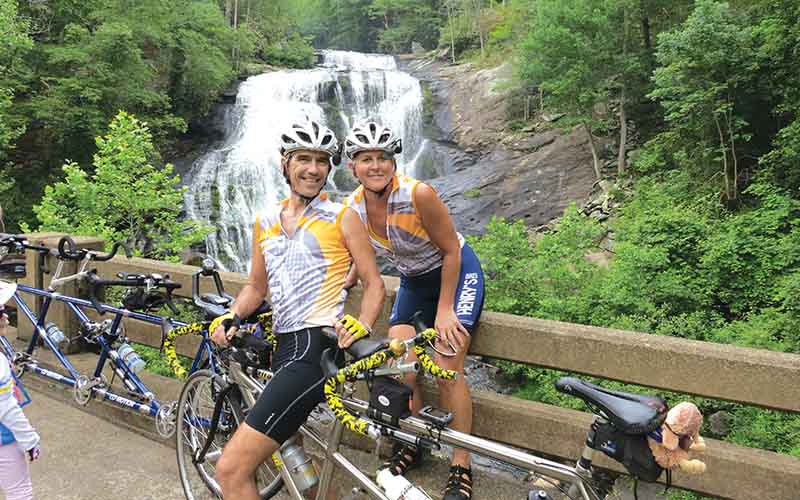 Duncan and Laura McCabe began planning for an active retirement early on in their 40-year marriage. (Photo c/o Duncan and Laura McCabe)
No matter the amount of your assets, the key to funding retirement is planning – ideally, starting in the years before you clock off the job, according to David Shucavage, president and investment adviser representative at Carolina Retirement Planners in Wilmington.

“I am shocked at how many people come in with investments but no income plan,” he said, pointing out that new retirees need to shift their focus from earning money to managing it.

Wilmington residents Duncan and Laura McCabe have had a plan since they married 40 years ago.

“We lived on one paycheck; lived below our means,” Laura McCabe said, recalling the couple’s decision to be frugal for the first 10 years of their careers as engineers at DuPont. The McCabes slept on the floor, and then on a hide-a-bed, for a year before buying bedroom furniture. They brown-bagged it for lunch at work.

The McCabes started their planned 10 years of frugality when they were still in graduate school. This front-loading of their savings, and a habit of careful money management, allowed Laura to retire when she was 51 and Duncan to follow suit five years later, at 56. These days, they vacation internationally and pursue their many interests locally.

“We knew exactly where our money was going, and so we figured out how much money we needed to live on,” Duncan McCabe said. “That’s a comfort in deciding when to retire: You know how much your lifestyle costs.”

Even though the couple eventually relaxed their spending, intentional frugality and tracking every expense became part of their pattern. For example, Laura McCabe says she can tell you exactly how much she and her husband have spent on wine since the beginning of the COVID-19 lockdown.

“One of Duncan’s sayings is that there are three steps in your financial life,” Laura McCabe said. “The first is wealth accumulation, saving early as much as you can so that it has years to grow. Then it’s wealth preservation; some people struggle with that. The third step is wealth distribution.”  Shucavage says it slightly different­ly when advising his clients.

“While you’re working, your goal is accumulation, building a nest egg: return on investment. When you are retired, that ROI means ‘reliability of income.’ It’s not how fast your growth is; it’s do you have a steady income? Many things you have been doing have to change.

“You need a plan that says, year by year, ‘How much money am I going to take out of my nest egg, and where will it come from?’” he said, adding that drawing from that nest egg should be integrated with other assets, such as a pension and Social Security. “The income plan puts together your nest egg, your pension and your Social Security income.”

He advises clients to think about how and when to start drawing Social Security. Taking it earlier means more years of benefits. Taking it later means bigger monthly payouts (and possibly a more advantageous calculation if a worker’s highest-earn­ing years are at the end of his or her career).

A married couple can have it both ways. The spouse who earns more can continue working, while the other begins drawing Social Security to supplement the family income or to invest, Shucavage points out.

For those lucky individuals who still have workplace pension plans, there’s another pre-retirement decision to make, Shucavage says: whether to take the payouts over the worker’s life only, or over the lives of the worker and the spouse.

Duncan McCabe said he and his wife are very fortunate that he worked for 32 years for a company that offered a defined-benefit pension plan. Not having children and staying in a stable marriage also benefited them financially.

Shucavage emphasizes the impor­tance of developing tax strategies as part of an income plan.

“Most people have large amounts of money in their 401(k) or IRA; money that’s never been taxed,” he said. “It is a sitting duck for the tax man. There are strategies you can use to reposition that money. Properly managing and diversifying among tax strategies is just as important as earning a bit more in the market.”

The adviser helps his clients un­derstand that an income plan should consider the different stages of retirement.

“From age 60 to 74, you’re in your go-go years,” he said. “Your knees and hips are probably still original. Your grandkids are young and want to see you. You have friends to travel with. You don’t mind being active.”

Beyond that is are the “slow-go” years – from age 75 to perhaps 85. “You have more doctors’ appoint­ments, more funerals to attend,” Shu­cavage said. “The idea of flying to Australia is not that attractive. Your grandkids are taller than you are and you have lost your luster.”

Beyond the slowdown is the proba­ble “won’t go” phase, he added.

“If you have a good income plan, give yourself permission to spend more in the go-go years,” Shucavage advised. “One thing we will often do is set a limit for each year, depending on what phase you’re in. We’ll design a plan that makes sense to you.”

Of course, sometimes life just doesn’t go according to plan. Take the major disruptions this year caused by a certain virus.

“The global pandemic is the perfect example as to why someone’s financial plan needs to have some room for flexibility,” says John Zach­ary, a certified financial planner at Pathfinder Wealth Consulting. “Life is dynamic, and that won’t change in retirement.”

Zachary notes that it’s important to test your plan with financial uncer­tainties, to make sure that even when things go awry, you’ll still have the resources to carry on.

“We call this ‘scenario analysis,’” Zachary said. “It’s where we throw many scenarios at someone’s finan­cial plan: a market crash (which we saw in March); an untimely death (to make sure survivors are protected); high inflation, especially in the case where someone has a pension that doesn’t have cost-of-living increases, typical of private-sector pensions; and probably the most talked-about: rising health care costs and long-term health care expenses.”

That’s why it’s important to revisit and update a financial plan on a regular basis, Zachary said.