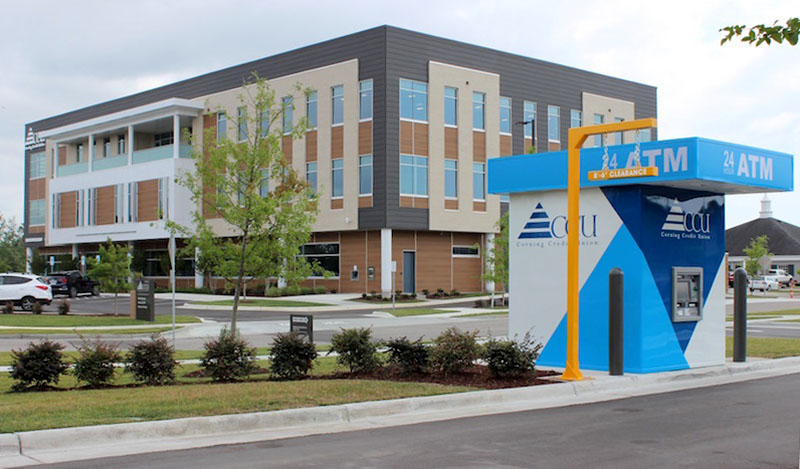 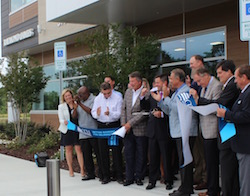 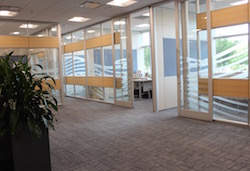 advising is provided through a partnership with Raymond James Financial.

All five of Corning's mortgage originators will now be based in the new office, according to credit union spokeswoman Stephanie Carl.

The second and third floors of the building will house support staff for the Wilmington region. The space is a mixture of flexible open space and glass-fronted offices and meeting rooms. Two large expanses on the second floor will be used as team meeting rooms.

"This is the beginning of a new era for us: an era of accelerated growth, new jobs, investments and loans," Corning Credit Union President and CEO Gary Grinnell said in his remarks Wednesday. Currently, Corning Credit Union has about 27,000 members, according to Grinnell.

The grand opening comes 26 years after Corning Credit Union entered the Wilmington market with a location in leased space, and 21 years after it opened its first freestanding Wilmington branch on Racine Drive. Now the financial institution operates five offices in the market: three full-service branches in Wilmington and one in Leland, plus a service center in Hampstead.

Of the credit union's 350 employees, about 58 work in the Wilmington market. Carl said that in the next five to ten years, the financial institution expects to add between 50 and 100 more people to its Wilmington regional team.

Growth could also necessitate another branch, Grinnell said Wednesday, adding the credit union is "evaluating options now" as to where that future location might be.

The new regional office is high tech, in both its structure and its operations.

Facilities supervisor Randy Hamilton said that a space underlying the second floor contains not only the cables and wires one might expect, but also mechanisms that allow reconfiguration of the non-loadbearing walls on the first floor. 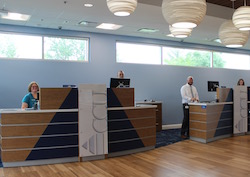 Replacing the traditional teller counter are three work stations (at left). This design, Carl explained, allows credit union members to step behind the station and view transactions or information along with the teller. An electronic machine, known as a cash recycler, replaces the traditional cash drawer at each work station.

While officials celebrated the future of Corning Credit Union in this community, Wilmington Mayor Bill Saffo recalled the realities of the 2007-2008 financial downturn.

"We had no idea what [the collapse of Lehman Brothers and other institutions] meant for us little guys," Saffo said.

When the downturn spread to Wilmington, small businesses were squeezed and struggling. They needed loans. Corning responded with financial help, Saffo said.

"This group here ... was a lifeboat for a lot of people. We owe you, and believe in that bond," he said.

Becker Morgan Group was the architect for the new regional office. McKinley Building Corp. was the general contractor.

Corning Credit Union officials declined to release the cost of the new structure, but did say that it represents a "significant investment" in the community.