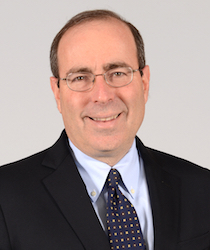 Tom Barkin
Attendees at a “fireside chat” Monday afternoon at UNCW’s Cameron School of Business got a peek inside the Federal Reserve. Tom Barkin, president and CEO of the Federal Reserve Bank of Richmond, talked to University of North Carolina Wilmington students, faculty members and members of the public about how he prepared for his current role, how he views it and what he has learned from visiting many communities within the Richmond Fed’s five-state – plus Washington, D.C. – district.

Barkin, who joined the Richmond Fed in January 2018, came to his new role with a background in management consulting. Faced with the necessity of holding his own at the Federal Open Market Committee, which sets interest rates, Barkin said he wanted to discern what his contributions might be. He also studied intensively.

“I would be in a room with 16 of the best bankers and macroeconomists, and I needed to talk in the language of those people. I went home and read more than 7,000 pages of macroeconomic theory,” he said.

On a more micro level, Barkin said he – like other Fed district presidents - travels every week to communities within the Richmond Fed’s district.

“I talk to business and civic leaders about what is and is not working for them. I take that information back to the Fed,” he said of his first 15 months, “It has been a huge learning curve, a huge education, but it has given me a vision for how I can contribute [to the Fed].”

In an extensive question-and-answer session following his introductory remarks, Barkin emphasized that, overall, the U.S. economy is strong and stable. Other points included: Other topics Barkin addressed included debt-to-GDP ratios, wealth inequality, the dominance of the dollar as a reserve currency, and the need to increase financial aid for people who want to earn trades-related certificates as opposed to degrees.

When asked what two thoughts he would like to leave with the students in his audience Monday, Barkin said, “I hope they heard clearly how interested [the Fed is] in the economy of the city they live in, and what needs to happen for them to stay here.”

Second, he referenced what economists have learned as to the value of education and its importance to life, health and income outcomes, saying, "Outcomes are massively higher with a bachelor's degree."