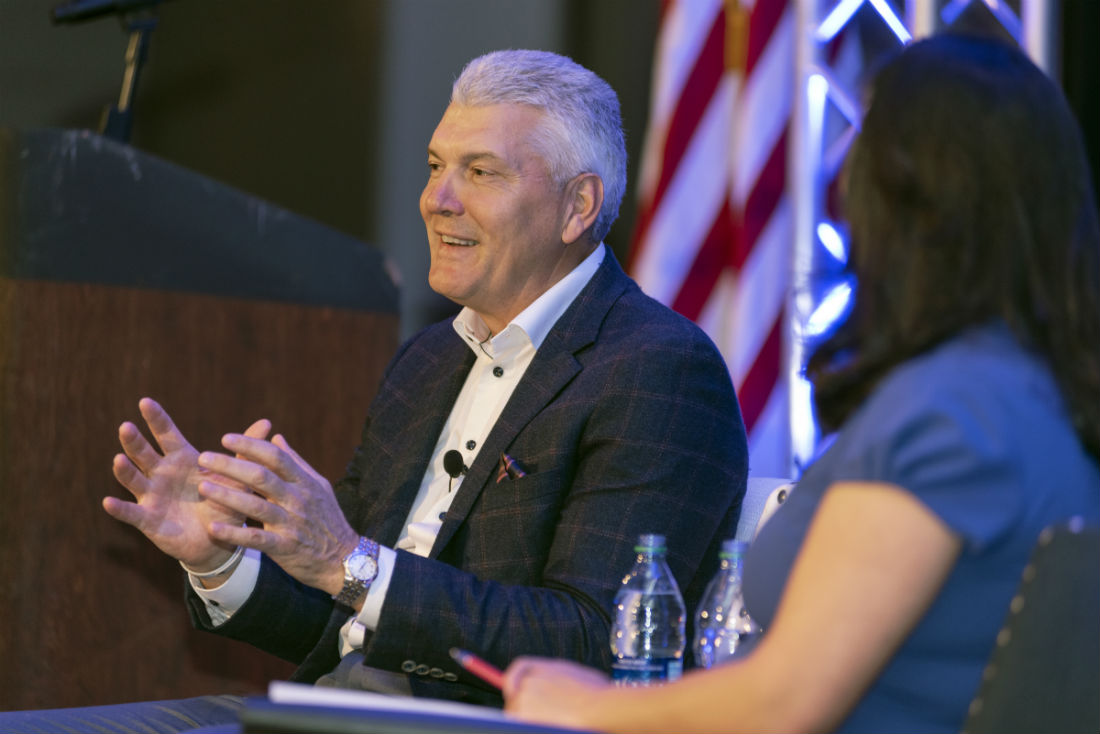 Naudé spoke Wednesday to a sold-out luncheon crowd of more than 500 at the WilmingtonBiz Conference and Expo, presented by the Greater Wilmington Business Journal.

As a 2012 spin-off from Live Oak Bank, Naudé said, the software seedling had the access to capital it needed to take its Salesforce-based software to a much more extensive market. He emphasized the importance of nCino's reaching a critical presence in that first market before expanding into others.

That expansion is happening now. Naudé spoke about nCino's two strategic initiatives: to expand internationally and to expand its software from supporting commercial lending only to streamlining retail banking functions and, most recently, customer onboarding processes.

"All customer onboarding used to involve cumbersome processes. Now, with the cloud, they can be fluid," Naudé said.

nCino's international growth is supported by offices it has established in London, England, Sydney, Australia, and Toronto, Canada. From those bases, the company is expanding its reach throughout Europe, the Asia Pacific region and North America, respectively. He detailed the work entailed in providing software that navigates 47 languages, a variety of currencies, and a number of regulatory frameworks.

"We're studying an entry into Japan," the CEO said.

Asked if Brexit difficulties could have an impact on nCino's operations and growth in the U.K. and Europe, Naudé responded that the lengthy Brexit debate and associated uncertainties have been "frustrating," but that he believes there's a large enough market in the U.K. to support nCino's ongoing business there. But if a continued headquarters in London proves too problematic, an option would be to move nCino's European office to Amsterdam.

"The Dutch are flexible," he said, citing the Netherlands' cultural and business connections with many of its neighbors.

Asked if nCino hopes to become the banking software of choice in the SunTrust-BB&T merger, Naudé responded, "You always hope you're on the winning side of a merger."

Since SunTrust is already an nCino customer, the company hopes that the merged entity will continue to use that technology, he added.

One of Naudé's principal themes is nCino's people-centric culture. For the past several years, the company has ranked as one of the top technology firms to work for.

In his remarks Wednesday, he spoke about nCino's egalitarian mindset, encouraging each of its employees to think freely and creatively to solve problems and advance the company's success.  The three groups of people nCino focuses on, Naudé said, are 1) its employees, 2) its shareholders and 3) its customers.

nCino's location in Wilmington has been a contributing factor to its success, according to its CEO.

"This community has been fantastic to us," Naudé said. "The most pleasant surprise has been the quality and level of people we have found here. We now get about 1,500 resumes every quarter and hire 150 to 200 people each year." He added that, of nCino's roughly 600 employees, more than 200 have come from UNCW.

Asked what challenges exist in attracting potential hires to Wilmington, Naudé said some candidates want to know what other tech employers exist in the area, should a job with nCino not work out. They also want to know if there is employment for their spouse.

"We have a fairly large number of couples working in our company," he said.

nCino's recruiting function resides in its marketing unit because the company sells the Wilmington area's amenities and quality of life as part of its recruitment efforts, Naudé explained.

When he was asked to explain the presence of many alligators in the nCino workplace, Naudé recounted a hunting expedition that had landed an alligator head in the headquarters building. He told customers that the head symbolized nCino's ability to eat the competition.