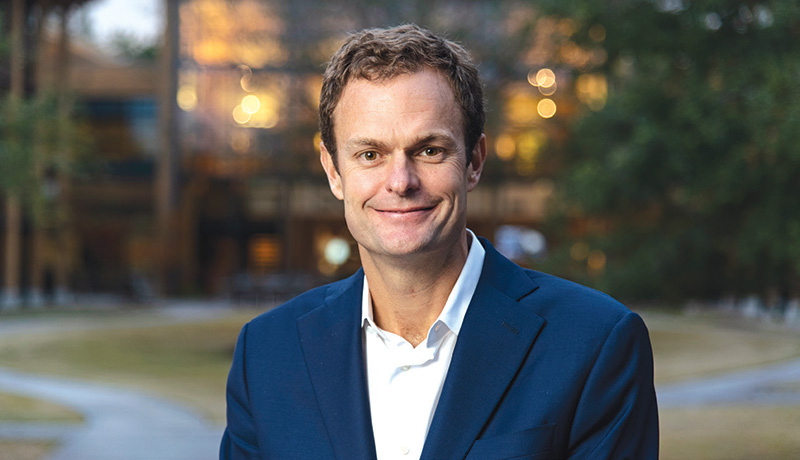 Live Oak Bancshares officials in April announced that Huntley Garriott, a former Goldman Sachs partner, would be president of Live Oak Bank, a position he took over in October. (Photo by Michael Cline Spencer)
A new subsidiary, leadership changes and construction were part of Live Oak Bancshares’ year, marking the company’s continued growth and influence in Wilmington’s fintech industry.

Canapi has the mission to partner with and invest in companies that provide new platforms for the banking industry, according to the release.

One Canapi Inc. partner includes Woodforest National Bank, a Texas-based bank that has some of its branches located inside Walmart stores.

A few weeks later after its launch announcement, Canapi stated it was investing in Greenlight Financial Technology Inc., a fintech company that created a smart debit card for kids, teens and college students, according to a Feb. 21 news release.

Another Live Oak Bancshares company, Live Oak Bank, was in the news with its announcement of a new bank president.

Garriott was a partner at Goldman Sachs in its Investment Banking Division in New York City.

With its new leadership, Live Oak Bank announced in November that it is expanding its lending services by providing loans for commercial real estate projects.

It is also providing conventional asset-based lending products to small- and medium-sized businesses as well as adding Mike Shepston as a senior loan officer in the General Small Business Administration Lending Team.

The features, My Spending and Spendable Balance, are banking tools that give banks new ways for delivering expenditure and banking data, so customers can make informed decisions.

Apiture announced in October that SunTrust Banks Inc. invested in the company, which would allow “the open API-banking platform to further develop and accelerate its product roadmap,” states a news release.

As Live Oak Bank continues to evolve past its initial SBA-lender roots, one of its new projects was the launch in September of Live Oak Private Wealth, a wealth management arm that operates as a subsidiary.

Construction was completed at its $16 million, two-story parking garage that holds 600 parking spaces.

The Business Journal previously reported that company officials are in talks for plans on Building 4, which would cost $500,000 for its plan and design and about $20 million for its construction cost.