What's Next For Live Oak? 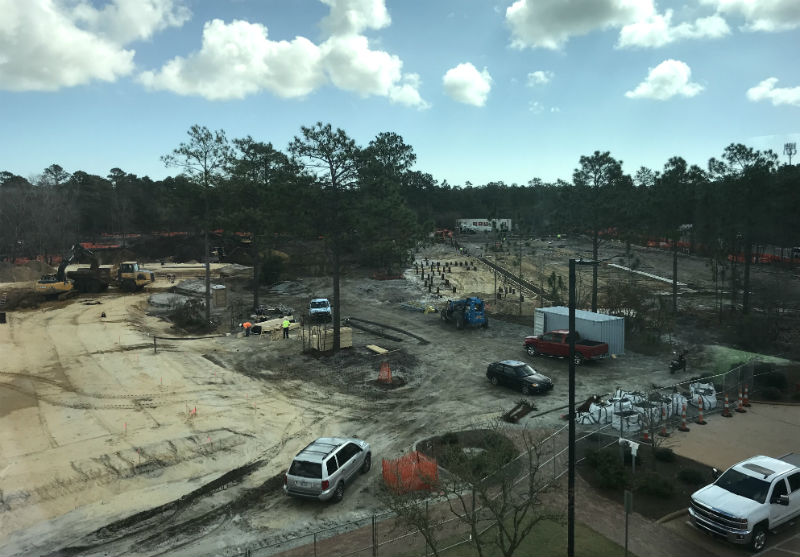 A view of construction of Live Oak's Building 3 (from left) and parking garage, from a window in Live Oak Bank's Building 2. A fourth building is in the works for the campus on Tiburon Drive in Wilmington. (Photo by Cece Nunn)
Live Oak officials are discussing plans for a fourth structure on the bank's Wilmington campus that could bring companies to the Port City to develop the next generation of banking technology, as a third Live Oak office building and a parking deck with a fitness center are already under construction.

The idea would be to use the additional office building, and possibly more, to help replicate the success of Live Oak spinoff nCino, a Wilmington-based banking software company that has become "a very valuable company," especially after its latest round of funding led by Salesforce Ventures, said Live Oak CEO James "Chip" Mahan.

Lee Williams, vice chairman of Live Oak's board of directors, said of nCino, "Market-wise, it's worth over $1 billion. From zero five years ago to $1 billion in Wilmington, North Carolina."

Mahan said Pierre Naudé, CEO of nCino, and his team have "done a remarkable job, but the point there is ... why not do that again?"

As part of an aim to foster multiple companies like nCino in Wilmington, Live Oak Bancshares (Nasdaq: LOB), parent company of Live Oak Bank, announced Feb. 9 that it had launched Canapi Inc. (formerly Live Oak Ventures). Mahan explained that Canapi Inc. and partners, including Woodforest National Bank, a private bank with hundreds of bank branches in Walmart stores, will be testing ways to transform bank technology, including outdated systems many branches use.

“Some of the biggest banks in the land [including SunTrust Bank] think that we understand more about this than anybody else, and they want us to be the guinea pig to try this new stuff, so they are beginning to invest in these companies with us,” Mahan said.

Among those side-by-side investors, in addition to SunTrust, are Ally Financial and KeyBank.

Companies such as Apiture, a joint venture between Live Oak Bancshares and First Data (NYSE: FDC) that is opening an office in downtown Wilmington, and other fintech companies that Canapi invests in and partners with are the kind of firms that Live Oak officials want to bring to the Port City.

“Because a lot of these people are our friends, we’re going to try to convince them to move all or part of their companies into these buildings where we can watch them,” Mahan said, referring to the fourth building and even more potential structures on land at the Live Oak campus at 1741 Tiburon Drive, off Independence Boulevard in midtown.

Founded in 2008, Live Oak broke ground on its first building at Tiburon Drive in 2012 and moved there in 2013. Two years later, employees moved into Building 2, and Building 3 will hold at least 385 additional Live Oak employees and be three-quarters full when its open, Williams said. The company currently employs nearly 500 people.

In a recent investment example of growth for Canapi, officials announced Feb. 21 that Canapi has invested in fintech company Greenlight Financial Technology Inc., creator of a smart debit card for kids, teens and college students.

Greenlight raised $16 million in Series A financing, according to a news release last week. The funding round was led by TTV Capital with participation from existing investors, New Enterprise Associates and Relay Ventures, and Canapi, SunTrust Bank, Ally Financial, nbkc bank and the Amazon Alexa Fund.

“Our focus is to partner with cutting edge companies that are truly revolutionizing the way people interact with the financial services industry,” said Neil Underwood, Canapi managing director, in the release. “Greenlight is doing just that by giving parents a great product, while supporting Live Oak’s digital deposits strategy.”

“With a focus on open API technology and a proven track record of transforming how financial services are delivered to the market, Canapi is the right partner to bring Greenlight to millions of additional families and help parents prepare their children for financially successful futures,” said Tim Sheehan, CEO and co-founder of Greenlight, in a release.

Meanwhile, on the Live Oak campus, Monteith Construction crews are working on a $16 million, two-story parking garage with 600 spaces and an 18,000-square-foot employee fitness center, while Clancy & Theys crews are building the four-story, 64,000-square-foot Live Oak Bank Building 3, which has an estimated cost of $20 million. Both structures were designed by LS3P, and all of the work is expected to be finished by around June 2019, Williams said.

He said company officials are “very softly” planning Building 4, expecting to spend about $500,000 on its planning and design phase over the next two to four months.

Building 4 would also cost about $20 million, Mahan and Williams said.

But the buildings are mainly symbols of expansion, they said.

“We’re getting larger; that allows us leverage to do different products,” Williams said. “These buildings and all of that is probably not the real story when you get right down to it. They’re the byproduct.”