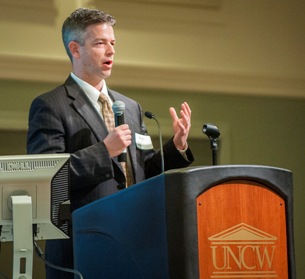 Brian Daley, managing director and head of Equity Research at U.S. Trust, Bank of America Private Wealth Management speaks during UNCW's Outlook Conference (Photo courtesy of Will Page/UNCW)
Current economic indicators may herald a brighter future, but don't put on your sunglasses quite yet.

Presenting the national outlook, Simpson said that the U.S. economy is currently sending mixed signals. On one hand, he said, GDP growth for the first half of the year has been an “anemic” 1.25  percent, below what is needed for a growing economy.

On the other hand, labor market indicators are up, household balance sheets are healthier and debt service is at an historic low. Stocks are at record levels and home prices are improving, he said.

Among the economic headwinds, Simpson listed a “restrictive” lending posture, a stringent regulatory climate, higher cost of capital and “subdued” business investment – although he noted that companies are starting to invest and hire after sitting on “massive” liquid assets.

Hall, in what he noted was his 11th and final outlook presentation before he retires in May, offered a picture of the local economy.

He pointed to “stubborn” unemployment levels and said that the new normal rate may be as high as 5.5 percent.

“We have not seen the growth we had after previous recessions, although retail sales have rebounded, as has tourism, with an 8 percent growth in fiscal year 2014 as compared to fiscal year 2013," he said.

Hall said that residential real estate indicators are headed in the right direction, although there is still room for growth, and that traffic at Wilmington International Airport is rebounding after a “dramatic decrease” in 2013.

The economist predicts a local GDP rate for 2014 at about 3 percent, rising slightly in 2015 to about 3.3 percent.

“The magic number of 2.5 to 3 percent growth is needed to keep the unemployment rate stable,” he said, adding that sectors leading economic growth locally are health care and financial services, with real estate emerging from its slump as well.

“Before the Great Recession, one of every five people in this region had a job that was related to real estate. Now it’s more like one in 11,” he said. “Our economy is more diversified now.”

Tuesday's conference also looked at the financial services sector, with a keynote speaker and a panel of local investment experts.

“There’s a tremendous amount of fear of the future,” said financial services panel member Donis Smith, of UBS Financial Services in Wilmington. “Changing regulations and uncertainty about future taxes particularly concern business owners, but they also worry about how to protect their businesses and their family from cybercrime, lawsuits and terrorism if they travel abroad."

Smith added that clients' financial concerns also change with age, from midlife worries about outliving their money or being able to retire, to worries later in life about becoming a burden on their families because of health problems.

Panelist Billy Morton, of U.S. Trust, Bank of America Private Wealth Management's Wilmington office, mentioned the higher standard to which financial advisors are being held by recent federal regulations. The earlier standard was whether a client’s investments were “suitable” for his or her situation.

“Now we’re asked ‘Are you working in the client’s best interest?’” Morton said. “In a volatile market, clients are more dependent on our advice.”

Panelist David Swain, a real estate developer, pointed out that investments in commercial real estate are coming not only from local sources but also from institutions – some in foreign countries.

“They are looking for the highest quality real estate they can find,” he said.

His Wilmington-based company, Swain said, is currently looking at development opportunities in a Charlotte and Raleigh metropolitan areas. “Shopping centers and retailers are starting to come back,” he said.

Swain & Associates is still interested in commercial development in coastal North Carolina, but, Swain noted, “real estate here is more expensive, while rents are about the same [as the Charlotte and Raleigh areas], so it’s less profitable.”

He emphasized the global nature of capital flow, and pointed to the factors he believes will drive the international economy:

“Our biggest worry?” Daley asked. “Europe, which is still muddling along [economically]. We took our medicine early, getting rid of bad assets. Europe still has not done that.”

Huffmon and Livengood presented a picture of current trends in commercial and residential real estate, respectively. Newkirk, highlighting current and upcoming NCDOT projects in the Wilmington area, advised property owners on the most effective way to negotiate with the agency on property purchases.

The conference was presented by UNCW's Cameron School of Business and the Swain Center for Professional and Continuing Education.

nCino lays off 7% of workforce