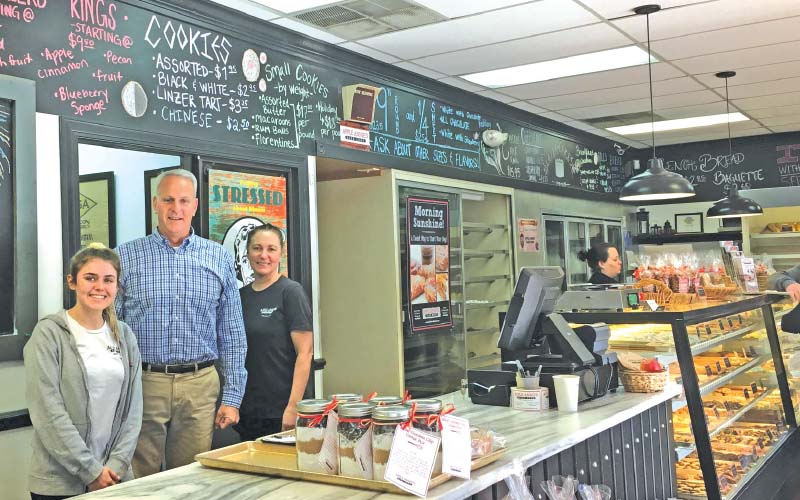 Regan Pope (from left), Apple Annie's Bake Shop owner Rob Cooley and Nancy Giufurta are shown in the Apple Annie's location on South Kerr Avenue in Wilmington. (Photo by Jenny Callison)
Rob Cooley, owner of Apple Annie’s Bake Shop, wishes he could help his employees save for retirement by matching – up to a certain point – their contributions to a retirement account.

“We’ve been talking about something like this at Apple Annie’s for years,” Cooley said, but the barrier has been being able to afford it as a small business owner – a common situation for other similar-sized operations.

More than half of North Carolina’s workers –1.7 million people – have no access to a retirement savings plan through their employers, said Lisa Riegel, AARP’s Raleigh-based advocacy manager. She cited several other state statistics: Of that average Social Security income, Riegel said, “That’s not enough. [The low level of retirement savings] is already a crisis. It affects the whole social safety net; it affects all of us. Studies show that low- and moderate-income workers want to save; we just need to make it easy and accessible.”

Riegel said a 2017 study by Craig Galbraith, a faculty member at University of North Carolina Wilmington’s Cameron School of Business, concluded that if preretirement lower- and middle-income workers in North Carolina started then to save for retirement at a modest (3%) rate, their combined savings “could result in a $448 million accumulated savings to the expected state expenditures between 2018 and 2030. This represents a savings of 8.25% of the total Medicaid expenditures needed to support the cohorts of North Carolinians turning 65 between 2018 and 2030.”

Because of ballooning health care and other costs for their 65-plus populations, many states are enacting or considering retirement savings programs for residents not already participating in a plan. Plans range from so-called auto IRAs, to which people contribute directly with no employer involvement, to state-matched, employer-matched payroll deduction plans.

AARP officials’ advocacy for a retirement savings solution for North Carolina resulted in the passage last August of a bipartisan bill, HB 604, that authorized a study of various options. State Sen. Bill Rabon (R-Brunswick) championed the bill in the Senate, Riegel said.

The bill mandates the formation of a legislative committee to study possible models for a North Carolina Work and Save program. The committee report is expected to recommend and outline a program that best suits North Carolina’s small businesses. The report is due at the end of March, but the deadline may well be extended, Riegel said.

Cooley is one of a couple of small business owners asked to join legislators as members of this committee, called the Joint Legislative Study Committee on Small Business Retirement Options. The body had its first meeting Feb. 12.

He sees a retirement savings option as an important benefit that would help his business and his employees, as well as all kinds of small businesses across the state.

Apple Annie’s employs 34 people full time or part time at its two bakery locations in Wilmington. Another seven to eight employees – often college students or prior employees – join the company temporarily during busy seasons such as Christmas.

“We try to pay above-market wages and bonuses, all the while telling [our employees] that they need to put money away for retirement,” Cooley said. “We pride ourselves on going above and beyond, but based on our cost structure, it’s hard.”

A Work and Save program that offers a state match would be a “win-win-win” for small businesses, for workers and for the state, resulting in greater retirement savings for all small business employees, Cooley continued.

“It’s not an entitlement or a handout,” he said of the state match concept. “It would help offset the amount an employer has to pay to match the employee’s contribution.”