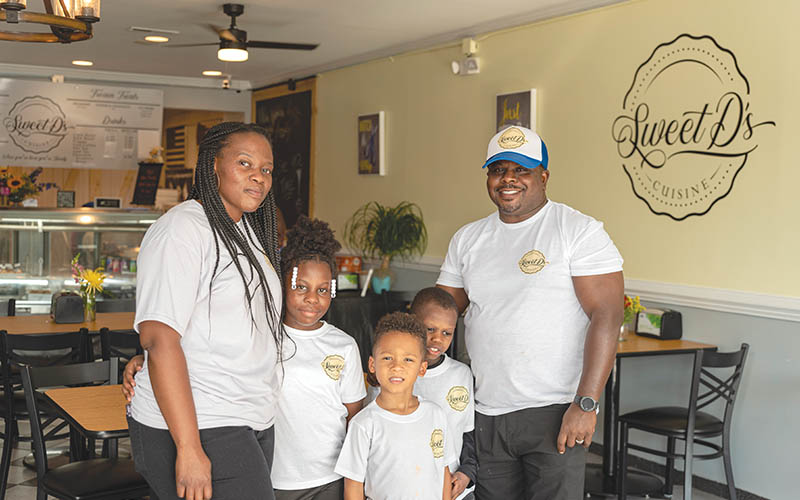 Between the pandemic curtailing a lot of normal foot traffic at local businesses and depending on word-of- mouth to draw in customers, a soft opening seemed reasonable for Aug. 1.

By the end of the second week being open to the public, Dickey realized he needed to hire a general manager sooner rather than later. He couldn’t oversee front-of-the-house and back-of-the-house and keep within his expectations of stellar customer service.

“My wife couldn’t believe it when I told her during the first week of service how busy we were,” he said with a laugh. “She took off work the second week to help out and see for herself. Customer response went above our expectations.”

By Aug. 22, Sweet D’s was churning out 200 dozen sweet croissants a day – not to mention other treats, like mini pies, cupcakes, cake pops, homemade ice cream and milkshakes.

Local hospital and medical industry workers, immediate neighbors of the bakery, were the first to show support. Once social media caught the sugar rush, it sent the bakery viral among locals.

“The day I signed the lease on this property, I had a feeling it was going to do well,” Dickey said. “I knew God was going to look over me and make this happen – but I had no idea it was going to be this popular. I just wanted to offer something sweet to people during these hard times we are facing as a nation.”

On Aug. 28, the bakery’s sales tripled after local TV station WECT ran a story that garnered 87,000 views. The bakery had to enforce a one-dozen limit per customer for the rest of the day until they could restock their product.

“These things are addicting,” said one gentleman upon entering the bakery. “I’m already a return customer – and I was just here yesterday.”

“What’s your specialty?” another asked.

“The cream-cheese filled croissants,” Dickey answered. “But we also have specialty items every weekend; this weekend it’s all Oreo-flavored.”

Sweet D’s croissants come either plainly glazed or stuffed with various fillings, like chocolate, lemon, raspberry, blueberry, apple-caramel, Bavarian cream, white cream, strawberry cream cheese and so on. They serve them coated in cinnamon and powdered sugar, as well as offer specialties like chocolate-covered banana-filled, vanilla-covered strawberry- filled and maple-bacon.

“My sister started us on this journey 10 years ago,” Dickey said. “We’d always stop in Whiteville at Darel’s, [another bakery that specializes in sweet croissants]. We felt a place like that would do great in Wilmington.”

Dickey hired a professional food company to develop and perfect their dough recipe, so it’s crispy on the outside, with a flaky yet soft crumb, and perfectly sweetened by its glaze. His 20-plus person staff pump all fillings to order.

“Making sure everything is fresh is how we stand apart,” Dickey said.

No stranger to hard work, Dickey’s entrepreneurial spirit gained its footing more than a decade ago. He started Gifted Hands Services, a cleaning company that employs 32 people. During COVID the company had larger cleaning contracts – Lowe’s Home Improvement and UNCW, among them – which helped finance the opening of Sweet D’s.

Branching out into the restaurant industry has been a dream of Dickey’s since youth. In fact, the name of the bakery comes from his mother, Dee, and father, who went by the disc jockey name “Sweet D” on 1490 AM.

“My mother had a restaurant when I was younger in the Seabreeze/ Carolina Beach area,” Dickey said. “I can remember her making shrimp burgers and hamburgers. Also, my grandfather was a good cook – he fed 13 kids daily. I’d watch him and my grandmother make homemade biscuits, but he would never tell me the recipe. He just said, ‘You gotta do it and feel the dough.’”

Dickey already envisions Sweet D’s evolving into a savory restaurant down the road. He also plans to expand the sweets menu to include gluten-free items.

Taking in customer feedback is important, too, and being community- inclusive, Dickey said.

“We have talked about starting a book club for kids,” he said, “so every time a child finishes reading a book, we give them … something sweet. We think it’s important to reward hard work.”

If the success of his first bakery is any indication, growing into a second, even third location seems like a natural next step. “Franchising is a possibility,” Dickey confirmed. “It’s something I’ve already considered. People are coming in from Charlotte and Raleigh, asking if we would open a Sweet D’s in their city. It’s been truly amazing.”