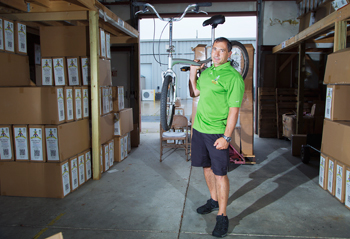 Glide Bikes founder Ed Mondello has seen steady growth for his balance bikes, especially for a model designed for older children with developmental delays. (Photo by Chris Brehmer)
Ed Mondello may be bringing some jobs back from China – and by doing so may get his balance bikes into the hands of even more customers.

It’s been 10 years since Mondello, the founder of Glide Bikes, puttered in the basement of his Boston area home and came up with a new way for kids to get the hang of bike riding.

Moving his company to Wilmington in 2005, the inventor developed several versions of his original balance bike, the Mini Glider. The bike, which remains on the market, helps first-time riders learn balance and steering without the aid of training wheels, pedals, a crankset and chain and features a lower center of gravity, giving it increased stability.

Mondello likes to point out that the Mini Glider was the only balance bike designed and manufactured stateside. But as orders mounted, he shifted manufacturing to China in 2007, where a still lighter-weight bike was produced.

Now, after a decade of peddling hard, Mondello seems determined to reduce his presence in China, create more jobs locally and carve out a special-needs niche among the developmentally disabled.

Free Trade Zone Chance
The announcement in March by the N.C. Department of Transportation that a 24-county area including Brunswick, New Hanover and Pender counties is expected to become a newer type of free trade zone (FTZ) came as Mondello began seeing a growing demand for special-needs bikes.

That uptick, along with sales of earlier Glide Bikes models in Canada and a desire to break into the Mexican market, got Mondello thinking about moving some of his production back home.

Under the newer FTZ framework, companies like Mondello’s could manufacture, assemble or handle goods within the zone, ship them out of the country and never pay customs duties.

Currently, it can take 18 months or longer for a business to be designated as a site within the FTZ, said Lori Fuller, NCDOT’s deputy general counsel for logistics. Under the department’s proposal going to the U.S. Foreign Trade Zone Board, approval of a company’s application could occur in just six to eight weeks, she said.

“We don’t yet have Wilmington area companies intending to apply,” Fuller added.

Glide Bikes may be the first.

“We’ve had several meetings with companies that say they can help us produce parts of our bike,” Mondello said. “We could then bring those to this free trade zone, with the rest of the parts imported from China or wherever we have to get them and then do the assembly there,” he said. “Instead of having 20 guys making bikes in China, we could do that here.”

With duty-free protection, Glide Bikes would reduce the cost of importing overseas parts to Wilmington and cut its costs when trucking bikes into Canada, Mondello explained. “That would  help us greatly with that market, and we have not been able to really penetrate the Mexican market,” he said.

In addition, assembling bikes inside the area FTZ would allow for greater control of inventory.

“We’ll be able to have more just-in-time inventory,” he said.

Other than North America, Glide Bikes is experiencing growing demand in Australia, New Zealand, Japan and the United Kingdom. There, Mondello’s distributor sells only to special-needs buyers and went through “a couple thousand” bikes last year.

Special-needs niche
Glide Bikes’ newest bike, the Super Glider, is designed to meet the needs of older children with developmental issues as well as adults who have never ridden before.

Unlike the earlier Mini Glider for children ages 2-4 and the Go Glider for those between 5 and 10, the Super Glider has a larger frame, adjustable seat, chains and brakes as well as optional pedals. It also incorporates Glide Bikes’ lower center of gravity.

“Their feet are on the ground. … Just push lightly, and the bike will start to balance by itself once they reach two miles an hour,” Mondello explained.

“It enables them to experiment and push, without the pedals, up to about eight or 10 miles an hour” before using the pedals when the rider is ready, he said.

Mondello is raising awareness of the Super Glider with special-needs advocates and educators.
Mondello expects the Super Glider to double in sales each year during the next three years. About 400 of them were recently ordered from his Chinese supplier to cover the first six months of the rollout. The bikes are priced at $289.99.

Call in the desert
Mondello, an avid mountain biker, knows that sometimes, business is an uphill climb. He remembers the tough time he had getting Glide Bikes rolling with financing.

“When I first started the business there was no capital to be had,” Mondello said. Bridging the gap with credit card advances, he kept shopping for a loan during the recession before striking up a relationship with an in-state bank.

Another time, pedaling through the desert during a break at a Las Vegas trade show, Mondello took a surprise call from a producer of the hit TV show Shark Tank.

Mondello reviewed the contract and objected to a clause requiring him to pay a percentage of revenues or equity to get on the show.

But by that time, Glide Bikes was experiencing triple-digit growth and had relationships with both national and regional retailers.

Regardless of what happens during his next decade in business, Mondello believes his company has already made its mark.

“We still triggered something that has changed the way people have learned to ride a bike,” he said.