Coldwell Banker Sea Coast Advantage has leased 18,000 square feet in Dungannon Village (above), a 24,000-square-foot mixed-use building at Autumn Hall, along with space at Barclay Commons. (Renderings courtesy of Coldwell Banker Sea Coast Advantage)
The area's largest residential real estate firm is expanding with the lease of two large office spaces in Wilmington, including most of a new mixed-use building in the works at the entrance to Autumn Hall.

Realtors with Coldwell Banker Sea Coast Advantage are expected to move from the firm's current offices at the corner of Military Cutoff Road and Sir Tyler Drive to Dungannon Village, a new building at Autumn Hall off Eastwood Road, by spring 2017. In another office new to the company, a smaller group of the company's agents are expected to begin operating in the fall of this year from a midtown Wilmington location in Barclay Commons. 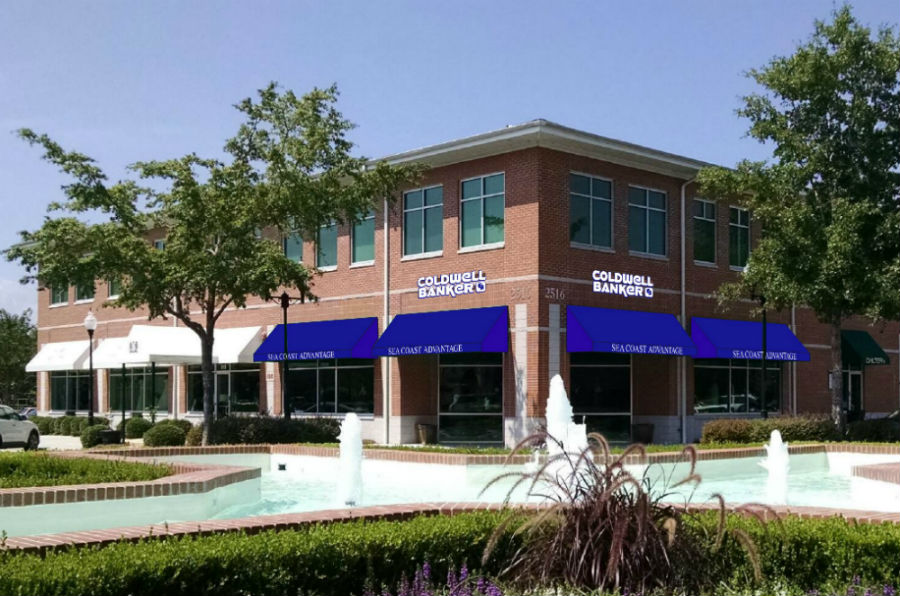 Sea Coast Advantage has leased all of the second floor and part of the first floor in Dungannon Village, and the midtown office (shown right) will encompass 8,500 square feet on the first and second floors of 2516 Independence Blvd. in Barclay Commons, the release said. The firm currently uses 25,000 square feet of space at 1001 Military Cutoff Road, in addition to 10 other offices throughout the region and Jacksonville.

“Midtown and Autumn Hall are two of the most rapidly growing areas of our community, with a great deal of commercial and residential developments underway and planned for the future in both locations,” said Tim Milam, president of Coldwell Banker Sea Coast Advantage, in a release Thursday. “Having two new offices in these areas will allow us to better serve the buyers and sellers of New Hanover County. Our mission at Coldwell Banker Sea Coast Advantage is to help buyers and sellers achieve their real estate goals by providing extraordinary customer service, and the convenience and accessibility of these two new offices go a long way to helping us better achieve that mission.”

Both transactions involve long-term leases. The Autumn Hall building will be a two-story, more than 24,000-square-foot building. Coldwell Banker Sea Coast Advantage will occupy 18,000 square feet, and additional tenants in the building could include a deli or coffee shop. Alex Paen and Sherri Pickard of Sea Coast Advantage will be the managing brokers at Dungannon Village, supervising about 150 agents, the news release said.

"We're really excited about having Sea Coast. They're one of the premier residential brokerage firms in Wilmington with a great reputation," said Mike Brown, a broker with Cape Fear Commercial.

Brown and Howard Coupland are the agents from Cape Fear Commercial who, in leasing transactions for the building, are representing the Trask family's limited liability company that owns Dungannon Village. GHK Cape Fear, the development arm of Cape Fear Commercial, is managing the development of the building, said Brown, who is also a partner in GHK Cape Fear. Thomas Construction Group is the builder, and Becker Morgan Group Inc. is the architect.

"What’s leftover [in Dungannon Village after the Sea Coast Advantage lease] is 7,200 of square feet of retail and office space. We’re working now to fill that with some smaller tenants that would hopefully be amenities to the neighborhood," Brown said.

At Barclay Commons, the office building where Sea Coast Advantage has leased space is across from Henry’s Restaurant and Port City Java. Sharon Laney will be the new broker in charge of the midtown office, supervising 35-40 Sea Coast Advantage agents. Upfit is expected to begin soon on space, the release said. Hill Rogers, broker in charge for Cameron Management, represented the landlord in the Barclay Commons lease.

“These two new locations are conveniently located, have plenty of parking and are easily accessible to buyers and sellers, as well as our Sea Coast Advantage agents,” Milam said in the release. “Right now, we have 11 offices and 450 agents from Jacksonville to Myrtle Beach and we are always exploring ways to expand our presence in the market areas we serve. The addition of these two new locations will help us better serve our clients and increase our visibility throughout the community.”

When Milam bought the company in 1997, the firm had one office and about 50 agents. Milam said Thursday that this year, the company is on track to do about $1.3 billion in closed sales volume, with $663 million in closed busines in the first six months of 2016 and 3,000 closings.

In 2015, Sea Coast Advantage had $1.2 billion in closed sales volume and more than 5,800 closed sales transactions, the release said.

"We have excellent real estate agents, staff and management," Milam said. "We’ve got a ton of builders and repeat clients who have worked with us for so many years."