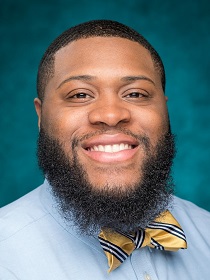 Najee Wise has been named the National Society of Collegiate Scholars Founding Chapter Advisor of the Year, according to a news release.

“As an academic advisor, I work diligently to enhance the educational experience for my students,” said Wise in the release. “To me, winning this award means that I have made a difference, and that I have made an impact on someone.”

The National Society of Collegiate Scholars is "a prestigious honors organization that recognizes and supports high-achieving students across the United States," stated the release.

The NSCS chapter at UNCW makes the university part of a network of 320 other colleges and universities.

Wise earned a bachelor’s degree in sports management at Wingate University and a Masters of Education from UNCW.

“Najee helped establish UNCW’s NSCS chapter as its advisor because he saw the opportunity to help students think about their major and career goals through the lens of a community of scholars,” said Christine Pesetski, assistant dean of undergraduate studies and director of University College, stated in the release. “By having an NSCS chapter at UNCW, we have joined a network of 320 other colleges and universities, and we have access to a network of community support."