By Christina Haley O'Neal, posted Nov 12, 2019
Tweet
Wilmington Downtown Inc. has been recognized for its work related to the OverFlo Hurricane Recovery Campaign. 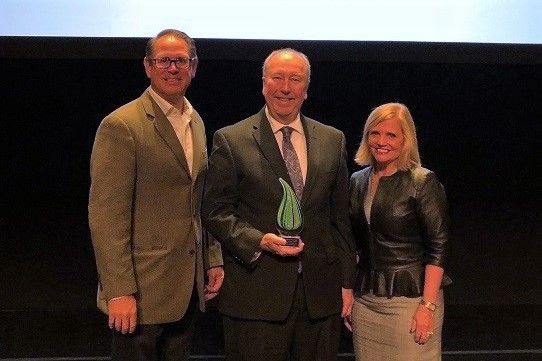 WDI received the Downtown Achievement Pinnacle Award (right) in the category of Leadership and Management from Washington, D.C.-based International Downtown Association (IDA), according to a news release.

The IDA recognizes projects as winners of the Downtown Achievement Awards, which "identify improvements to urban centers by dedicated organizations around the globe," stated the release. The Pinnacle Award is the industry's highest recognition.

“WDI’s innovative project received the IDA Pinnacle Award for setting the new standard for improving cities worldwide,” said David Downey, IDA's president and CEO, in the release. “The OverFlo Hurricane Recovery program has made an impact on its city and the people who live, work and play in the community, and demonstrates the continued commitment to champion livable, vital and thriving urban centers.”

The OverFlo Hurricane Recovery Campaign started as an effort to prepare and respond to Hurricane Florence in September 2018.

Post-storm, the campaign turned into a monthlong marketing and special event program to communicate that most downtown businesses were open, as well as raise money for nonprofits. The campaign raised and donated more than $137,000.

“Being selected as a top project in the world is a prestigious and humbling honor,” said WDI President and CEO Ed Wolverton in the release. “Our OverFlo campaign engaged the community and the region in a meaningful way during a time of crisis and was only possible because of the dedication and involvement of dozens of volunteers, the WDI Board of Directors, WDI staff members and Downtown business and property owners."