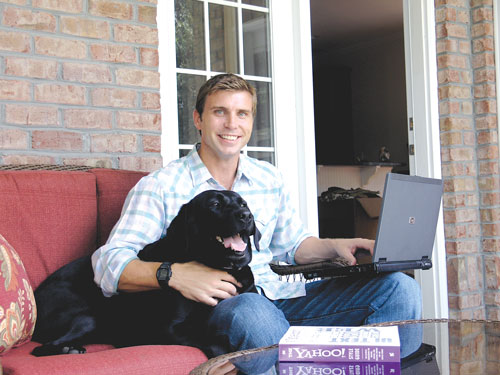 Sitting quietly in a corner of Port City Java, Jamie Mottram looks no different than any other coffee drinker tapping away on a laptop. With earphones and dark-rimmed glasses, eyes in constant motion, Mottram is anonymous. His work, however, is not.

Mottram is the managing editor of blogs for Yahoo, the No. 1 site with original content on the Internet. As Mottram clicks and types, his decisions affect the content more than 30 million people view every day. And for more than three years he has called Wilmington home.

“I could work from anywhere and always wanted to live at the beach,” Mottram said. “It was a combination of the allure of the beach, liking downtown, and affordability, so we made the move. There was not much downside.”

“He’s an example of the types of people we want to attract here,” said Sallie Smyth, the programs director of Cape Fear Future, an initiative to grow the knowledge sector of the local economy. “He’s definitely sort of the poster boy for many different sectors. We are always looking to engage innovating new entrepreneurs.”

Mottram and his wife moved to Wilmington in 2008, and their 2-year-old daughter Elynor was born at New Hanover Regional Medical Center. In October the couple is expecting a baby boy.

“Cities like Wilmington are only going to become more attractive as the world goes digital. Wilmington is unique because of the huge creative community,” Mottram said.

“Walking around downtown, you can forget you’re in the South and almost feel like you’re in a borough in New York. Combine all the college students, artists, hipsters, the convergence of all these things makes it more and more attractive to virtual and online workers. Digital work will continue to increase, and attractive places will attract those workers.”

Mottram left AOL for Yahoo in the fall of 2007; at the time Yahoo was the second-ranked Internet source for sports, behind www.espn.com. Today, with Mottram on board, Yahoo is the No. 1 destination for sports on the web, outranking ESPN the last 30 months.

“Coming to Yahoo, I felt like I could recreate, make it better and work on a much larger scale. I had a good thing at AOL, but I think

I had a potentially great thing at Yahoo. The blogs didn’t build the entire audience, but blogs put them over the top,” Mottram said.

“More than anyone, Jamie understands what works on the Internet,” said Dan Steinberg, a popular blogger at The Washington Post.

“If you want a model of how to create something successful on the Internet, just do what Jamie is doing.”

Yahoo agrees. Last year, Mottram was promoted to managing editor of blogs, placing him in the driver’s seat of a growing media colossus. Yahoo is expanding original content to include news, politics, entertainment and finance, with Mottram and former LA Times editor Dave Morgan overseeing the expansion.

Morgan, the executive editor for North America, hired Mottram at Yahoo. Morgan calls Mottram, “a huge asset. In addition to what he’s already done at sports, he’s still got quite a lot on his plate. The main thing is he is a very valuable partner in what we’re building.”

Mottram’s quantifiable impact on Yahoo is staggering. Yahoo.com is the fourth ranked web site in the world according to Alexa rankings. In the first quarter of 2010, Yahoo made more than $1.5 billion. Yahoo is now the No. 1 news site in the country and display advertising has increased more than 20 percent.

For now, Mottram has no plans to open an office in Wilmington or hire a local workforce. In time, he could see that happening, but for now his staff works all over the country.

Embracing his new home, Mottram has taken up surfing and can be found early mornings in the surf at Wrightsville Beach. Sporting a two-inch scar on his left bicep, Mottram proudly tells the story of riding a wave in a changing tide. His board spiked nose-first into the sand, and the back end of the board shot back, directly into his arm, opening up the gash. “I could never do that back in D.C.” Mottram said with a smirk.

He sees his future in Wilmington, despite one complaint. Frequently Mottram needs to travel to New York or Los Angeles, and the lack of flight options leave him wanting.

Though flights to the West Coast may be lacking, Mottram is happy with his decision to move to Wilmington. He and his wife have tripled their square footage for the same cost as their one-bedroom condo in Arlington, Va.

“We think it’s a great place,” Mottram said. “We don’t know much about the schools since our kids are so young, but, in general, Wilmington is a great place for kids.”

Like that, with the eyes of millions around the world engaged in a digital world of his creation, Mottram focuses his eyes back on the computer screen. Other patrons glance by, not noticing perhaps the most influential man in Wilmington. Nobody does. Yet.