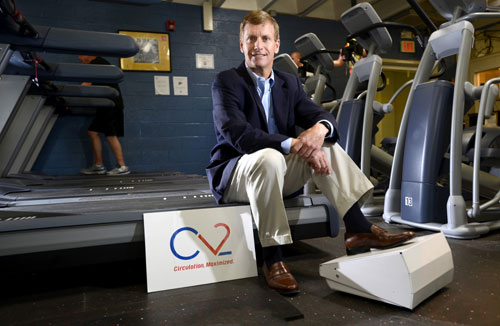 GO2 LLC cofounder Jim Hundley Jr. (File photo)
A late-stage startup in Wilmington has received a $75,000 award from Innovation Fund North Carolina in tandem with the Kauffman Foundation. The grant was announced this week, according to a news release.

The grant process was competitive, according to the release, with 59 applicant companies. GO2 was one of two $75,000 winners in the later stage startup category and five in the early stage category, each of which received a $25,000 grant.

GO2 LLC – founded in 2010 by Jim Hundley Jr. and his father, James, a retired orthopedic surgeon – manufactures and sells the CV2: a non-invasive, low-resistance medical device the company says helps increase blood flow and reduce pain and swelling in the lower extremities of the body. It’s designed for people with poor circulation.

Hundley said in an interview earlier this year that 68 million Americans suffer from conditions with symptoms that the CV2 can alleviate. These conditions include chronic venous insufficiency, deep vein thrombosis, restless leg syndrome, edema and peripheral arterial disease.

The company distributes the device through its website as well as through pharmacies and home and medical equipment suppliers.

“This award is a major boost for us,” Hundley said in the release. “Not only are we grateful for the funds and mentoring, but the validation this brings to our company is most encouraging.  Building a company is very difficult and the confidence so tangibly demonstrated by people, and organizations like this, along with our investors, means more than you can imagine.”

GO2 offices are in the University of North Carolina Wilmington’s Center for Innovation and Entrepreneurship facility at 803 S. College Road.

The Kauffman Foundation, based in Kansas City, Mo., is among the largest private foundations in the U.S. and awards grants in the areas of education and entrepreneurship, its website states. Innovation Fund North Carolina, a pilot project of the Kauffman Foundation and Innovation Fund America, is led by Catawba Valley Community College and aims to give technology startups in North Carolina the resources necessary to become thriving businesses, according to its website.