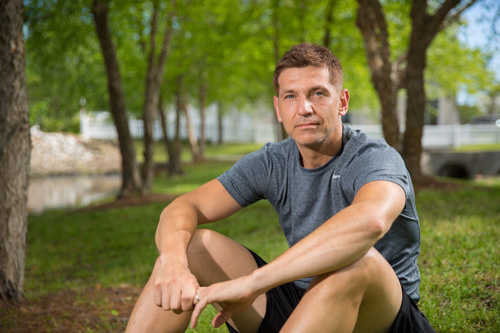 Todd John, founder/president | Year Founded: 2007 | No. of Employees: 8 (Photo by Chris Brehmer)
Since first winning a Coastal Entrepreneur Award in 2013, Todd John and his company, PlayerSpace, has grown by leaps and bounds – a fact that led CEA judges to recognize the tech company again this year.

“What we said was going to happen in 2013 has happened, and every exercise has led to a bigger and broader story to tell today,” John says.

Just four years ago, John’s Wilmington-based company had not yet begun to identify its market niche. Now, John said, it is “the largest provider and clear market lead” of sports program management software and the only provider of swim lesson management software to YMCAs across the country.

“The entire YMCA swim curriculum is loaded on our app, and swim instructors just have to tap the skill when a child accomplishes it, and parents can use it to sign up for subsequent lessons,” John said.

The success John and his team of eight at PlayerSpace have achieved is a result of a great deal of hard work, long days and many highway miles.

He was able to fund PlayerSpace by working as the COO of a real estate tech firm in Greensboro. For four-and-a-half years, John drove to Greensboro on Mondays to work his regular eight-hour day at his paying job, then he’d work an additional seven hours building PlayerSpace, then he’d come back on Thursdays.

“I literally was working two full-time jobs so we could take a different approach than many of our competitors who used venture capital firms to fund their companies, whereas we are primarily self-funded,” he said.

John left the real estate tech firm in 2012, but it was not without taking a leap of faith built upon the strength of others.

“It was a lot. It takes everything you possibly have, and you don’t even know what you have until after you’ve been through it,” John said. “I went from a steady paying job to almost zero income. I couldn’t have done it without a lot of support and sacrifice from my family.”

John said the “floodgates” opened for the YMCA market, and now PlayerSpace is “doing transformational things with the largest recreational sports market in the world.”

“Today it’s a full-time job, and I still put in many, many hours. Eight-hour workdays don’t exist in this world, but I’ve never been happier,” John said.

PlayerSpace uses all of its own tech resources to code and develop its exclusive technology platform and mobile app. The company shares the market with mega-organizations that include Blue Star Sports now owned by Genstar Capital that includes investment from Dallas Cowboys owner Jerry Jones, Dick’s Sporting Goods, Sports Illustrated, and NBC Universal.

“We’ve somewhat enjoyed flying below the radar to date as there are only a few of us private companies left. However, the mega companies that have spent a lot of resources in the past three years consolidating our industry definitely know who we are,” John said.