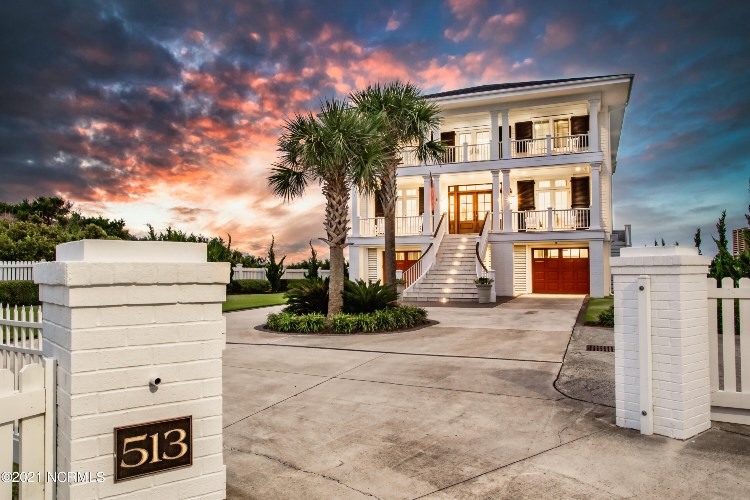 The sale breaks the most recent New Hanover County record, based on N.C. Regional Multiple Listing Service data, that was set in May.

The nearly 4,500-square-foot, three-story home on a 74-foot-wide lot sold Nov. 30 and was only on the market for a week before going under contract. Many oceanfront homes are on 50-foot lots.

"I think it's very interesting and reassuring to see local people stepping up and buying these properties," said Vance Young, of Wilmington-based Intracoastal Realty Corp, who was the listing agent.

The buyer was CMaid LLC, an entity organized by Neill Currie, and the seller was Carol and Vernon Grizzard of Chattanooga, Tennessee, according to the deed and state records.

"We are absolutely a great value when you look at the bigger picture, and you include communities like Kiawah outside of Charleston, South Carolina, and Sea Island, Georgia," Young said. "And then on the Florida coastline, both the east coast and the west coast are significantly higher priced than we are."

Young pointed out that 516 luxury homes, defined as those priced at $1 million or more, have sold in the tri-county region of New Hanover, Brunswick and Pender counties so far this year, compared to 382 for all of 2020, a 35% increase.

The sale at 513 S. Lumina marks the third time this year, and the fifth time in a year and a half, that a real estate transaction has broken the record for the most expensive home ever sold in New Hanover, according to a report released Wednesday by Just For Buyers Realty.

“What’s amazing to me is not the new record, but the clip at which these records are being broken over and over again,” said Scott Saxton, agent at Just For Buyers Realty, in the report. “For 15 years, the record high residential sale in New Hanover County never changed, but starting late last year, we’ve seen the record broken five different times. To me, that is the ultimate sign of what an incredible year it has been.”

The most expensive residential sale in the region as a whole has been on the books since 2012, when a home on Bald Head Island in Brunswick County closed for $9.7 million, the report stated.

Current buyers of local luxury homes are local residents; another third is made up of in-state buyers, primarily from the Triangle area; and the other portion are mainly from the Northeastern U.S., although Realtors have seen buyers from California, Oregon, Texas and Florida.

"We are now on the national radar I think for the first time in our history," Young said. "And a lot of that is the result of COVID encouraging people to work from home. It's also a flight from the metropolitan areas with concerns about crime and high taxes."

November was the 18th consecutive month when luxury home sales in the tri-county area saw increases in year-to-year sales, according to the Just For Buyers report.

Forty-five homes with a price tag of $1 million or more sold during November this year for a collective value of just under $73 million, compared to 43 in November 2020 for a total of $72.5 million, the report stated.

“The only way to interpret the pending figures is to say that things are going to slow down, maybe not next month but sometime,” Saxton said in the report. “But saying things will slow down is a long way off from saying the bubble is bursting. We are still in a very active and competitive market. That is true on the luxury level and it is true at all price points.”