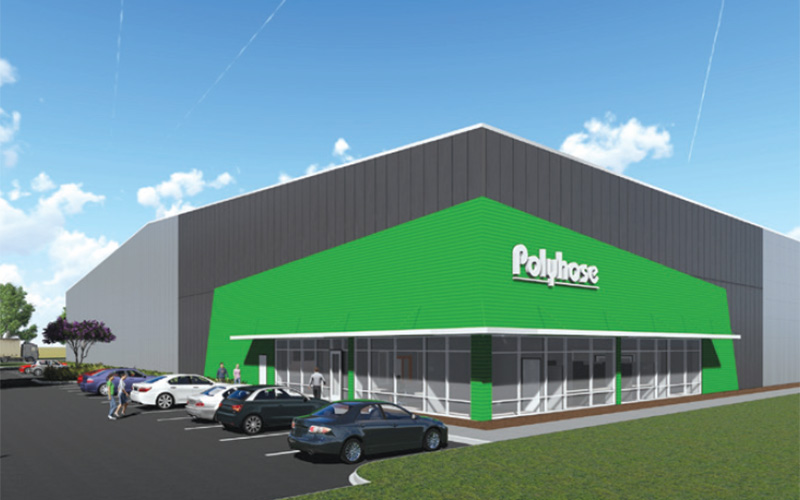 Economic developers have a clear impact on the Wilmington region connecting the area to potential job creators and new companies. While not in the selection pool for the WilmingtonBiz 100, their efforts, however, bear significance and are included in this roundup.

While there were no new major industry announcements for the Cape Fear region this year, big projects announced in 2019 made headway.

India-based Polyhose Inc. had a delay due to the pandemic on the start of its new North American headquarters building in the Pender Commerce Park. But work on the new 52,500-square-foot facility (rendering shown above), which will house the firm’s warehousing and hose assembly, has begun, said Jonathan Pressler, the firm’s senior vice president.

Polyhose aims to be operational in the space by spring, with plans to invest roughly $8 million and create about 51 jobs in the coming years.

The Navassa operation of Pacon Manufacturing Corp. created at least 110 jobs after its startup in spring of this year, Bill Early, executive director of Brunswick Business and Industry Development (Brunswick BID), said in November. The firm plans to eventually move its operations from New Jersey to the Navassa location.

There were $1.3 million in state and local incentives approved this year for Pacon, which has pledged to create 299 jobs and make a $37.6 million investment over several years.

The already-established Brunswick County manufacturer HSM Machine Works, which makes landing gear for the aviation and aerospace industry, was also approved for a $100,000 state grant that could help boost its infrastructure and would allow the firm to create an additional 17 jobs and invest $150,000.

WBD was a partner in bringing two speculative building developments – one completed and another in planning – to the Pender Commerce Park that will open up more than 300,000 square feet of space.

Additional inventory has been added as the former Vertex Rail Corp. site on Raleigh Street, being marketed as Wilmington Business Park, has come online. The property is up for lease.

Brunswick BID has partnered to bring in the necessary infrastructure, including water and sewer and fiber internet lines, to two large megasites: the Mid-Atlantic Industrial Rail Park and International Logistics Park of North Carolina. Developers are planning a 150,000-square-foot spec building, expandable to 330,000 square feet, at the International Logistics Park. That project is slated to come online sometime next year.

In Leland, town economic developers helped facilitate the annexation of more than 200 acres of the Leland Innovation Park and implemented at the park a new type of industrial zoning, the innovation zoning district, which can also be used in other parts of the town.

Local groups Brunswick BID and WBD, along with N.C. Southeast, an 18-county regional economic development group, have also worked to push more of its marketing efforts and inventory online, as well as take recruitment efforts into a virtual setting due to the pandemic constraints to business.