By Johanna Cano, posted Oct 8, 2020
Tweet
In 2000, the then-named Wilmington Regional Association of Realtors held its first Tech 2000 Expo. In attendance were vendors that sold tech gadgets such as lightweight laptops; handspring computers described as “hand-held computers” and add-ons that allowed consumers to speak to sales representatives while browsing a website.

Technology articles from the year 2000 range from pieces on whether phone booths will disappear to how schools are utilizing technology to launch online classes. They also highlight local tech businesses that were innovating in an emerging field.

While technology continues to evolve, so has the types of startups launched in the region and the way entrepreneurs connect to resources.

Some of the current tech frontrunners in Wilmington include nCino, a banking software company that began trading with skyrocketing IPO launch-day numbers valuing it at $7 billion; NextGlass, which received a strategic investment to grow its software that connects those in the alcoholic beverage industry, and PlayerSpace, a sports management software firm purchased for an undisclosed amount by Daxko.

One startup looking to become Wilmington’s next success story is SportGait.

Headquartered at the Center for Innovation and Entrepreneurship at UNCW, SportGait has developed technology and a platform where parents, athletes, coaches and medical providers can monitor concussion symptoms in athletes.

“The first thing that we did was put together a terrific team and their expertise has let us be able to make some great achievements in such a short period of time,” CEO Chris Newton said about the process of launching SportGait from an idea to a formal company.

Besides Newton, SportGait is led by executive chairman Tobin Geatz, who is also founder of Seahawk Innovation.

The company has a relationship with the University of North Carolina Wilmington.

“We’ve been working hand-in-glove with the psychology department, and they’ve helped us quite a bit on the clinical side of things,” Newton said.

The startup has previously received investment from Seahawk Innovation, an organization with a public-private relationship with UNCW, making the university a part owner of the startup. 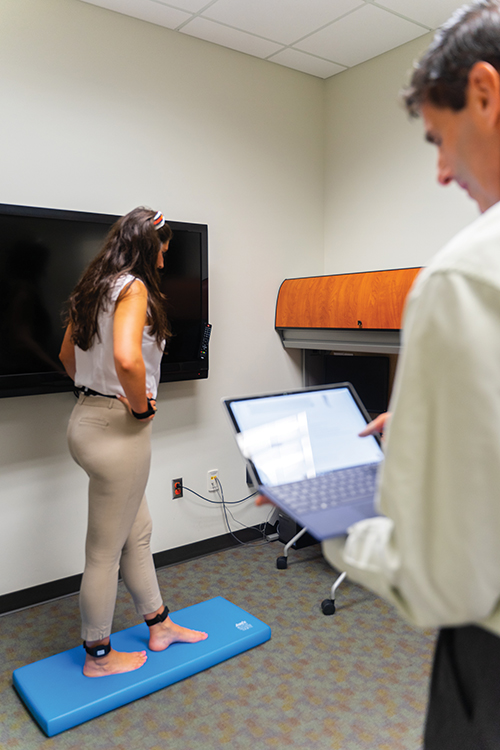 SportGait, an entity of LifeGait Inc., has raised $2 million through investors, according to filings with the Securities and Exchange Commission. LifeGait, which holds intellectual property for SportGait, has raised about $1.4 million.

Newton said the majority of the investment SportGait has received is local.

One aspect of the company that has helped its growth is that it is solving an important problem, he said.
“The first thing you need is a clear value proposition that addresses a very large need or a problem, and I think we successfully did that,” he said.

Newton, who came to Wilmington from the Triangle region, said growing the company in the Port City has been helped by area support for entrepreneurs and startups. But having more companies start and grow in Wilmington would boost that entrepreneurial ecosystem.

“Wilmington is a great community for startups and high growth. I’d like to see more technology-focused companies to make the environment bigger, stronger and attract more technical talent into the area,” he said. “We need a couple to take the risk – to start and to grow – and we need more downstream investment that is local.”

Supporting the growth of the entrepreneurial landscape in the region has been the primary goal of some local organizations including North Carolina’s Small Business and Technology Development Center, which established a local office in 1986.

Some resources sprung up after the year 2000, including tekMountain, an incubator and coworking space founded in 2014 by CastleBranch.

“In Wilmington, one of our biggest attractions to draw entrepreneurs and startup companies is the beach. But you can’t build businesses from sand,” said Brett Martin, CEO of tekMountain and founder and CEO of CastleBranch, which started as a background screening company in offices at The Cotton Exchange in 2002 and now owns its headquarters buildings on Sir Tyler Drive where it has moved into other online platform services. “If you’re going to attract entrepreneurs, you need to go beyond the beach and have the right mix of ingredients – knowledge, network and capital.”

At tekMountain, startups can gain the knowledge they need to grow, the networks they need to scale their business and the learnings and resources they need to find and create capital, Martin added. 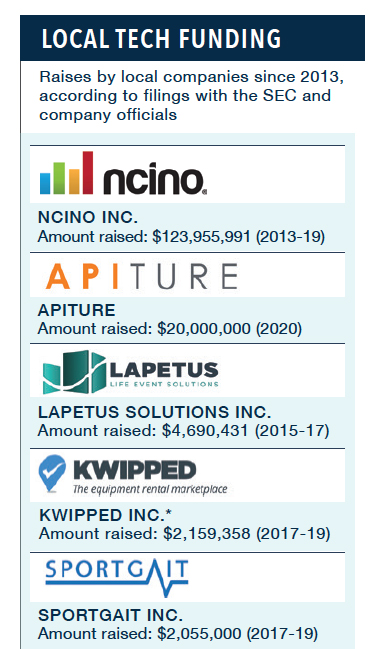 With a community of 150 “co-workers,” members can connect with other companies, mentors and experienced entrepreneurs.

Currently, the COVID-19 pandemic has prompted tekMountain to shift to a virtual mode, with its physical space closed for the foreseeable future.

Many tekMountain-based startups have grown and graduated out of the space and into their own, including SWELL Systems, BarMembership and Connected Investors. Others have also won awards, including tekMountain-affiliated companies receiving NC TECH awards and Coastal Entrepreneur Awards.

Another notable source for many startups in the region is the UNCW CIE.

“We have been a resource for young, fledgling startups in early stage, so a lot of what we have done since we opened our doors is entrepreneurial education,” said Laura Brogdon- Primavera, manager at the CIE.

The CIE was formed in 2012 as a regional economic development organization focused on using entrepreneurship as a catalyst for the growth of jobs, innovation and new ventures, said CIE director Diane Durance. 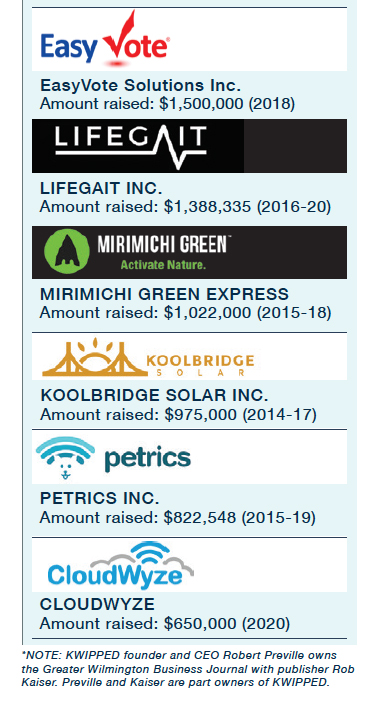 While the CIE is part of the university, serving faculty, staff and alumni, most of the tenants aren’t affiliated.

“Most of our entrepreneurs come from the community, and in fact, out of the 100 or so entrepreneurs that we’re working with at any given time, only about five of them are from the university,” Durance said.

The CIE is a membership organization with working space for tenants including conference rooms and private offices.

“Over the last seven years we’ve seen growth in working with larger partners with funding support to help provide that accelerator funding,” Brogdon-Primavera said. “That has been a new addition that we’ve been able to offer young startups to help them reach milestones.”

That includes hosting information sessions on grants through the NC IDEA foundation, which supports entrepreneurs throughout the state and cofounding the NC Bioneer Venture Challenge.

While the CIE has been able to provide resources to entrepreneurs in the region since 2012 on its own, it is part of a larger group that can fill gaps and provide a full spectrum of services and resources.

“When you look at the coalition of organizations in the region that support – from the SBTDC to tekMountain to Genesis Block to Small Business Administration – everybody has their niche, the thing that they’re really good at and how they’re a differentiator,” Brogdon-Primavera said. “But when you put us all together, it makes us a pretty impactful and significant group to want to start your business in Wilmington.”

To highlight all the services from local organizations aiming to help businesses and entrepreneurs, the CIE is working on a new website called Engagement Hub.

“Users will be able to see not only the events that we’re offering but all of the programs and ways that we can support them through this E-Hub,” Brogdon-Primavera said. “It also will highlight the differences in all of the organizations in the region.”

One resource founded this year aims to not only promote entrepreneurship and the tech industry in the region but specifically minority entrepreneurs and startups.

The brainchild of husband-and-wife team Girard and Tracy Newkirk, Genesis Block is a coworking space in downtown Wilmington born out of the desire to boost entrepreneurship and the technology sector.

“I always had a dream of bringing technology and entrepreneurship to the Cape Fear region.” Girard Newkirk said. “Genesis Block for me is a concept with a focus on the community and helping out small businesses and early-stage entrepreneurs.”

Tracy Newkirk said the desire to establish an incubator and accelerator came out of wanting a Wilmington where her sons would want to live, grow, work and raise a family. 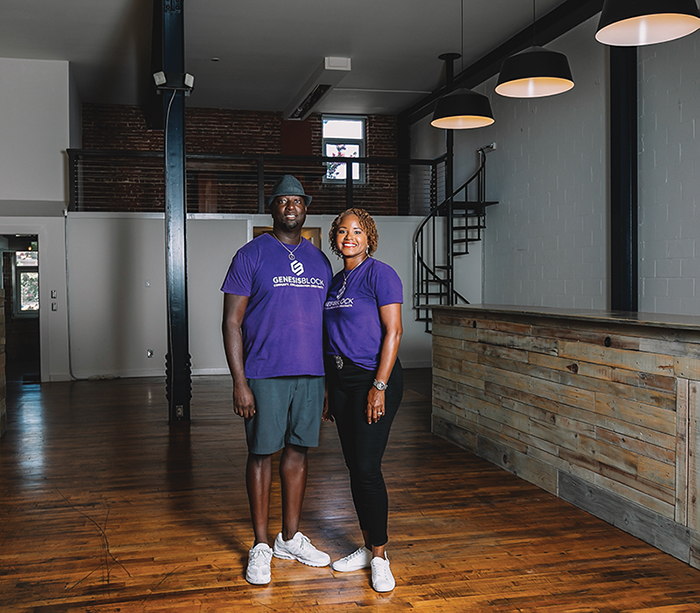 “I started with African American Business Council and then when Girard and I got together and he told me what his vision was and what mine was, it was just a perfect fit,” she said. “What greater way to raise up a strong, not just African American middle class but a strong business class in our community, than helping entrepreneurs?”

Besides private offices and coworking spaces, Tracy and Girard Newkirk (shown above) worked to create an environment for collaboration, as well as offer seminars, workshops and classes.

“We’re building out the Genesis Block incubator and minority accelerator, and all of these programs are going to be focused on getting businesses investor-ready and also having the tools and the resources to scale their businesses,” Girard Newkirk said.

Both with experience owning businesses, they wanted to provide a space for entrepreneurs from all backgrounds, especially minorities that historically have less access to resources.

“Tracy and I are minority entrepreneurs, so we see some of the challenges directly,” Girard said. “We see that that’s a major opportunity in the Cape Fear region especially with some of the gaps, as far as minority supplier contracts, whether it be at the public level on the private level.”

To address those issues, Genesis Block is working on a mobile app to help individuals, businesses and government institutions find and support Black-owned businesses in the community.

“I think the opportunity now is to develop clear pathways so that entrepreneurs understand what resources there are to get formalized as far as how we get them in that pathway and on a clear track towards becoming a success,” Newkirk said.

Looking into the future, showing other communities that the Wilmington region can be a destination for technology innovation and entrepreneurs is key for continued growth, Martin said.

Additionally, Brogdon-Primavera said the community needs more mentions of companies getting to the next level to continue on a good trajectory.

“Next time we have another nCino success story, hopefully, that’s not going to be our last,” she said. “We need champions telling that story and screaming it from the mountaintops.”