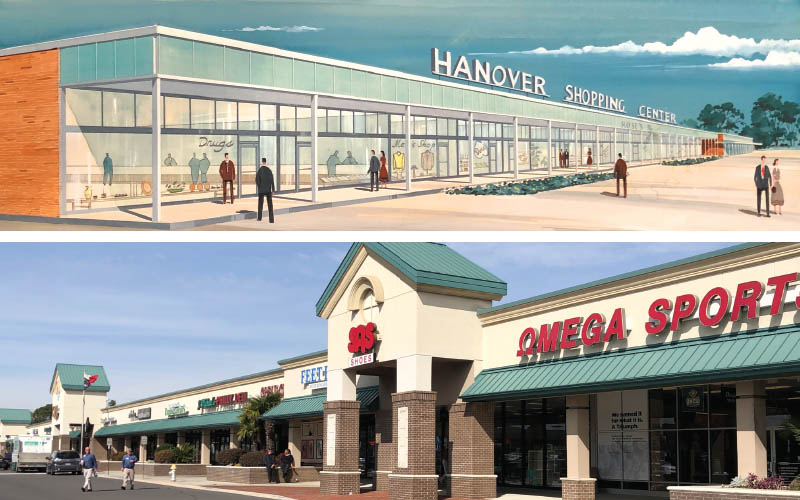 A 1950s-era rendering by John Baer for Alexander S. Cochran Associates Architects of Baltimore shows Hanover Shopping Center in Wilmington (above.) Hanover Center, as of January 2020 (below.)
At Hanover Center in midtown Wilmington, updates top the shopping list for the property’s new owners.

Within the next year to 18 months, patrons can expect work to be done on a new facade, along with a new entrance sign and improved parking lot, said Randy Kelley, principal of Harbour Retail Partners who is based in Wilmington.

In December, Hanover Center changed hands in a $51 million deal through which Preferred Apartment Communities Inc. (NYSE: APTS) made an approximate 92.5% equity investment in a joint venture with Harbour Retail Partners.

Anchored by a Harris Teeter grocery store, the Wilmington landmark at 3501 Oleander Drive measures more than 300,000 square feet and has been owned for more than 60 years by the MacRae family, developed by Hugh MacRae II and opened in 1956.

In addition to improvements, the new owners plan to build 264 apartments, along with office and retail space, on 7 acres behind the center.

And the changes aren’t likely to stop there.

“We'd like to add another outparcel on the Independence Boulevard side,” Kelley said. “We've got a couple of tenants that we're talking to so we may end up building either a single tenant or a multitenant building on Independence.”

New restaurants could be on the way.

He said existing tenants at Hanover Center do very well.

“I think it’s because of the location,” Kelley said. “The location is just irreplaceable real estate, and you’ve got proven traffic at this intersection (Independence Boulevard and Oleander Drive) and at this center.”

Over time, if existing tenants leave, “we’ll be working really hard to try to bring more experiential retail to the center, which for us would include restaurants.”