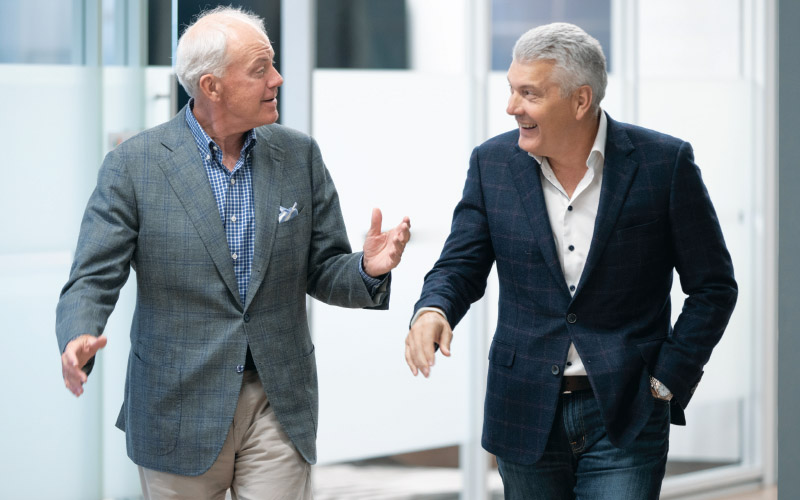 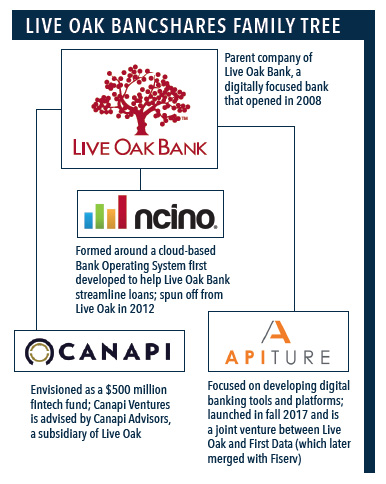 The latest developments in the company that spun out of Live Oak Bank in 2012 mark the two Wilmington companies’ continued toehold into the financial technology world, growing their presence both in the Port City and in the industry at large.

Along with nCino CEO Pierre Naudé, Mahan and several other business leaders who can trace their roots somehow to Live Oak (Huntley Garriott, president of Live Oak Bank; Neil Underwood, partner at Canapi; and Chris Cox, president of Apiture) are included in the inaugural WilmingtonBiz 100 group this year for what they have built and are continuing to build upon in the fintech space.

The Japanese presence represents nCino’s first foray outside the English speaking world. Its other international offices are in London, Sydney and Toronto. With a Tokyo office, nCino commits to providing financial technology to customers in very different cultures.

And nCino’s incorporation of artificial intelligence and machine learning into its system through nCino IQ (or nIQ, for short) adds further sophistication to its financial technology offerings.

“nIQ uses artificial intelligence and machine learning to increase efficiency through automation and provides insights through analytics to improve the overall customer experience,” Naudé said. “With this product expansion, we’re evolving the concept of an agile enterprise further to that of the ‘Intelligent Enterprise,’ where AI is injected into every stage of production and stands at the center of every business line we support. Our view is that these tools can improve the overall customer experience and help financial institutions become more predictive, personalized and proactive.”

nCino’s announcement of nIQ stated that nearly two-thirds of financial institutions cite increasing operational efficiency as their top priority over the next one to two years.

Mahan was an early advocate of electronic banking. In 1995 he founded Security First Network Bank, the first  purely internet bank in the U.S.

Mahan and a small group of colleagues understood the potential power of an all-digital bank that would use technology to streamline small business lending, so in 2006 they decided to launch such an entity. Choosing the quality of life available in Wilmington over the more hectic lifestyle of Atlanta, they opened Live Oak Bank here in 2008.

Driving the success of Live Oak Bank was a business model that focused on niche industry lending and the development of a proprietary banking software product to allow Live Oak to lend efficiently across the country and to monitor – and sometimes advise – its borrowers. Perhaps before people even used the term fintech, the Live Oak Bank team had a vision for how streamlined technology systems could power banking processes. Their beliefs have been borne out.

“We are at a point in time where banks, who are highly regulated, must become more nimble and address customer needs in a much better fashion,” Mahan said. “We believe fintechs create nimbleness, but they  also must understand the discipline of regulation.”

Today, Live Oak Bank is the city’s only publicly traded company, (Nasdaq: LOB), with a market capitalization of about $736 million in late November.

In 2012, bank leaders spun off Live Oak’s software product into a new, separate entity, which they named nCino (shorthand for encino, Spanish for the live oak tree). They brought Naudé in from S1 Corp. to head up the new company.

The infant financial technology company had a comprehensive vision from the outset, according to Naudé.

“When we started nCino, there were just five of us in a borrowed office at Live Oak Bank, but we put up a sign on the wall that said ‘The Worldwide Leader in Cloud Banking’ to have a constant visible reminder of our vision,” he said. “For us, it was not a question of ‘if’ but rather ‘when.’

“Our vision and mission have remained the same: to be the worldwide leader in cloud banking and transform financial institutions through innovation, reputation and speed. Our commitment to those remains steadfast.”

SunTrust Bank’s Wholesale Banking segment, which adopted nCino’s Bank Operating System in 2017, has benefited from the system, according to Sandra Spiers, city president and commercial relationship manager for SunTrust Bank in Wilmington.

“nCino enables the entire relationship management team to share information seamlessly in order to facilitate faster decision making and ultimately deliver the capital they need faster to enable them to focus on running the business,” she said. “nCino also gives SunTrust the ability to quickly adapt the technology to changes in market conditions, regulatory changes and changes to internal business process.”

Just a few years ago, one of nCino’s challenges was to convince potential client banks that moving their data to the cloud was safe and beneficial. Now, with widespread acceptance of cloud-based data storage and the rapid advancement of financial technology, the challenge is to keep abreast of – or preferably ahead of – financial institutions’ evolving needs.

It’s a rare bank today that does not offer online and mobile services to its customers, said Chris Cox, CEO of Wilmington-based Apiture. Now, he said, the quest for banks is to “cater to the unique needs of their unique customer base.”

Apiture, a fintech company that formed two years ago as a joint venture between Live Oak and First Data Corp., develops products aimed at helping banks tailor their digital products and services. Since then First Data merged with Fiserv. Live Oak officials say they are looking for a new partner to replace them since Fiserv isn’t in the business of holding minority stakes in businesses, Mahan said during LOB’s third quarter earnings call this year.

Financial institutions in what Cox terms today’s “mature (tech) market,” are having to constantly adjust their digital strategies. One reason is because banking customers’ expectations for how they conduct business transactions online or through mobile devices keep evolving.

Another reason that the demand for new fintech will continue, according to Cox, is due to the increasing competition to traditional banks and credit unions from data companies and that fintechs themselves that are moving into the realm of banking services.

“(These tech companies) are taking little bits of the chain and can often provide services better than the financial institutions can themselves, because (the techs) are focused on specific products or services,” he said.

Live Oak Bancshares’ involvement with founding Apiture resulted from the banking company’s continuing certainty that technology is an essential underpinning for the financial services industry.

“Fintech investments are vital, and without them, banks will ultimately fail,” Mahan said. “The challenge is getting fintechs the capital they need rapidly enough to move at the speed banks need them to innovate.”

A bank’s investment in financial technology companies can be tricky, however, Mahan added.

Apiture is not Live Oak’s only fintech involvement. In February 2018, the company announced its Live Oak Ventures unit had rebranded as Canapi Inc. and would invest in companies that supply banks and credit unions with innovative technology. It has enrolled several other banks as partners in the investing entity.

“Canapi has the mission to partner with and invest in companies that provide new platforms for the banking industry,” Live Oak’s release stated at the time.

Asked about the current status of Canapi’s activities, Mahan said recently that it’s still early days for the startup.

“Canapi will aim to invest in next-generation fintechs to provide solutions and efficiencies to the banking industry,” he said. “It’s a changing world, and we believe our investments will ultimately create the next generation financial institution other banks will model.”

How has Live Oak Bank’s decision to locate its fledgling disrupter bank in Wilmington played out?

Live Oak now employs more than 500 people and recently completed its third office building on its Tiburon Drive campus. The bank remains the top SBA 7(a) lender in the country in terms of loan value but has moved also into other government-backed loan programs and offers financing to businesses in more than 30 industries.

In just two years, Apiture’s Wilmington staff has grown to 135. It has 45 additional employees in its Austin, Texas, office. In October, it moved from downtown Wilmington to space at the Live Oak campus.

nCino now employs over 800 people globally and occupies more than 130,000 square feet of office space in a Mayfaire office park. The fintech has raised roughly $230 million since its founding and is valued at more than $1 billion. It’s finding recruitment of new talent increasingly easy, according to its CEO.

“Being a technology company outside the tech hubs like Silicon Valley, Seattle and Austin continues to be advantageous for several reasons. Wilmington is an ideal place to recruit talent,” Naudé said. “This year alone, we’ve had 10,000 people apply for jobs at nCino, and we’ve hired just over 200. I would say that we are still doing very well being based in Wilmington and are proud to call this city the home of our worldwide headquarters.”

Chip Mahan and Pierre Naudé are both included on this year’s WilmingtonBiz 100 in the Power Players category. Read more about this year's honorees by clicking here.