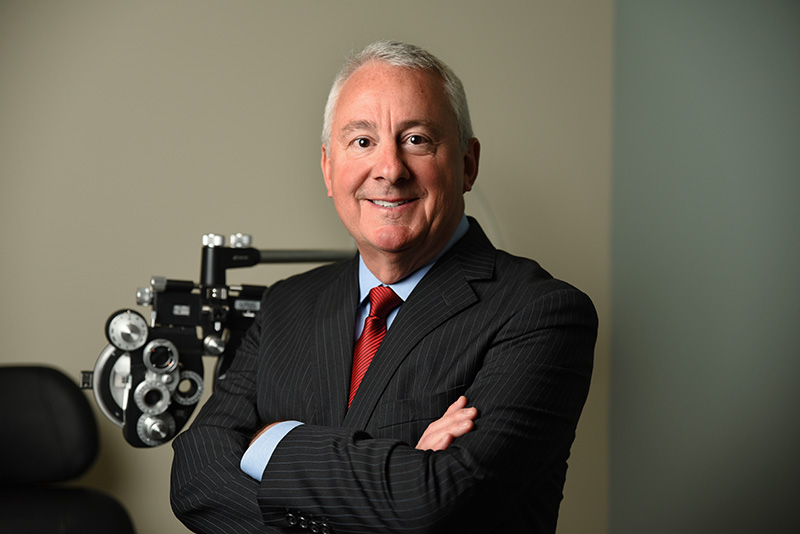 (Photo by Michael Cline Spencer)
To continue innovating in the field of eye care, optometrist Ed Paul has narrowed his focus.

Paul treats patients with vision loss resulting from a variety of causes, but most have age-related macular degeneration (AMD) – by far the largest cause of vision loss.

AMD is a disease Paul calls the “silent stealer of vision.” He cites the National Eye Institute’s statistic that about 11 million people in the U.S. suffer from this degeneration of their central vision.

“Macular degeneration is the leading cause of (vision loss) in Americans 55 and older,” Paul said. “In patients aged 75 or older, the prevalence of AMD is 35%, and it goes up from there. It is not a natural part of aging. Cataracts are natural.”

A problem in treating macular degeneration is convincing people to admit they have it.

“Many people live with it silently. People are very private about the diagnosis. They don’t want to be labeled, and they are afraid their kids will put them in ‘the home.’ When they lose their driver’s license, then fear sets in,” Paul said.

Paul, owner of Paul Vision Institute, has been a practicing optometrist for more than three decades. His practice is also a training facility for optometric interns/residents. Currently it is hosting one from Arizona College of Optometry and one from Southern College of Optometry, Paul’s alma mater.

Paul is active beyond caring for patients and training tomorrow’s optometrists. Equipped with a Ph.D. in nutrition, he has also developed two dietary supplements that address eye problems he sees daily.

The first is Tozal, which Paul launched commercially in 2010 to both prevent and treat age-related macular degeneration.

While other such supplements, familiarly termed “eye-vites,” are on the market, they at best slow the progress of macular degeneration, Paul said, while Tozal can stop progress in 23% of cases and restore some vision in another 56%.

To find the right formula, Paul spent a couple of years reviewing all the literature on the treatment of AMD through supplements.

“I would jot down all the elements identified,” he said. “I got a pharmaceutical company to sponsor my work, and that led to clinical trials at ophthalmology centers and U.S. medical schools. The trial placebo was the standard dietary supplement at the time. We got statistics on (patient) improvement.”

Those results were published in British medical journal BMC Ophthalmology.

Tozal, which Paul describes as a “super-rich dietary supplement that specifically addresses the causes we know” of AMD, has high levels of zinc. There is evidence that zinc deficiency could be a contributing cause of AMD.

“We followed patients for two years and found vast differences between the patients given Tozal and those given the placebo,” he said, adding that study participants were also given lifestyle counseling, encouraged to increase their physical activity, lower their consumption of fatty foods, combat elevated cholesterol and stop smoking.

The reason for those lifestyle and dietary changes?

Obesity, a sedentary lifestyle and Type 2 diabetes can make a person more likely to develop AMD, the optometrist said. So can smoking: A smoker runs a 300% higher risk of developing the disease, according to Paul.

“It’s a multi-faceted, complex disease,” he said, acknowledging that while lifestyle and diet changes can help patients, “the easiest thing to get a person to do is swallow a pill.”

Originally available only by prescription, in 2016 Tozal became available over the counter. And recently, Paul reformulated Tozal to reflect new research findings.

“Science does not stand still,” he said. “The formula I developed in 2014 was outdated. I added new nutrients, based on new bodies of evidence. For instance, we were using 80 milligrams of zinc; now we know that 25 milligrams is just as effective. The original form of Tozal had no vitamin D. We just learned that a vitamin D deficiency increases chances of AMD by 700%. When that research came out I had to put vitamin D in there.”

While declining to give sales figures, Paul said that sales of Tozal continue to top 20% growth each year.

To avoid potentially toxic levels of some vitamins in a patient’s system, Paul formulated Tozal with the assumption that the person was already taking a daily vitamin supplement.

Despite his emphasis on AMD, Paul’s newest product addresses what he says is a common – and growing – eye problem: dry eye. He has formulated a dietary supplement, O3+Maqui, that is now on the market.

“Maqui berry has been used for centuries to stimulate the eye’s ability to produce natural tears,” Paul said. “Omega-3 has been used more recently for dry eyes. I combined the two.”

Paul’s new product underwent a clinical study that used each element – maqui berry extract and omega-3 – separately and then as a combined formula.

His study was published in the Journal of Clinical & Experimental Ophthalmology.

“Two plus two did not equal four in this case; it was more like seven. The two elements are synergistic,” Paul said of the trial results. “I think this product will surpass Tozal in sales.”

Problems with dry eye are growing, according to the optometrist, because of the prevalence of air conditioning and chronic use of antihistamines by many people. Long exposure to dry ambient air and antihistamines – as well as lack of sleep – affect the eye’s mucous membrane.

As he did with Tozal, Paul selected a pharmaceutical company to manufacture and distribute O3+Maqui. He said delegating that part of the business to an established drug company that is experienced in working in a highly regulated environment frees him to continue doing what he does best: treating patients and working on new products.