New On The Scene 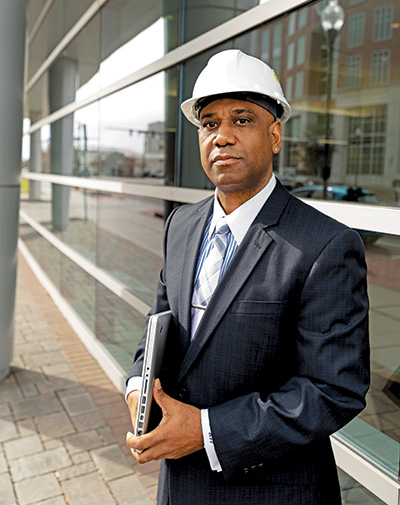 Ayize Glenn Gray grew up in the church. But not just any church. He grew up in the Greater Allen AME Cathedral of Jamaica, Queens, New York, which the Rev. Floyd Flake led from 1,400 members to 23,000. Flake also grew the church into one of the largest urban development institutions in the state.

Gray didn’t give this much thought when he was working in the church as a youngster. His mother and both grandmothers were very active in the church. Being there was just something he did, along with helping to care for the building and grounds.

As an adult, Gray realizes his winding path to commercial and residential real estate sales and development is rooted in his association with Flake.

“Floyd H. Flake, who is one of my mentors, had a vision to support the community through economic development. He did it by developing real estate,” Gray said. The church’s business manager, Howard Henderson, was also a real estate investor who purchased buildings and fixed them up for rental.

“He was able to get a bigger life and lived in Manhattan,” Gray said.

“Those early days … I know the seeds were planted for real estate development, economic empowerment and social justice.”

Gray’s mother chose to send him to high school in a more affluent part of the city, where he mingled with a more diverse population than in his neighborhood. “That opportunity changed my life. I had never been exposed to white children at that level. The students were mostly white and Asian.”

He was given the opportunity to participate in a co-op program that sent him to school two weeks followed by two weeks working for a corporation in Manhattan, and the cycle would start again.

“When I graduated from high school, I knew I wanted to explore and expand,” Gray said.

He majored in communications at Clark Atlanta University and became an intern in a film office. During his fourth year in college, he learned of the possibility of an internship in TV production and advertising for European companies operating in Nigeria. “I had dreadlocks and was into the Rastafarian movement” so the idea intrigued him. He was accepted into an internship at Smith Studios in Lagos. “It was a growing experience. I worked on presidential campaigns, flew in private jets of rich Africans, lived in the ghetto and traveled.”

Returning to New York after a year, he recalled how enthralled he had been on the film set in Atlanta. He connected with a friend working in the industry and gradually turned part-time gigs into full time as a production assistant.

From there he moved to location management in New York before moving to Los Angeles.

“I met with everyone I could. I took a couple of free internships, gave up income to begin again,” Gray said.

He said that led to a development job at 40 Acres and a Mule Filmworks, and co-founding of BUS Films. “Hollywood is interdisciplinary like real estate. You have to have a vision to see it through,” he said. “A lot of money gets spent before anything is real. At one point I had to use my own money to fund my projects, and it didn’t work out.”

Gray took the opportunity to reflect, to reconnect to his spiritual nature and to rebuild. During that time, he worked briefly as a mortgage broker. His first child was born during the economic downturn. “I decided to stay home and raise my daughter … Today I see the fruit and flowers of that time.”

He said he then took a serious look at real estate. With the seeds planted by his childhood mentors, he moved his family to Durham, where he dove into urban single-family refurbishment and infill projects.

“Real estate development allows me to express my desire as an entrepreneur, my ability to connect with people, to facilitate and connect transactions, to bring something to fruition. It’s a perfect fit for me,” he said.

While Gray was away from Durham on business, his wife, Jill, who grew up on the beach near Los Angeles, discovered Wilmington and its beaches. “She wanted to move,” he said.

They spent some time visiting, and he began networking “trying to get a grasp of what this place has to offer.”

While working on deals in both cities, he’s also attended the Urban Land Institute, and has been accepted to the Master of Real Estate Development program at Auburn University.

He said he’s excited about the leaders he has met here. Gray sees possibilities for projects that can make a difference, and he’s encouraged by the number of young professionals he sees moving in. “I’m a big fan for the possibilities for our urban core.”