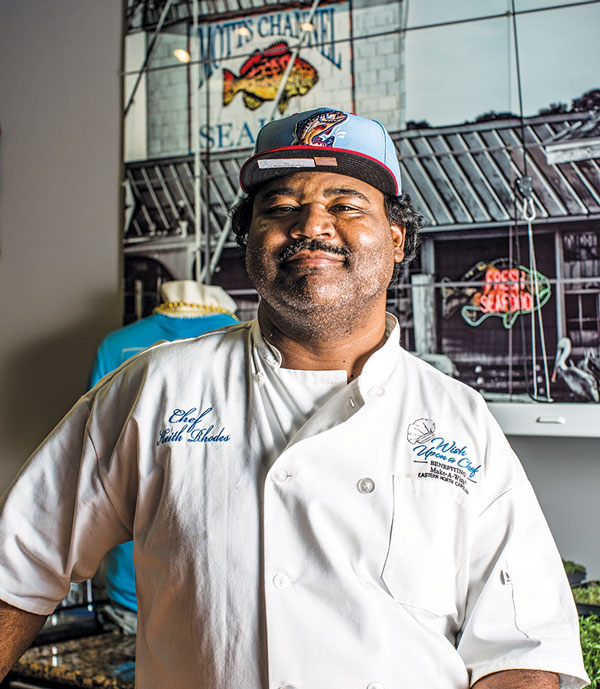 Keith Rhodes (Photo by Megan Deitz)
The restaurant industry is no place for people who are faint of heart. Eateries, whether fine dining, casual or anywhere in between, come and go at an astonishing rate. But the fear  of failure has not stopped Wilmington’s Keith Rhodes from trying new ventures.

Rhodes is best known in  the Port City as the owner and chef of the seafood restaurant Catch and its popular spinoff, Catch the Food Truck. More recently he has ventured into the consulting world, working with other restaurateurs on their undertakings.

“I might get a request from somebody who is opening a business, or they might need to just redo what is happening there,” Rhodes said. “I kind of hit it on any kind of level. Some  people need menus done, some people need labor and costs done, some people just need a lot of work. So that’s where I’m coming in. And it’s not just here in Wilmington. We travel everywhere doing that.”

The reasons for restaurants failing range from poor concept and management to lack of planning to inexperience in purchasing and hiring. Having experienced both failures and successes, the 45-year-old Rhodes can add perspective and assist consulting clients with best practices when opening or reviving their establishments.

People can have misconceptions “when it comes to operating any sort of food service, whether something as small as a soft-serve ice cream place or whether you’re talking about a five-star dining experience,” Rhodes said. “I don’t think that a lot of folks are properly planning when it comes to a long-term success when it comes to the restaurant.

“There are so many things you have to consider – your area, location, demographic, menu, cost – so many different factors … If you aren’t considering everything, you can find yourself on the short end of the stick, meaning your business is closing real soon.”

In his culinary career, Rhodes has been a James Beard Foundation nominee for Best Southeast Chef. He even competed on the popular Bravo  show Top Chef. But the ability to concoct and prepare high-quality food is just a small portion of the larger restaurant-business pie.

“Interacting with a customer and customer satisfaction is something that has to be at the core of everything,” Rhodes said.

A lifelong Wilmingtonian, Rhodes served as a chef at some of the city’s best-known restaurants prior to opening Catch. Along the way, he learned what worked and what didn’t.

“When I first started, there was a lot of planning,” Rhodes said. “I was afforded the opportunity to work in a couple of different venues where I could learn a lot. So ultimately one day when I wanted to strike out on my own, I kind of knew exactly the path that I wanted to walk.”

And while Catch, now in its 12th year, has enjoyed longevity and growth, not every one of Rhodes’ undertakings has seen the same success. But he hopes to help others over some of the hurdles he fell short of clearing.

“Just like anybody who runs a marathon, you prepare for it, you train for it,” Rhodes said. “There are going to be certain things that come along that way that might injure you. For instance, you’re a great marathon runner, but then you catch a cramp. That’s only temporary, but it can be a setback when you are running the race.”

As with many people who find success in their lines of work, Rhodes is looking to build upon what he has created.

He plans to open a food hall on Market Street in 2019, joining a trend that has been catching fire  around the country.

“We have been working with a developer, and we are going to try to break ground somewhere around January,” Rhodes said. “I’m going to occupy a couple of the stalls myself, and then we are going to bring in some other local  talent to occupy some of the other stalls. It is going to be a classic, new-American food hall.

“I’m going to bring back  Phun, the noodle bar we had downtown. We are going to have a juice bar. It will probably hold 100  or so customers,” he added. “We are super excited to bring that to Wilmington.”

And Wilmington is what drives the engine for Rhodes, his wife and business partner, Angela, and their two grown children who work in the family business.

“I try to share as much as I can with a lot of new guys who  come to the community and open up restaurants,” he said. “I do whatever I can share to make them successful, so we can have a strong community of restaurants and food offerings here.”