C-Suite Convo: Head In The Cloud 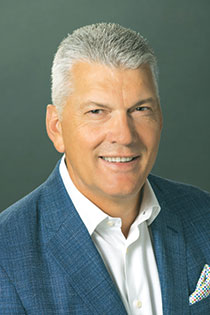 The company, whose cloud-based Bank Operating System is built on the Salesforce platform, has since signed on more than 200 banks worldwide, 11 of them among the top 30 U.S. banks by asset size.

Headquartered in Wilmington, nCino has about 550 employees with plenty of room to grow. CEO Pierre Naudé has been with nCino since its early days. Below is an excerpt from a recent conversation about the company’s rapid rise and future plans.

From day one with ncino, you guys envisioned it being the worldwide leader in cloud banking. So to start off, where are you on that goal?
“I wouldn’t say we’ve achieved it, but we are well on our way. If you look at the company’s growth, we started actually as a commercial loan origination solution – to solve that one problem for a bank. We always have this bigger vision: We’re going to do more functions.

But so if you look at the growth of the company, it literally was become the very best in a commercial loan solution. And then [after we did] that for community banks, then we moved on in late 2014, early 2015 to do it for larger banks in the U.S. to span the full market. And then we start adding solutions. …

In 2017, we opened the London office. We’ve got people in Toronto now. We just opened the Sydney, Australia, office, and out of London we cover South Africa as well. All of that work is beginning to pay off with very nice opportunities that we believe we’ll close in the final six months of the year.

So I would say in the U.S., we are clearly the market leader today. I would say internationally, we have to prove that, but the signs are very good.”

So it just depends on the year and how the numbers play out. But to be quite frank with you, a success story like this, with this level of growth is difficult to predict. You hope you could get to this level, and it’s a very positive scenario.

But I’m pleasantly surprised how it came together.”

What was it that got you in interested initially enough to move here and start this?
“Quite frankly, in 2011, I said no more than once when they asked me to do this purely because I know the energy it takes and the effort it takes to make this thing work to this extent. Plus, I was occupied in the previous company.

… When I first saw the platform and began to understand the power of the cloud and how that would revolutionize the way people consume computing resources, and the flexibility the cloud gives you and the agility for the enterprise – that’s what’s truly did it.

If you told me that this is just another loan origination company built on older technology, I would have said, ‘What’s going to differentiate you?’ …

What happened actually was, we had to work hard in the early years to convince people the cloud was safe and other benefits. But once the momentum swung over to the cloud, it became a massive differentiator and a competitive advantage. And then your competitors can't pivot fast enough, because they’re not cloud based.

There's actually a saying in the cloud computing world that if you aren’t born in the cloud, it's very difficult to be a true cloud company. And we can see it because it permeates throughout the culture of the company, the way we think about things, the way that solutions are architected and the way our banks buy it and consume it.

So I just think that that massive change in the technology platform really convinced me that this was worthwhile."

Earlier this year nCino recently raised nearly $51.5 million in a funding round led by Salesforce Ventures, the corporate investment group of Salesforce, with participation from another existing nCino shareholder. Last year it raised $17.8 million through a private equity offering. (For info on all it has raised since forming, click here.)
We’ve covered the investments in the recent years with significant rounds of funding. Has that panned out the way you hoped?
“We are very, very fortunate. We’re actually almost too well capitalized … In the very early years we did the friends and family in Wilmington and got some fantastic support in the local community.

And then after two years, Chip [Mahan, Live Oak’s chairman and CEO] had great connections in the market. He is the best I’ve ever seen at raising capital. So we got Wellington Management and Salesforce Ventures in. Then after that, you know it really comes down to execution because you project the future as you sell to these people why to invest in the company. …

And the proof was in the pudding, and how the company was growing, that actually drives the subsequent investment rounds. Right now we are well funded and don’t need more funding at this stage unless there’s some strategic events. But for the way we grow the company organically now, we will not need another round of funding.”

Is there any interest in going public at some point?
“I would say it’s more of an option. … Why do people go public? It’s either because their early investors want to cash out at some point, take their money off the table, the company gets too mature for them, or you want to raise capital to do some strategic things.

At this stage, we don’t need any of those events to do that. We’ve got the patience. We’ve got great investors; they will let us ride this thing as long as we can. Being private gives you that flexibility to maneuver as fast as you want to. We’ll see what the future holds, but there’s no imminent reason to do it.”

nCino’s employees are currently based out of the former Wachovia building on Parker Farm Drive in the Mayfaire area. The company expects to take up that entire building by the end of the year and plans to move into half of nearby The Offices at Mayfaire IV building and all of The Offices at Mayfaire VI building.
Why did you want to expand your footprint here and not next to Live Oak [whose campus is in midtown on Tiburon Drive]?
“In the early days, we actually did sign a lease with Live Oak, and the plan was to go there.

In 2014 two things happen. The first one is the feds came in and started separating the bank from nCino because No. 1 the software exerts a great influence on how the bank was managed. And the regulators see that as an institutional threat to the bank, and they must make sure the bank is safe, that we don’t have influence over the bank. …

The second one is the bank started growing so fast, they actually needed the footprint. And then I didn’t have time because we were growing so fast to actually build buildings on both campuses. It was literally a coincidence that this building became available, and we rushed over here, started looking at the second floor and took the whole thing – took an option on everything – to get me through this rapid growth phase.

There is a point that the people growth will slow down, the company growth will continue on, but you only need so many people in this location, etc., and the rate of growth will be slower. And then you can start doing long-term plans. We were just lucky that all those things coincided. So now I think when we’ve got this whole [former Wachovia] building plus those [two other Mayfaire buildings] we’ll be able to handle 750 to 800 people in these three buildings."

Do you foresee the expansion continuing in Wilmington?
“As far as the U.S. this is headquarters, and we plan to just continue growing here. All our product development’s here in the U.S.; all of our support teams are here.

So yeah, this will be the home office for the foreseeable future. I don’t see a compelling event or reason right now to open a second office organically. You never know if one day we buy a company, that’s a different location or something, but there are no plans like that.”