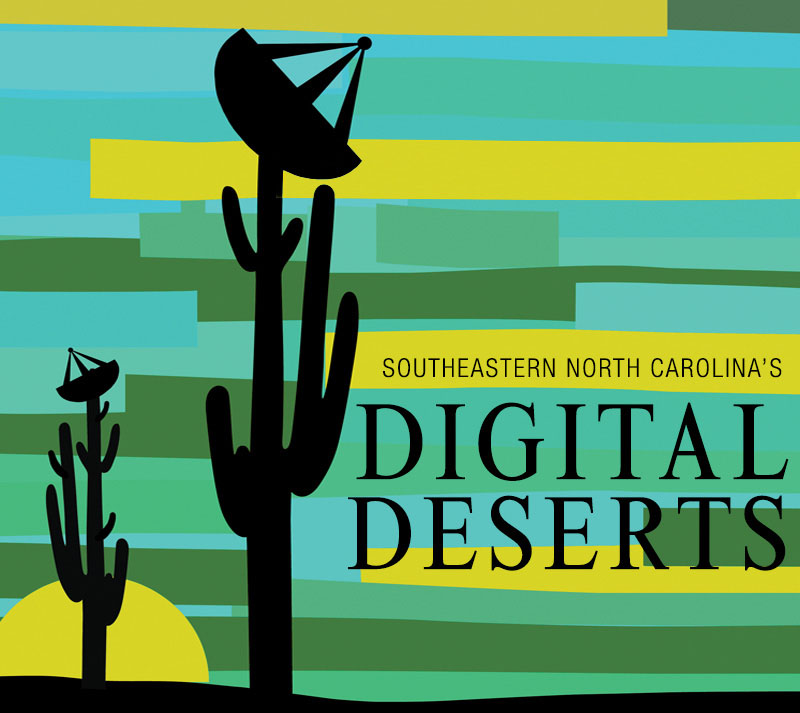 With talk about the need to improve roads, bridges and rail lines in North Carolina to boost commerce, another type of economy-related thoroughfare is getting some attention. That would be the information highway, a busy avenue of commerce in areas that offer broadband – otherwise known as high-speed internet access – and almost totally lacking traffic elsewhere.

Southeastern North Carolina is a striking example. Residents of New Hanover County and coastal areas in Pender and Brunswick counties enjoy the benefits of what is increasingly regarded as a necessary utility; many of their rural neighbors do not.

“The major issues I see are: Lack of service limits citizens from developing home-based businesses and keeps [home-based businesses] from moving here, and it prevents telecommuting or working from home,” said Pender County Manager Randell Woodruff, speaking of his county’s western portions. “Existing businesses don’t have adequate access either to expand their outreach. School children can’t adequately work on their assignments from home.”

The problem is nationwide and has gotten federal attention, as a recent news release from the U.S. Department of Agriculture made clear.

“80 percent of the 24 million American households that do not have reliable, affordable, high-speed Internet are in rural areas,” the release stated, quoting a 2018 report by the Federal Communications Commission. “Without e-Connectivity, rural Americans cannot reach their full productivity in the workplace, receive the best education in schools nor the finest health care in hospitals.”

In announcing a new program to address the need for rural broadband, USDA Secretary Sonny Perdue said that the U.S. Department of Agriculture is launching an e-Connectivity Pilot Program, funded with a $600 million Congressional budget appropriation earlier this year to “catalyze private investment and bring broadband to unserved rural areas of the country.”

“I have traveled extensively across the nation, and everywhere I go I have heard how important broadband is to rural Americans,” Perdue said in the announcement. “Reliable and affordable Internet e-Connectivity truly is the key to prosperity in the 21st Century, and I’m pleased Congress recognized this need and has provided this critical funding. Broadband e-Connectivity is the next interstate highway system of global commerce, and connecting rural areas to broadband will be a game-changer for our entire nation. It is not just a federal issue; our success will be forged through partnerships.”

Shallotte-based ATMC, a member-owned communications cooperative, hopes to become a partner. It plans to apply for a grant from that funding pool to expand its high-speed internet services.

In its mandated service area – about 70 percent of Brunswick County – it has “edged out on its own dime” to provide internet services to customers, said Jody Heustess, ATMC’s vice president of marketing and customer care.

To bring high-speed to areas where carriers such as AT&T and Spectrum won’t make the investment because low customer density makes it unprofitable, ATMC needs partners.

“We would like to go further into Columbus County for the underserved and unserved,” Heustess said. “It takes $35,000 to $50,000 per mile to install fiber optics. There is no way, being a small, local company, that we can do it ourselves. And these areas are cashstrapped communities; they need the internet for their future, but they are at such an economic disadvantage.”

ATMC is already spreading its high-speed internet services – some of it through state-of-the-art fiber-optic cable – to sparsely populated areas of Brunswick County. The cooperative has managed this by using the profits  it makes in high-density communities such as Leland, Southport and St. James to offset the cost of rolling out service to low-density areas.

Recently, it brought service to all nine households in a tiny community along N.C. 211 at a cost of $125,000, Heustess said.

Pender County also is looking at the USDA grant program, as well as a new grant program developed jointly by the U.S. Department of Commerce and the U.S. Department of Transportation that will offer up to  $110 million to help states, territories, tribal organizations and the District of Columbia upgrade their 911 call centers to what the government terms “Next Generation” capabilities.

These capabilities involve the use of IP (Internet Protocol)-based, broadband-enabled technologies to coordinate emergency responses, according to the announcement.

“Today, 70 to 80 percent of all 911 calls are placed from wireless phones, but most 911 call centers rely on decades-old networks capable of carrying only voice calls and limited amounts of data,” the annoncement stated. “The call centers have not kept pace with advances in consumer technology, and as a result cannot support callers who wish to send text messages, images, video, and other communications that utilize large amounts of data.”

And there is a new source of grant money at the state level as well, said Bill Holmes, director of legislative and public affairs for the  N.C. Department of Information Technology.

“In the past legislative session, the legislature approved a new $10 million grant program that allows our Broadband Infrastructure Office to  work with private companies to cover the costs of expanding high-speed services to rural communities,” he said. “This won’t allow us to address all of the need in the state, but it is a start, and we hope the program will grow. We are still designing the program but will have more details soon about how it will work.”

Holmes noted that Gov. Roy Cooper initially had proposed $20 million for the grant program, recognizing that broadband access needs to be improved in rural North Carolina.

“It’s a challenge our Broadband Infrastructure Office has been working  on for a while. We’re glad to have a grant program now that will at least start to address the need,” Holmes said.

The new grant program enables the Broadband Infrastructure Office to  work with private companies to cover broadband expansion costs. That is because there is a law in North Carolina – and similar ones in 20 other states, according to a 2016 report from the Education Commission of the States – that inhibits local governments’ abilities to become high-speed internet providers to their rural residents.

Pender County has no member owned communications cooperative like ATMC. Most of the county, however, is served by Four County Electric Membership Corp., which also covers portions of Bladen, Duplin and Sampson counties. The EMC, according to Woodruff, is “working diligently” to bring broadband to its service area.

Four County has made some strides. Burgaw has high-speed internet services, and all the schools in western Pender County have broadband, benefiting instructional activities during the day. But that changes when students return home.

“Generally, lack of broadband access in Pender is an inhibitor for K-12 education as students aren’t able to access a larger array of resources that may be available to them in other areas through online connection,” said Kyle Breuer, Pender County’s planning director. “Curriculum is limited to textbook resources for out-of-school work, which is a disadvantage to their education.”

Breuer also emphasized the “inhibiting effect” lack of broadband  has on business recruitment and retention.

“As you know, e-commerce and access to online logistics is fairly standard in today’s economy,” he said. “Without access on broadband, companies may never investigate relocation or establishment in rural areas of our region. Some farming equipment relies on this basic technology, folks that may want to work from home, and other similar examples are concerns that Pender is trying to address.”

One bright spot is the Pender Commerce Park, home to Acme Smoked Fish and Empire Distributors. In October 2015, AT&T designated the site as fiber-ready, meaning that AT&T provides the bandwidth needed to support data-intensive services such as video, collaboration and cloud services.

Meanwhile, ATMC is midway into a three-year initiative, called Project 2019, that will connect over 4,000 homes in rural Brunswick County to internet with speeds up to 500 Mbps.

The cooperative also has a five year plan to put fiber-optic networks in every business community in the county, to help Brunswick attract and retain commercial enterprise. Thus far, it has covered Leland and Shallotte and is working on Oak Island and Ocean Isle Beach. Next year, ATMC aims to establish networks in Holden Beach, Boiling Spring Lakes and Calabash.

Heustess said that as Navassa develops, with the presence of the final section of Interstate 140, ATMC has plans to serve that community, as well as “any new, large influxes of customers.”

“We would like to expand into Columbus [County],” he said, “and will try to pursue all available opportunities.”