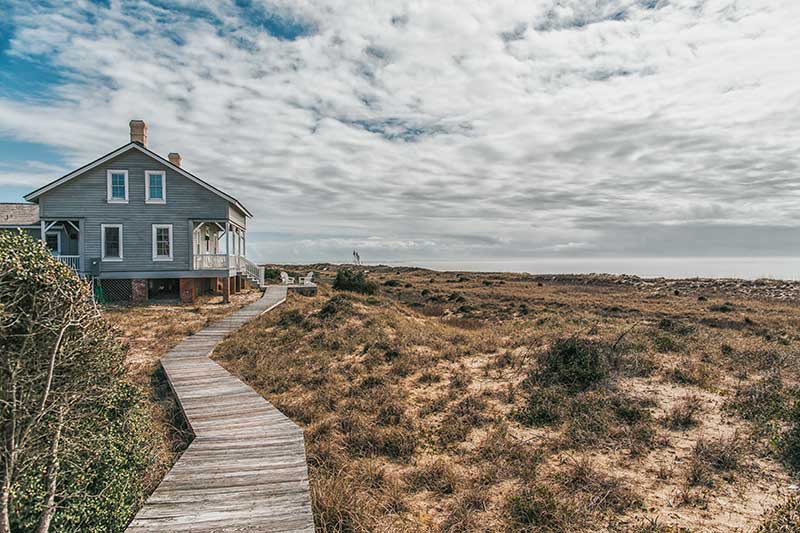 One of five boys, Cosgrove remembers taking a small boat from Southport to the Bald Head dock. Everything the family needed had to come over in the boat because there was little on the island except an old lighthouse and wild pigs.

The Cosgrove family trips to the island started when his parents were scouting out home lots. They wanted to build a beach house, and it was between Bald Head Island and Holden Beach. At the time, Bald Head was just a golf course and a few houses.

“My parents wanted something different,” Cosgrove said. “They liked roughing it.”

Cosgrove’s parents – Ken and Eleanor – chose Bald Head after a few trips and built the seventh house on the island in 1975 on Mourning Warbler Trail near the island’s South Beach. 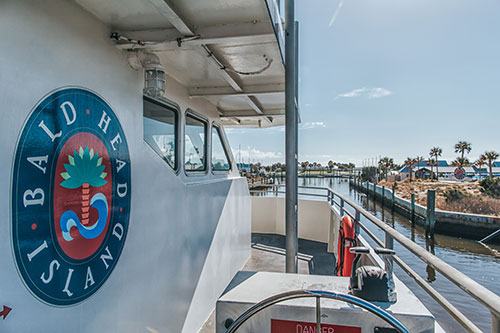 “That was a very risky endeavor,” Cosgrove said. “It took a while for people to take hold and trust it was going to be a success story. Gradually over time things snowballed. Once it became popular, it escalated very quickly.”

What started as a barren stretch of sand, maritime forest and marshes at the mouth of the Cape Fear River has evolved into some of the priciest real estate in North Carolina.

It's the natural beauty that makes the island special. That beauty is what brought the Cosgroves and others to the island and what Chad Paul, Bald Head Island Ltd.’s CEO, wants to preserve as the company divests many of its holdings and returns its focus to real estate.

“It’s all about the environment, to protect the natural beauty,” Paul said. “We’re selling a community. We’re selling being one with nature.” 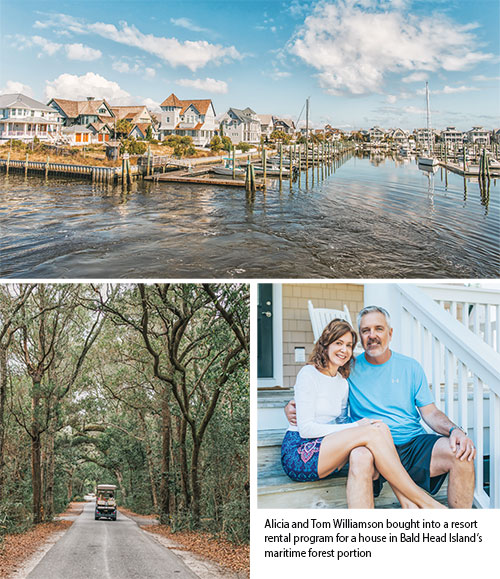 Bald Head Island has always been quiet. It was popular with smugglers and pirates before its transformation into an affluent community of 250 permanent residents that balloons to about 5,000 visitors and vacationers during the summer.

The Cosgroves’ first house had three bedrooms and three bathrooms. The family ran an old Army generator in the morning for about 30 minutes and then again at night for about an hour. Games were played and books read by candlelight or gas lamp.

“It was real primitive,” Cosgrove said.

It wasn’t until 1983 when George Mitchell purchased the island out of receivership that things started to change. The Mitchells brought electricity, which ended the island’s “Generator Society” as the first beach house owners on the island were known.

But, Paul said, the Mitchells also brought a plan.

Setting aside 2,000 acres for development, the rest of the island’s 10,000 acres was put in a conservation trust.

“It was an island (George Mitchell) didn’t want to see get wrecked,” said Paul, a Wilmington businessman who was tapped as CEO in 2010.

There is no construction on weekends, and the houses are often tucked into the maritime forest. Straight roads are almost nonexistent, except for Federal Road, created in the early 1900s to bring supplies down to the Cape Fear Lighthouse Station, which was demolished in 1958. (Old Baldy, the oldest standing lighthouse in the state, remains an island icon.)

Most of the roads zigzag around the trunks of ancient oak trees.

A restriction on combustible engines led to transportation by golf cart and the preservation of the island’s soundtrack of waves hitting the shore. Almost everywhere on the island sounds like the inside of a seashell.

“We were green before it became popular,” Paul said.

Bald Head Island is known for houses like the 5,514-square-foot, five-bedroom “Castello della Belena” – Castle of the Whale – that overlooks the beach. The house is on the market for nearly $12 million, making it the most expensive home for sale in North Carolina.

While the Castle of the Whale is out of reach for most vacation homebuyers, Bald Head Island isn’t. Of the approximately 1,260 homes on the island, Paul estimates that 400 of those participate in some type of resort rental program.

That’s how Tom and Alicia Williamson found their home. Tucked into the maritime forest, they own a portion of a vacation house at 22 Earl of Craven Court in The Hammocks development. Owners get four weeks a year on Bald Head.

“I feel like a child at my birthday,” Alicia Williamson said about when their weeks come up. “It’s an opportunity to get away from it all. It feels like a world away.”

Their favorite weeks are in the off-season when the island is just year-round residents, wildlife and quiet.

“There is a sense of real ownership when you’re alone out here,” Alicia Williamson said. 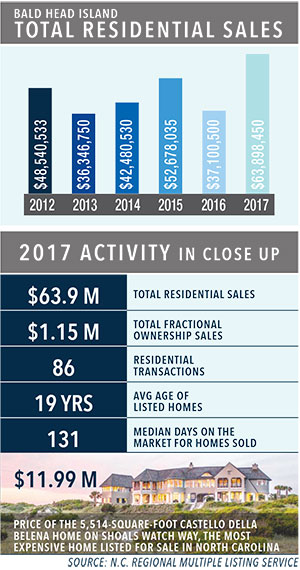 Maintaining the illusion of Bald Head Island being miles from the mainland is at the heart of Paul’s job. He is only the second Bald Head Island Ltd. CEO not affiliated with the Mitchells, the original family of developers.

Though Paul sat on Bald Head Island Ltd.’s executive committee before his appointment, he did not come from the typical real estate background that naturally feeds into running a property-focused firm.

When Paul took over, Merchant’s Row wasn’t fully occupied. But since the company has divested, there is 100-percent commercial occupancy and no business or tenant failures.

The company also shed its ferry business, which it ran for the past three decades to shuttle visitors and homeowners between Southport and the island. A state-authorized Bald Head Island Transportation Authority has been formed to take over the operations.

Bald Head Island Ltd.’s re-emphasis on development comes as home sales are on the rise.

Last year saw a significant increase in sales of residences, fractional ownerships and land islandwide, jumping from $50 million in 2016 to $80 million in 2017. And 2018 is looking strong as well. In the first couple of months of the year, Bald Head Island Ltd. had $9.5 million in sales, up $4.7 million from the same time last year.

“The improvements were due in part to continued growth in the U.S. economy, along with the higher island visibility created by the Southern Living Idea House at Cape Fear Station,” Paul said.

Like everything on the island, every detail down to the price point was planned. Houses for sale on the island had an asking price of around $1.2 million but were selling for closer to $630,000. Cape Fear Station houses sell in the $700s.

“The sweet spot for pricing Southern Living was to bridge the gap between the $1.2 million ask and the $630,000 average price in 2015,” Paul said. “Our aim was to deliver value that could bridge that gap. In hindsight, we executed perfectly.”

State Of The Island

As Paul drives around the island, he emphasizes his one mandate.

“Maintain the stewardship of the island,” he said.
That means less about the money and more about preserving the natural beauty and aesthetic. The birds, turtles and crashing waves sell Bald Head Island more than he can. It also means Bald Head 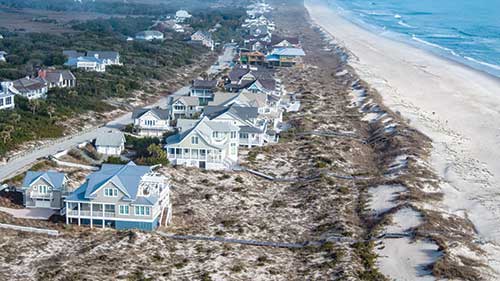 Island Ltd. is looking for partners like Claude Pope, who took over the Maritime Market, the island’s only grocery store.

Pope started coming to the island in 1988. In 2001, after his 40th birthday party, Pope was floating in the Atlantic and made a decision.

They bought a condo soon after and then a house in 2005. The move was complete when he sold his business in Raleigh in 2007.

He met with Kent Mitchell about loosening the island’s covenants so he could build a restaurant in a bed-and-breakfast but wound up with the market instead.

“You never want the island to lose the charm,” Pope said, “That blend of natural environment; develop it with care, not let it become the next Myrtle Beach.”

Cape Fear Station is a long way from Myrtle Beach. It also feels far away from the island’s Generator Society, but only in look, not intent.

The Cosgroves sold their first house in 1999 and built a new house in 2001. The second house sold in 2013. The family no longer owns property on the island, but Cosgrove and his family still visit often.

“We still love the island,” he said. “Back in the day, it was like nothing else in the country.”

Paul is working to keep the island a place that still feels untouched at times, whose soul is the same as when the Cosgroves first came in the 1970s, but also a viable business with a strong home market and merchants so that the Mitchells’ plan will last for years to come.

Or as Paul puts it: